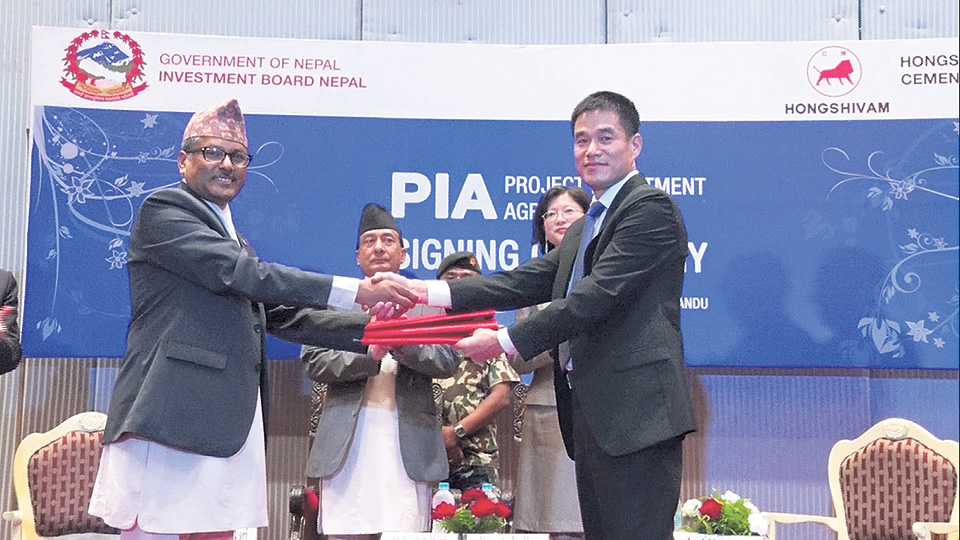 In this photo provided by Investment Board Nepal (IBN), Maha Prasad Adhikari (left), the CEO of IBN, is seen shaking hands with Lai Weipeng, the Director/General Manager of Hongshi Shivam Cement Pvt Ltd, after signing a Project Investment Agreement on Sunday.

KATHMANDU, Sept 3: The government has signed an agreement with a Chinese investment company to bring foreign direct investment worth US$ 251 million in a cement factory.

The agreement paves the way for Chinese company Hongshi Holding Group to form a joint venture with Nepali company Shivam Cement to establish a cement factory capacity to produce 6,000 tons. The joint venture -- Hongshi Shivam Cement Pvt Ltd - will invest US$ 359 million in the new plan that is expected to start operation within 36 months. It will have installed capacity to produce 6,000 tons of cement per day.

Hongshi Holding Group is the largest producer of building materials in China.

The Project Investment Agreement (PIA), signed on Sunday, has charted out rights and obligations of both the parties. “The contract provides high confidence to the company by providing protection to its investment,” a statement issued after signing of the agreement read.

The agreement will be in effect for 15 years. Ultimately, it will upgrade its production capacity to 12,000 tons per day.

The agreement was signed in the presence of Minister for Finance and Vice-chairperson of IBN, Gyanendra Bahadur Karki, and Chinese Ambassador to Nepal, Yu Hong.

Speaking at the signing ceremony, IBN CEO Adhikari termed the agreement historic. “It is the largest FDI in manufacturing sector so far. This agreement makes a long lasting relation with the foreign investors and we hope to deliver exemplary results,” added Adhikari.

The company will employ more than 1000 people during its construction period, according to the statement. “The project will provide high quality cement to the local market's demand and also create competition for quality of cement production in Nepal,” the company added.

The government has assured the investors that that the factory won't be nationalized and treated like all other national industries. Also, the investors will be allowed to repatriate the returns of the investment, Adhikari said, quoting the PIA document.

IBN officials said that the PIA document will be made public shortly.

Like other cement factories in the country, this factory will also get all the incentives announced by the government like construction of 132 KVA transmission line to the plant site and 40 kilometer road from quarry to the factory.

“All the provisions related to foreign investments and the cement factory enshrined in different laws has been congregated to make this comprehensive document. This document will also be applicable to other cement factories in the pipeline,” added Adhikari.

Sixty percent of the investment will be financed by Chinese financial institutions and also a consortium of banks in Nepal.

The country needs around 5 million tons of cement per year. According to IBN officials, around 20 percent of local demand is met through imports from India.

KATHMANDU, Jan 23: A Chinese private firm has bagged two major contracts to build hydropower plants in Nepal. This is the... Read More...

KATHMANDU, Jan 5: It is considered normal for travel companies to attract customers  with various attractive packages. They sometimes do not... Read More...

SC justices refuse to conduct hearing on Wednesday as well, hearing conducted only by CJ Rana’s single bench
22 hours ago

PHOTOS: JSP hits the streets demanding social justice and action against murderers of Bishwakarma
48 minutes ago