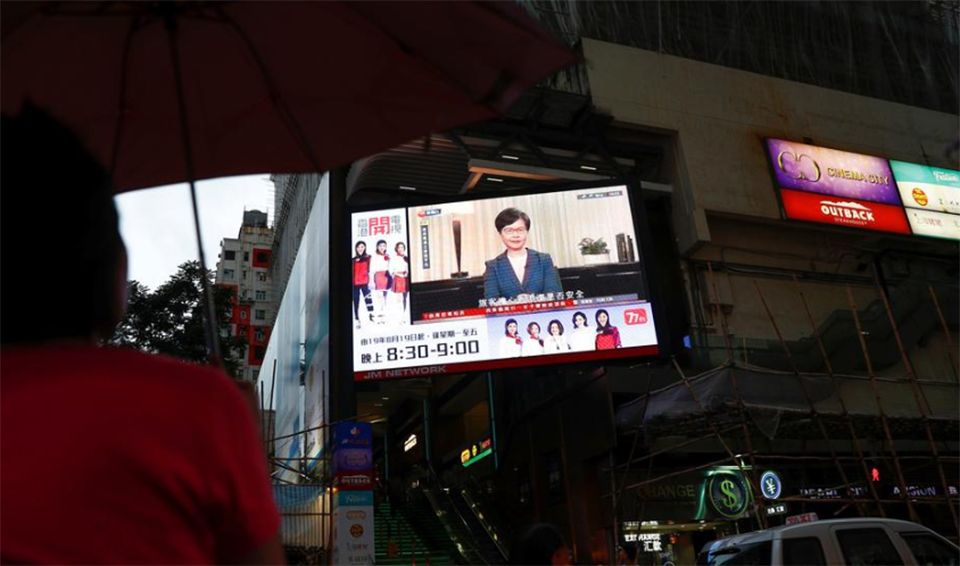 The announcement, live on television, came after Reuters reports on Friday and Monday revealed that Beijing had thwarted an earlier proposal from Lam to withdraw the bill and that she had said privately that she would resign if she could, according to a leaked audio recording.

“Lingering violence is damaging the very foundations of our society, especially the rule of law,” Lam said in her address on Wednesday.

The withdrawal, a key demand of protesters, came after unrest that drove the former British colony to the edge of anarchy as the government repeatedly refused to back down - igniting pitched battles across the city of seven million, the arrests of more than 1,000 protesters, and leaving a society deeply divided.

Many are furious at perceived police brutality and the number of arrests - 1,183 at the latest count - and want an independent inquiry.

“The government will formally withdraw the bill in order to fully allay public concerns,” Lam said.

“I pledge that the government will seriously follow up the recommendations of the IPCC’s (Independent Police Complaints Council) report. From this month, I and my principal officials will reach out to the community to start a direct dialogue ... we must find ways to address the discontent in society and look for solutions.”

The protests began in March but snowballed in June and have since evolved into a push for greater democracy for the city which returned to China in 1997.

The bill would have allowed extraditions to mainland China where courts are controlled by the Communist Party.

It was not immediately clear if the bill’s withdrawal would help end the unrest. The immediate reaction appeared skeptical and the real test will be how many people take to the streets.

“This won’t appease the protesters,” said Boris Chen, 37, who works in financial services. “In any kind of time, people will find something they can get angry about.”

One woman, Pearl, 69, said the protests were no longer about the bill.

“Some of those guys may change their minds, maybe, but just a minority,” she said of the protesters. “Some of them just want to create trouble and they will continue to do so.”

“Too little, too late,” said Joshua Wong, a leader of the 2014 pro-democracy protests which were the precursor to the current unrest, on his Facebook page.

The chief executive’s office did not immediately respond to a request for comment on the bill’s withdrawal.

Hong Kong's benchmark Hang Seng Index.HSI jumped after the report of the bill's imminent withdrawal, trading up about 4%. The property index also jumped.

Lam had said before that the bill was “dead”, but she did not withdraw it.

The protesters’ other four demands are: the retraction of the word “riot” to describe rallies, the release of all arrested demonstrators, an independent inquiry into the police perceived brutality and the right for Hong Kong people to democratically choose their own leaders.

CHINA’S WARNINGS
Hong Kong returned to China under a “one country, two systems” formula that allows it to keep freedoms not enjoyed on the mainland, like the freedom to protest and an independent legal system, hence the anger at the extradition bill and perceived creeping influence by Beijing.

China denies it is meddling in Hong Kong’s affairs but warned again on Tuesday that it would not sit idly by if the unrest threatened Chinese security and sovereignty.

China has regularly denounced the protests and warned about the impact on Hong Kong’s economy.

Cathay Pacific Airways (0293.HK) has been one of the biggest corporate casualties.

China’s aviation regulator demanded it suspend staff from flying over its airspace if they were involved in, or supported, the demonstrations. The airline has laid off at least 20 including pilots and cabin crew.

The airline on Wednesday announced the resignation of chairman John Slosar, following the departure of CEO Rupert Hogg last month.

Riot police fired beanbag guns and used pepper spray - both anti-riot weapons - to clear demonstrators from outside the Mong Kok police station and in Prince Edward metro station, with one man taken out on a stretcher with an oxygen mask over his face, television footage showed.

The police, who have repeatedly denied using excessive force, did not immediately respond to a request for comment.