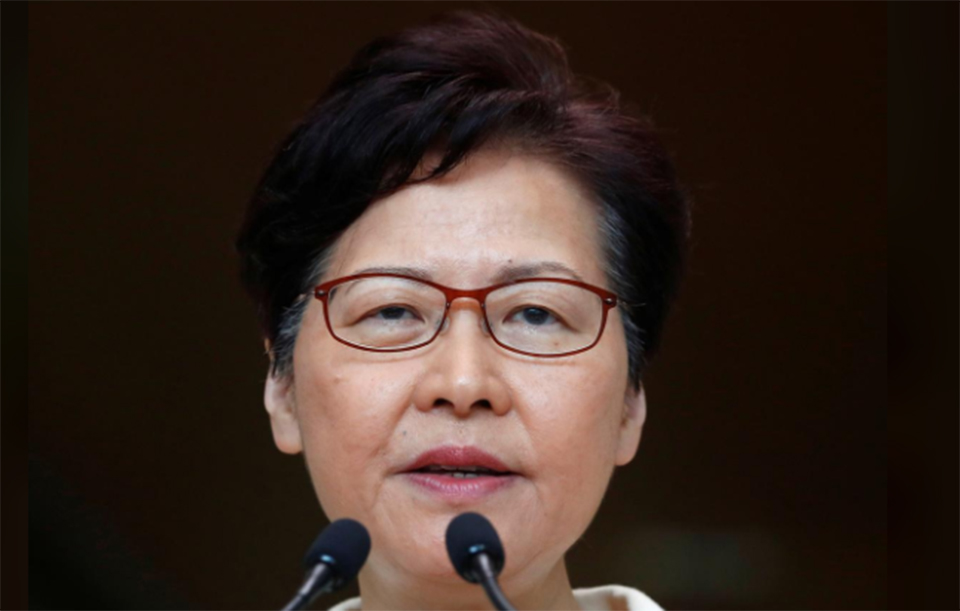 HONG KONG, Sept 3: Hong Kong leader Carrie Lam said on Tuesday she has never asked the Chinese government to let her resign to end the city’s political crisis, responding to a Reuters report about a voice recording of her saying she would step down if she could.

Hundreds of thousands of people have taken to the streets since mid-June in protests against a now-suspended extradition bill that could see people sent to mainland China for trial in Communist Party controlled courts.

Lam told business leaders last week that she had caused “unforgivable havoc” by introducing the extradition bill and that if she had a choice then she would apologise and resign, according to a leaked audio recording.

Lam, a lightning rod for protesters’ anger, told a televised news conference on Tuesday that she had never considered asking to resign and that Beijing believed her government could solve the three-months long crisis without mainland China’s intervention.

“I have not even contemplated discussing a resignation with the central people’s government. The choice of resigning, it’s my own choice,” Lam said.

“I told myself repeatedly in the last three months that I and my team should stay on to help Hong Kong ... That’s why I said that I have not given myself the choice to take an easier path and that is to leave.”

Lam added that she was disappointed that comments made in a private meeting, where she had been sharing the “journey of my heart”, had been leaked.

A spokeswoman for China’s central government said it fully supported Lam and the Hong Kong administration to use all lawful means to put an end to violent protests.

The growing unrest has evolved into a broader call for Chinese-ruled Hong Kong to be granted greater autonomy by Beijing, which has accused foreign powers, particularly the United States and Britain, of fomenting the unrest.

In the audio recording, Lam said that her ability to resolve the crisis was “very, very limited” as she had to serve “two masters” and the issue had been elevated “to a national level”, a reference to the leadership in Beijing.

But Lam said on Tuesday that her government had the confidence of Beijing and could bring an end to unrest itself.

“I think I can lead my team to help Hong Kong to walk out from this dilemma. I still have the confidence to do this,” she said. “Up till now, the central government still thinks (the Hong Kong) government has the ability to handle this.”

DEMANDS
Hong Kong school and university students were boycotting classes and holding rallies for a second straight day, calling for what protesters call their “five demands”.

Other than the withdrawal of the extradition bill, protesters want the retraction of the word “riot” to describe rallies, the release of all arrested demonstrators, an independent inquiry into the police and the right for Hongkongers to democratically choose their own leaders.

China’s Hong Kong affairs office said on Tuesday that anyone who harbours hopes of universal suffrage in Hong Kong would get nowhere as it went beyond the law.

Lam has said she was open to dialogue with protesters but has made no concessions on these demands.

“No matter she can step down or not, it doesn’t matter. Chief executive is still chosen by the central government. What matters is she refuses to response to the five demands. She’s an irresponsible leader.”

The weekend was marred by some of the worst violence since the unrest escalated more than three months ago, with protesters burning barricades and throwing petrol bombs, and police retaliating with water cannon, tear gas and batons.

Thousands of protesters blocked roads and public transport links to Hong Kong airport on Sunday. Some then targeted the MTR subway station in nearby Tung Chung, ripping out turnstiles and smashing CCTV cameras, glass panels and lamps with metal poles.

Police have arrested more than 1,100 people since the protests began, including high-profile activists like Joshua Wong, one of the leaders of the pro-democracy “Umbrella” movement five years ago that foreshadowed the current unrest.

Protesters are seeking greater democracy for the former British colony which returned to China in 1997 under a “one country, two systems” formula that guarantees wide-ranging autonomy, including the right to protest and an independent judiciary.

They fear those freedoms are being slowly eroded by Communist Party rulers in Beijing, a charge China denies.

With protesters and authorities locked in an impasse and Hong Kong facing its first recession in a decade, speculation has grown that the city government may impose emergency laws, giving it extra powers over detentions, censorship and curfews.

Lam said on Tuesday that her government was considering all legal avenues to solve the crisis.

Gold price increases by Rs 500 per tola
25 minutes ago