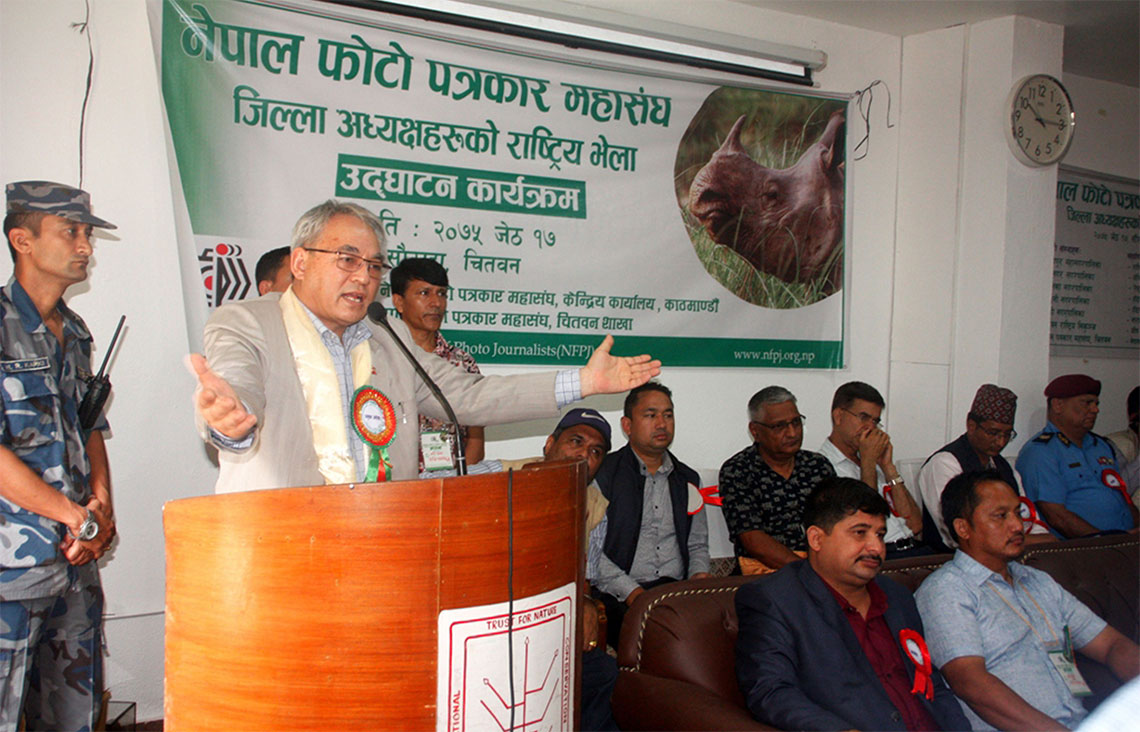 Home Minister Ram Bahadur Thapa delivering a speech at the national conclave of district chairpersons of the Federation of Nepali Journalists at Sauraha of Chitwan on Thursday. (RSS)

RATNANAGAR, Chitwan, May 31): Minister for Home Affairs Ram Bahadur Thapa has insisted on launching a sting operation against the corrupt people.

Addressing the first national gathering of Nepal Federation of Photo Journalists (NFPJ) at Sauraha of Chitwan on Thursday, the Home Minister urged the journalists to go against the corrupt and middlemen as they were impeding the development and prosperity of the country.

"It is necessary to launch a sting operation against those people mired in corruption who have sucked the country's economy hollow, whether they be in the courts or in various organisations or from different professions," he said.

Minister Thapa said it is necessary to make the photos of illicit drug peddlers, tax and revenue evaders, middlemen, smugglers and bureaucrats and capitalists who are committing corruption and anti-national. He drew the attention of the photojournalists to this need.

He also stressed that journalism should be for the development and prosperity of the country, saying the government was ready to work in collaboration with the journalists.

CPN leader and former Finance Minister Surendra Pandey said corruption is a key barrier to prosperity. He also said no one could seize the rights of journalists in democracy, while urging them to focus on economic development.

Acting President of the Federation of Nepali Journalists Bipul Pokharel recognised the role of photo journalists for a country change. The government should take a policy decision recognising the role of media in the course of prosperity plan being devised.

The gathering will also make public a Sauraha declaration today itself, said NFPJ treasurer Ratna Shrestha. Photo journalists and representatives from most of NFPJ's branches in 52 districts have participated in the meeting. (Photo available)

POKHARA, Dec 9: Minister for Population and Environment Jayadev Joshi has stressed the need of unity among the political parties... Read More...

KATHMANDU, Sept 1: Minister for Population and Environment Jaydev Joshi has said the use and promotion of renewable energy including... Read More...