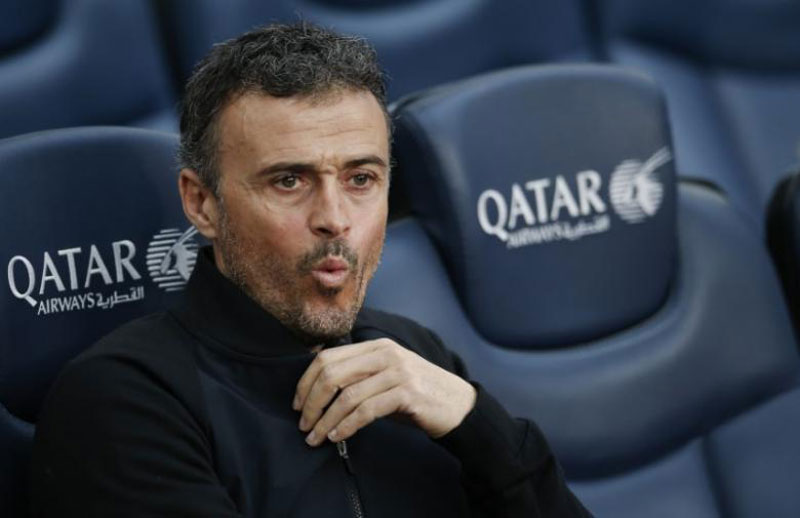 Barcelona coach Luis Enrique is looking for the team's fans to push it through against Atletico Madrid on Tuesday, when the Catalan club will try to reach the King's Cup final for a fourth straight year.

"I'm convinced we will need the support of our fans," Luis Enrique said in a news conference Monday. "We hope it will be a special day for us."

Samuel Umtiti, Jordi Alba and Lionel Messi are one booking away from suspension, but Luis Enrique says his players will not hold back.

"I don't believe it will condition them, because they are experts when it comes to these types of games," he said. "Besides, our main aim is to progress."

Barca have won the Cup a record 28 times, including the last two seasons under Luis Enrique.

"Since the start of the season, we have set our aims to the top, to win all the competitions," he said. "It would be the cherry on the cake to beat a very difficult rival like Atletico and reach the final."

Atletico, who have not won at Barcelona since a 3-1 victory on Feb. 5, 2006, need to score at least two goals to progress.

"I hope Atletico have to wait one year more to win here," Luis Enrique said.

Goals from Luis Suarez and Lionel Messi gave Barca a 2-1 win in last week's first leg in Madrid. The team are now undefeated in their last nine matches in all competitions.

Saturday's 3-0 home victory over Athletic Bilbao kept them second in La Liga and closed the gap to one point on leaders Real Madrid, who have played two fewer games.

With Neymar suspended, Luis Suarez is expected to return to the starting 11 after resting at the weekend, one of six changes Luis Enrique made.

Gerard Pique has recovered from a thigh injury suffered against Athletic and trained on Monday.

Atletico Madrid will have to win at Barcelona's Nou Camp for the first time in a decade on Tuesday if they are to reach the King's Cup final.

The only way for that to happen, coach Diego Simeone says, is for his players to deliver a high-intensity game in order to overturn a 2-1 semi-final first-leg deficit and eliminate holders Barca.

Atletico are aiming for their first Cup final appearance since the 2012-13 campaign, when they won it.

"The only result that would satisfy me is to reach the final," Simeone told Monday's news conference. "We need to play with the same high intensity we have shown at certain times of the season."

Atletico were on the back foot last week after goals from Luis Suarez and Lionel Messi gave Barca a 2-0 lead in the first leg, though a strong second-half display and an Antoine Griezmann strike gave Simeone's side a glimmer of hope.

Having not won at Barcelona since Feb. 5 2006, Atletico need two goals to progress.

"The reality is that we are facing a very strong team when playing at home," Simeone said. "The best in the world, probably. They will be ready for our high pressing and prepared to hit us on the counter-attack."

Barca won 3-0 at home to Athletic Bilbao on Saturday despite resting six players ahead of Tuesday's game against Atletico.

"The way they have prepared for the game by resting six players at the weekend, I expect the best Barca," Simeone said.

Atletico will not have team captain Gabi for the game because of suspension and Ghana international Thomas has been tipped to replace him in midfield.

"Gabi is the heart of the team," Simeone said. "We hope we can overcome his absence. Thomas is an option to consider."

Atletico veteran forward Fernando Torres, whose two goals earned Atletico their last win at Barca, could get his second consecutive start on Tuesday.

Torres scored both goals in Saturday's 2-0 home triumph over Leganes which kept Atletico in fourth place in La Liga on 39 points.