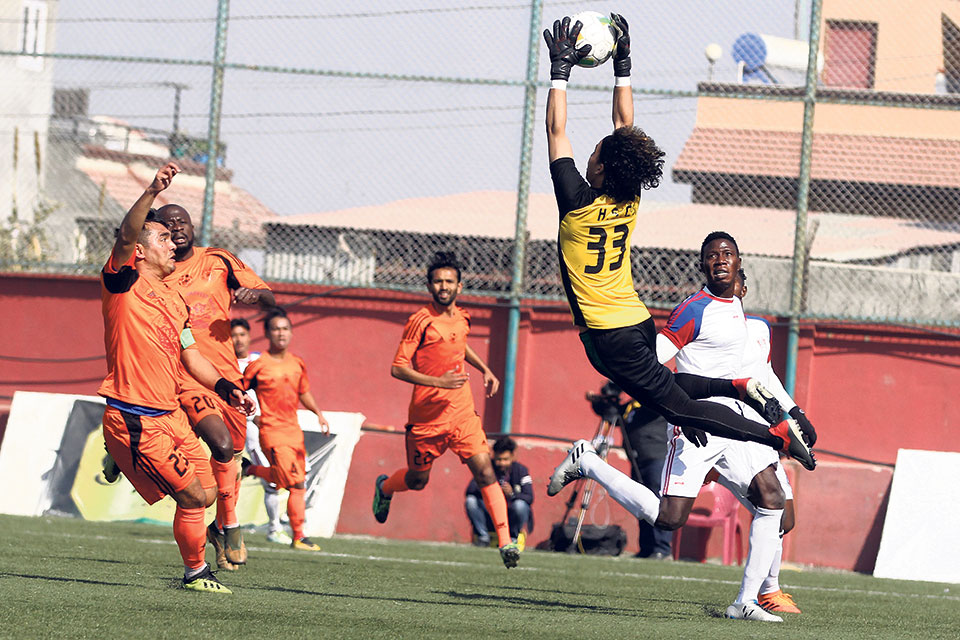 KATHMANDU, Dec 27: Himalayan Sherpa Club has moved up to the fifth place registering its fifth win of the season after thrashing struggler Brigade Boys Club 4-1 in the ongoing Martyr’s Memorial A-Division League in Lalitpur on Wednesday.

At the All Nepal Football Association (ANFA) Complex in Satdobato, a brace from Bishwas Shrestha and a goal apiece from Goha Patrick Privat and Bhisan Gurung sealed the win for Himalayan Sherpa. Bartaman Rai scored a consolation for Brigade Boys.

Brigade Boys looked really up for the game in the first half with constant attacking threats, but Himalayan Sherpa recovered the attacks with brilliant defensive displays.

Abdu Kareem Hamod Nsiah got a chance early on in the game in the fifth minute, but his chance of opening up the score was brilliantly dealt by the Himalayan defense line.

ajudeen Adekunle Busari provided a good pass to Kazeem Adegoke Busari, who tried a chip ball, but could not hit the target in the eighth minute.

Karna Limbu got a chance for Himalayan, but his shot from outside the box was blocked by a Brigade defender in the 11th minute.

Brigade got another try at goal when Ritik Khadka passed the ball to Kazeem, but his shot went just wide of the target, while Shishir Lekhi provided a cross to Kazeem, but he could not provide a stern finishing in the 18th minute.

Khadka got a chance for himself in the 23rd minute, but his shot from outside the box went distantly wide.

Limbu was the mode of attacking for Himalayan Sherpa and yet again he was in thick of things. He got a strong shot on target in the 40th minute, but the Brigade keeper Sagar Raya managed to get a touch. Raya could not gather the ball safely, but managed to pounce afterwards.

The first half ended with constant attacking from both the sides, even more with Brigade, but the failure to score meant the team went on in the second half with much to do. The luck was not in Brigade’s side, as it went on to concede four second half goals.

Himalayan Sherpa surely came with the scoring boots in the second half as Privat scored in the 46th minute. Dady Junior Wamba gave a pass to Privat, and he managed to get a right footed shot from close range to open the scoring.

Gurung was the next to score for Himalayan as he hit a shot from outside the box in the 51st minute which was nearly saved by Raya, but the poor handling saw the ball going in.
Shrestha managed to score a brace with brilliant attacking instincts. Limbu took the ball away from the Brigade defenders, and passed to Shrestha, who shot from near the penalty box in the 61st minute to make the score 3-0.

Shrestha scored again 10 minutes from time after Privat passed him the ball and he hit a shot from the center of the box to send the game beyond all doubt.

Brigade got a consolation in the 87th minute as substitute Bartaman Rai scored from a Sujit Budathoki cross.

In the other match played later on the same day, Jawalakhel Youth Club registered double-digit points with a 2-1 win over Machhindra Club.

Two goals within the space of 10 second-half minutes helped the team defeat Machhindra, whose consolation in the 90th minute was not enough to deny yet another loss for the struggler.

Jawalakhel took the lead from the penalty spot after Machhindra’s Anjan Devkota controlled the ball with his hand in the penalty box. Aruj Singh stepped up to take the kick, and delivered properly in the 55th minute.

Just 10 minutes after that, Fode Fofana converted in a Suman Dangol cross to double the lead for the dominating team.

Alaba Ademola Aderibigbe scored a consolation for Machhindra in the 90th minute.
With the win, Jawalakhel has moved up to the ninth place with 11 points from as many games, while Brigade Boys is languishing at the 13th place with six points with the same number of games.

Also, in the other match played at the Armed Police Force (APF)’s Halchowk Stadium in Kathmandu, New Road Team could not escape the bottom despite leading Friends Club, but eventually had to settle for a 1-1 draw.

New Road led with an own goal from Friends’ Bobby Ogolla after Sushil Lama hit a shot and the ball got deflected off Ogolla in the 44th minute.

Failing to hold on the lead for the last 12 minutes, New Road had to share a point as Ashim Bhusal headed in a free-kick taken by Anil Maharjan in the 78th minute.
With the result, New Road is still at the bottom with five points from 11 games, while Friends in 11th with nine points.

KATHMANDU, Aug 6: The All Nepal Football Association (ANFA) has announced a 31-member team in the initial phase to play... Read More...