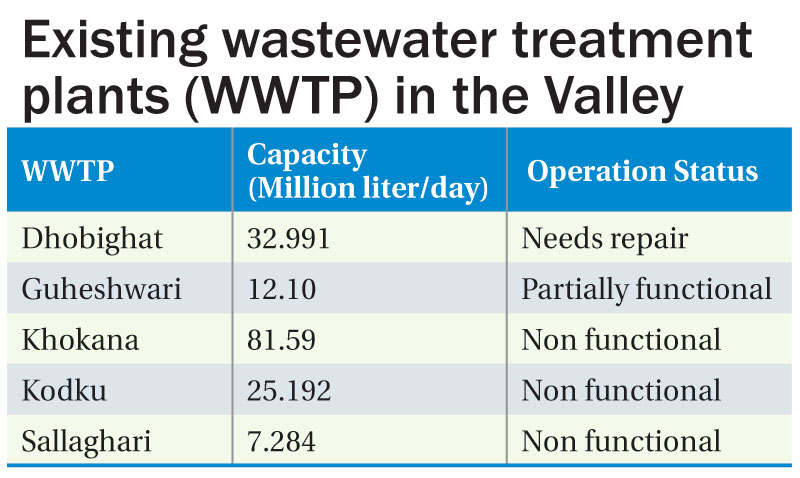 The treatment plants were installed in five locations Dhobighat, Guheshwari, Khokana, Kodku and Sallaghari some three decades ago. All of them have remained dysfunctional due to lack of timely repair and maintenance, according to the KUKL.

Out of the five, the reconstruction of Guheshwari and Hanumante wastewater treatment plants has already started while that of the remaining three plants is expected to commence after three months, Surya Raj Kandel, Senior Divisional Engineer at PID told Republica.

The PID had concluded the detailed feasibility study to reconstruct WWTPs two years ago. The KUKL has estimated that the project will require a budget of $13.4 million.

“Two plants are under construction at present and we are planning to complete all five projects within three years,” he said.

It is estimated that 500 million liters of wastewater is produced per day in Kathmandu and all this directly gets discharged into the rivers.

“The decision to construct the plants is very imperative as the river waters in the Valley are highly contaminated and harmful for the environment as well as humans if consumed,” he Kandel.

The treatment plants are designed to be eco-friendly and will help make rivers free from odors. The PID has also planned to develop public parks around the plants premises.

Asked about the lack of maintenance of existing plants, Janak Bhusan Dhaubhadel, section officer at the Department of Water Supply and Sewerage (DWSS) indicated lack of budget.

“Every year the department gets a budget of Rs 40 million but the allocated budget is not sufficient to build and repair sewage treatment plants,” he said.