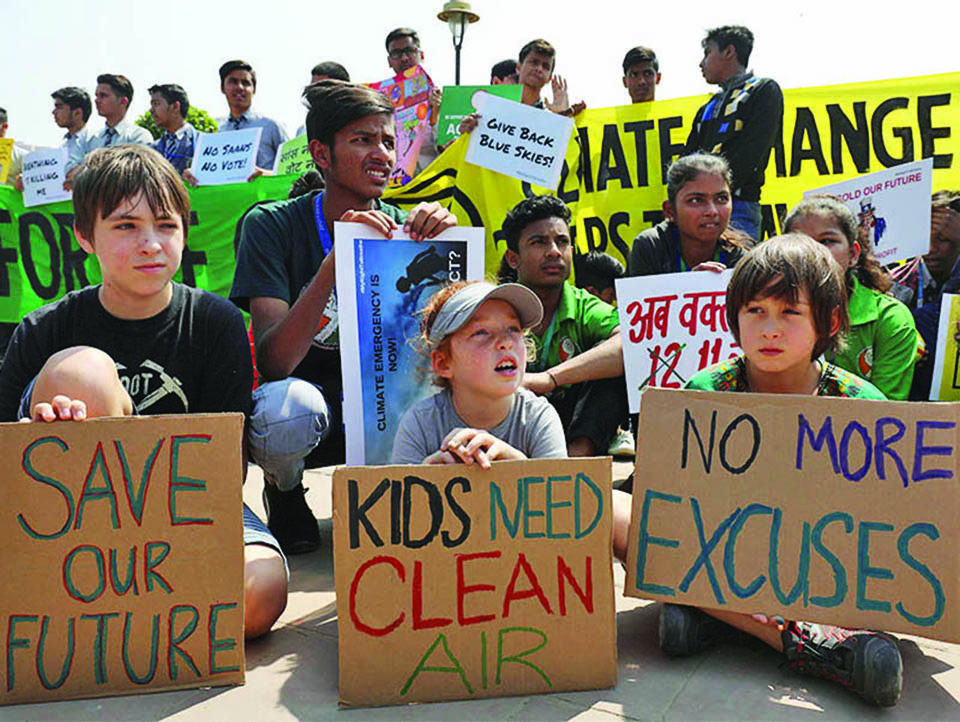 On September 20, when everybody’s attention was on Tudikhel where the government had organized an official event for the celebration of Constitution Day, in Maitighar and Baneshwar, some youths gathered with placards and banners that read: “Climate is changing, why aren’t we? #Friday for Future.”

The gathering and demonstration of youth and children was not in favor or against the celebration of constitution day. They were there to mark the Global Day of Climate Action.

The global event marked for a week and considered to be the largest climate action in history was inspired by a Swedish teenager Greta Thunberg who has been taking time off school every Friday to demonstrate outside the Swedish Parliament as part of her ‘Friday for Future’ campaign.

According to the reports, over four million people took part in 5800 protest events in 161 countries urging political leaders to combat climate change. The global strike of youths and students sent a clear message that their future shouldn’t be messed up and immediate climate actions should be taken. In Nepal, the event was marked in five cities where youths demanded climate justice, a shift toward alternative energy, and eco-friendly development.

Flawed policy
Government of Nepal, on September 3, promulgated Climate Change Policy (2019) to update and replace the Climate Change Policy of 2011. Unlike the aspiration of the current youth climate movements, the new climate change policy failed to meet the expectations of youth and children in Nepal.

When it comes to the agendas like climate change and environment, the future of young generation should be of prime concern and at the same time, the policy should address the gaps and challenges of the initiatives taken in the past. The Climate Change Policy of 2011 failed to develop a national strategy for carbon trade, assess the loss of climate change, and develop a monitoring and evaluation indicators to assess the implementation of the policy. Unfortunately, the new policy leaves such gaps behind.

The new policy has been framed under nine thematic sectors and four cross-cutting themes and defines the roles of federal, provincial and local governments. In this regard, the policy looks comprehensive. However, the policy neither quantifies any target nor sets any timeline for achieving the policy goals. This has made the policy very ambiguous in terms of monitoring and evaluation. The policy would look more specific and realistic had the priority strategies been identified and targets set under each theme. The major drawback of the climate change policy is that it speaks very less on the means and procedures of policy implementation and ignores the integration of the global commitments such as Sustainable Development Goals and Sendai Framework for Disaster Risk Reduction into thematic policy and strategies, thus leaving numerous implementation bottlenecks and doubts on making a real impact.

Youth expectations
The new climate change policy was going to be adopted in the light of the findings from two important reports. First, Report on the Climate Change Scenarios for Nepal published by Ministry of Forest and Environment which states that the mean temperature of Nepal could increase by 0.9–1.1°C by 2045 and 1.3–1.8 °C by 2065. And second on ICIMOD’s report on Hindukush Himalaya which has alarmed that one-third of the ice of the Himalaya will melt away by the end of this century even in the best-case scenario.

Therefore, young people were expecting an aggressive policy that would focus on mountain agendas, set clear targets for national emission reduction especially from the transportation sectors, define milestones for transforming fossil fuel-based transportation to a cleaner electricity-based transportation, and seek strong collaborations with other least developed mountainous countries to demand for the compensation of loss and damage inflicted by climate change. But the policy failed to set the expectations of the young climate activists of Nepal.

Young people expect climate change policy to promote innovation. For example, by providing incentives to the clean enterprises that aim to reduce emissions and mitigate climate change, scaling up the innovation in climate change adaptation technologies, and rewarding young people who have made a significant impact in their communities to help mitigate and adapt to the climate change. Young climate activists have emphasized that newly formed municipalities should be designed and developed as people-friendly cities and that the development shouldn’t be oriented toward building car-friendly concrete jungle.

Youths and children are proactively coming into the streets demanding urgent and concrete climate actions by political leaders and decision-makers. Unfortunately, very little has been achieved toward both developing effective policies and translating them into actions. In Nepal, the government has failed to effectively engage and address the voice of young people in the policy formulation process. The government body looking after climate change should encourage youth participation in policy dialogues and build their capacity for climate actions. No matter how uncomfortable it is, youths should be hopeful and keep speaking and spreading that climate change is already a crisis in Nepal and this crisis can only be solved through belligerent policies and concrete actions of cutting down greenhouse gas emissions while adapting to the observed climate change impacts, not by the general statements as such made in the new climate change policy of Nepal.

The author is a Program Coordinator at Youth Alliance for Environment, Kathmandu

Nepal to hold int'l debate on climate change by August

KATHMANDU, April 18: The government is preparing to host a dialogue on climate change issues by July as a part of... Read More...

Climate talks shift to nitty-gritty details of Paris accord

KATOWICE, Dec 4: Negotiators gathered for the U.N. climate talks in Poland are getting down to the nitty-gritty part of... Read More...