We are becoming spoilt for choice where eating out is concerned. With so many restaurants, offering different types of cuisines, in the capital, it’s becoming increasingly difficult to say no to greasy, spicy food. You might think that eating healthy while eating out isn’t possible. However, if you take the time to search, you will find some eateries that offer healthy, organic food. It will be a short list of places but you do have that option. And in this relatively short list of places that serve healthy meals, Everfresh by Nuwa Estate Coffee has firmly established itself as one of the most popular destinations in Kathmandu.

Everfresh Café was established in October 2017 by Amar Gurung, Appa Sherpa, and Namgyal Sherpa. It’s located within the premises of Le Sherpa Restaurant that is owned by Namgyal. Ever since he established Le Sherpa, Namgyal wanted to have a cafe within the restaurant premises and he and Appa had been working on launching the cafe for quite a while before Amar joined them.
The three of them know one another from their school years as they went to the same school in Darjeeling. Though they were in different grades, they got along really well. Initially Amar, who has just completed his architecture studies from an Australian university, was given the task of designing the cafe space by Namgyal and Appa. Gradually, he got more and more involved in the cafe activities and was offered to join the Everfresh team as one of the founders.

The full name of the cafe – Everfresh by Nuwa Estate Coffee – came about because Appa, who also owns Nuwa Estate Coffee, wanted Everfresh to be a flagship store for the business. The trio worked together and decided on every tiny detail about the cafe including the menu. Amar worked at a cafe in Melbourne for about two years while he was studying and mentions that he was the one who was very much involved in the making of their menu.

Amar claims that he was very impressed by the cafe culture in Australia and that he wanted to bring that back to Nepal. He reveals that something he does not compromise on at Everfresh is the quality of food being served to the customers, especially their coffees. He adds that their whole menu is also leaning heavily towards the healthier side and says, “I wouldn’t call it completely healthy but we are definitely conscious about what goes into the food. Also, most of the raw ingredients we use to prepare our food are from the farmer’s market at Le Sherpa.”

For Amar, the most challenging part about operating the cafe was educating the staff on everything. He says that, because Everfresh is a western influenced cafe, some products they use – like chia seeds, flax seeds, avocado – are not things that are commonly used while preparing Nepali foods. So, he mentions that familiarizing the staff and the chefs on all of these took quite some time. The three founders also wanted Everfresh to run like a cafe with a very laid back and informal feel. So, they trained the staff to treat customers as equals rather than put them on a pedestal and create an uncomfortable formal setting. Amar reveals that even this needed some time for the staff to get used to it. However, all the effort has come together quite beautifully and Everfresh is a place you will enjoy. 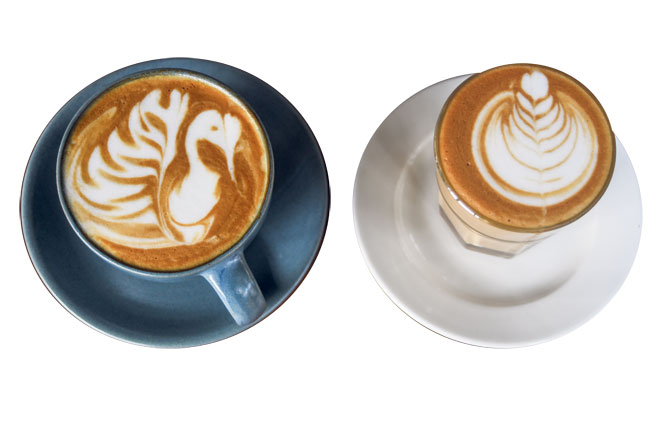 You shouldn’t miss out on the coffees at Everfresh. They are creamy, a little bitter, and taste spectacular. We liked the latte a tiny smidgen more than the cappuccino but that does not mean the cappuccino served here isn’t good. It’s really good to. It’s just that the latte is even better. The cherry on top are the experimental yet artistic and aesthetic foam art the baristas decorate the coffees with. 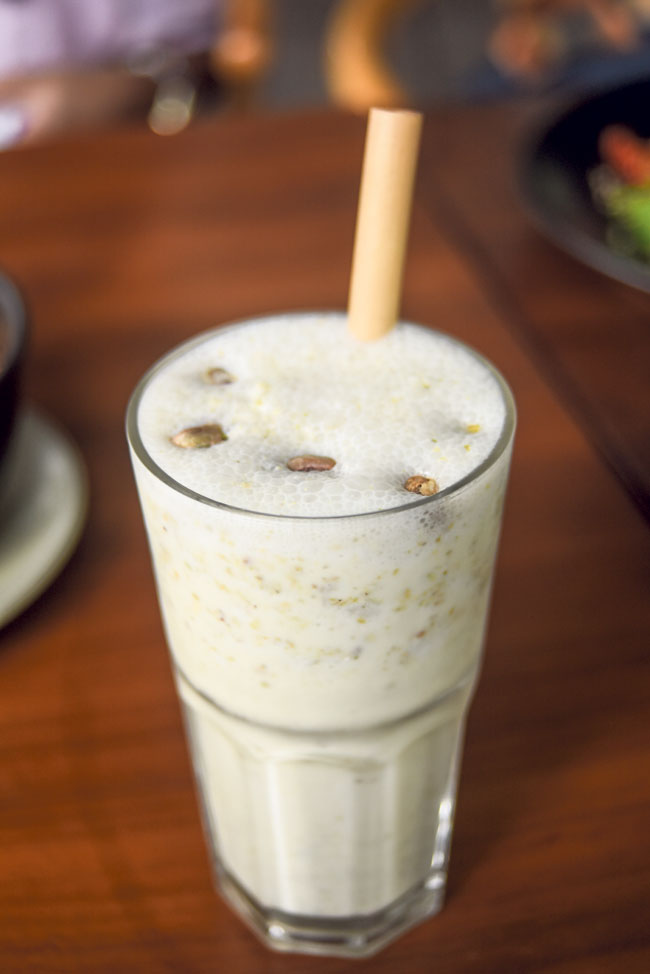 Like everything else served at Everfresh, this smoothie is as healthy as it gets. It’s made with yogurt, saffron, a bunch of other spices, and dried fruits. The only thing we did not like about the one we got served was that it tasted a bit sour and we are guessing it’s the yogurt that’s responsible for the assault on the taste buds. A sweeter yogurt could make this healthy drink taste a lot better than it is. 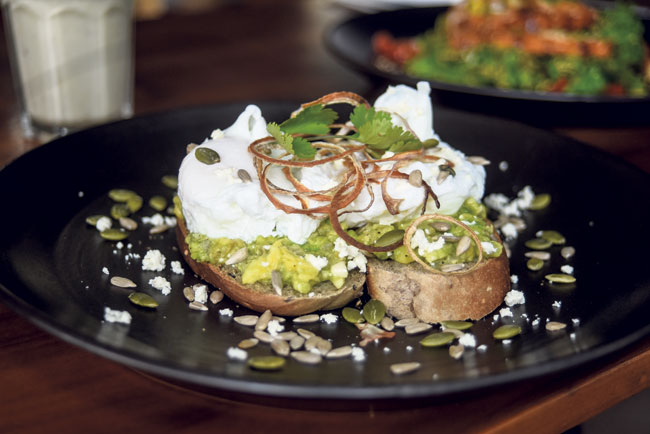 Amar mentions that this is the go-to breakfast item for a lot of Australians and one of his personal favorite breakfast foods too. The smashed avocado is actually on Everfresh’s menu because of his insistence. It’s healthy and is also something you might not find at any other eatery within the country. You might not like it if you are not a fan of half cooked eggs though because its smell might be a little too overpowering. 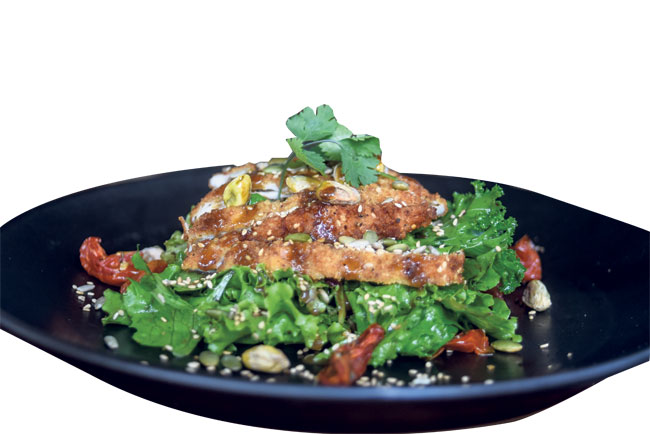 This dish is the definition of a salad done right. There are so many aspects where this dish could have gone wrong but fortunately the chefs make everything work. This crispy chicken salad has a lot of layers – the greens, the dried fruits, the beetroot relish, and caramelized onions and the crispy chicken. If you think all of these ingredients don’t go well together, you are in for a surprise, for together they make the salad simply delicious. The portion is slightly less and, if you are famished, this might not be that filling. 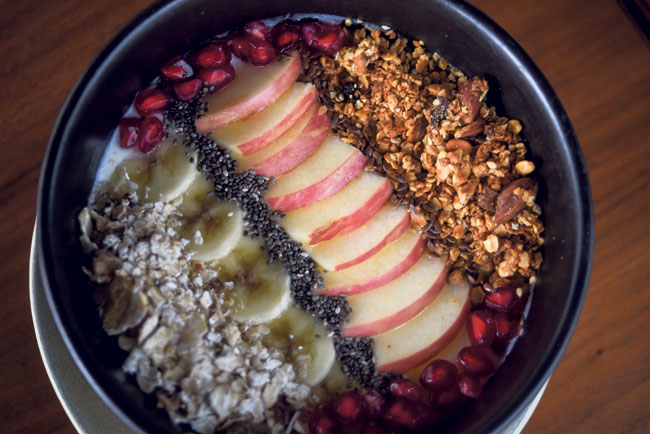 The yogurt bowl was, without a doubt, our favorite among everything we had at Everfesh cafe. The portion is more than enough for one and all the ingredients used to make this bowl have drastically different textures and that is what makes this dish such a delight. The crispiness of the granola, the gooeyness of the fresh fruits, the creaminess of the yogurt and the rough texture of the oats come together to make a really satisfying breakfast.

Not all urbanites have luxury of eating at homes because they have to work. They leave home early and stop... Read More...

World Health Day: 50 healthy food that can be part of your daily diet

On World Health Day, here are 50 healthy foods that can be part of your daily meal to help you... Read More...

KATHMANDU, Dec 20: We are becoming spoilt for choice where eating out is concerned. With so many restaurants, offering different... Read More...