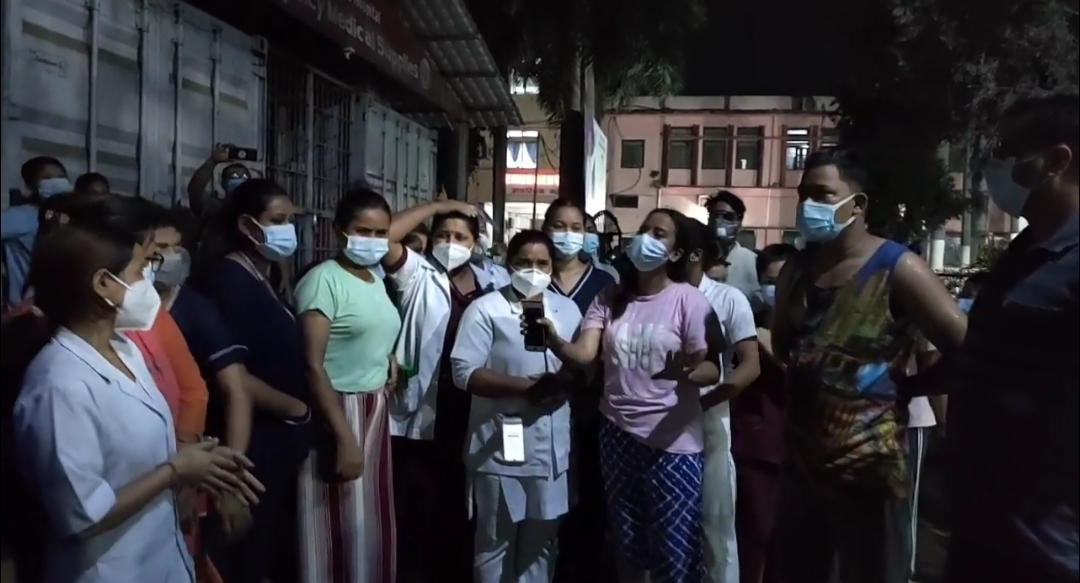 NEPALGUNJ, May 28: After a COVID-19 patient died while undergoing treatment, relatives of the deceased have tried to kill health workers at Bheri Hospital in Nepalgunj.

A doctor and a staff nurse on duty at the hospital's COVID ward were physically assaulted by the relatives of the deceased.

According to eyewitnesses, three nurses jumped from the roof to save their lives. Victims said that the attacker tried to kill the nurse and the doctor by strangling them. "We were examining the health conditions of all the patients. Dilli Bahadur died when we went to examine the health condition of one other patient in the ICU. We were chased by 6/7 people called by the deceased’s brother,” said a staff nurse on duty. “Some strangled us, some chased us. Even after we tried hiding in the duty room and toilets, they broke the door so we were forced to jump off the building.”

Health workers said the agitating relatives of the deceased made an attempt to kill them, completely ruining the working environment at the hospital. "We have been working day and night to provide medical care to sick people. But we have been attacked and were almost killed," a staff nurse shared her harrowing experience. “The attackers must be brought to book.”

The relatives of the deceased not only attacked the health workers but also vandalized the ICU room of the hospital. District Police Chief, SP Om Rana said that an investigation committee has been formed under the coordination of the Assistant Chief District Officer to investigate the incident. He said that the police had arrested three persons including Man Bahadur involved in the attack while others have absconded. "We have arrested three people involved in the attack. The health workers have demanded that the government take action as per the ordinance issued recently," he said.

Health workers are worried about the impunity as the attackers said they had the power of Lumbini Chief Minister Shanker Pokharel. Laxmi KC Oli, President of Nursing Association of Nepal, Banke Chapter, said the incident at Bheri Hospital was condemnable. "We are deeply saddened by the inhumane treatment shown to the health workers when they are working day and night," she said.

President KC also expressed doubts if the investigation committee would help provide justice to them. Krishna Prasad Shrestha, a member of Bheri Hospital Development Committee, said the incident in COVID Ward of the hospital was very sad and inhumane. Earlier, a health worker was beaten in the second week of May in the COVID ward of the same hospital.

KATHMANDU, May 28: My name is Asmini Gurung. I have been working at the COVID-19 ICU ward of Bheri Hospital... Read More...