Guardian of the abandoned dead 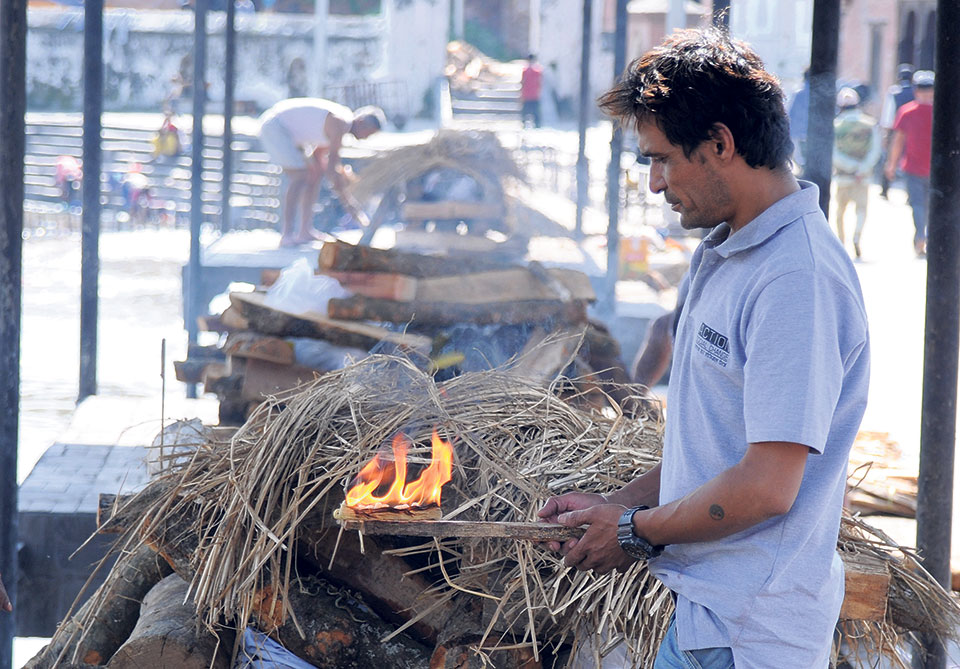 Just as the police officer and the doctor at the morgue in Patan hospital in Lalitpur sign the official documents and finish their jobs, Binaya Jung Basnet steps up. Standing before the unclaimed dead bodies, he begins his work. For a little more than four years, Basnet has been their guardian. Sometimes he is alone, other times he brings along a couple volunteers, usually his friends and their goal is simple: Give the abandoned dead bodies a funeral service with the dignity they deserve.

“Each time we come along to work, I surprise myself. I can’t believe I was able to do all that,” says Supradeepta Neupane, one of the friend/volunteer who has been helping Basnet for the past year.
Nepuane is referring to the conditions and the challenges they face while transporting the dead from the morgue to the Pashupati Aryaghat. The unclaimed dead bodies almost always have been in the morgue for more than 35 days which is the official number of days that the police legally wait for investigations as well as somebody to come forth and claim them.

He tries to describe the appalling smell and the decaying state of the body. “Sometimes the bodies are in horrifyingly awkward positions. Some have been there for so long that they are just bones with their skin peeling off. Our morgues don’t offer the best condition so it’s not unusual for them to be infected either,” he says.

Apparently some of the morgue guards too have been known to unlock the door and simply walk away disgusted. A television crew who once wanted to report their work stopped filming halfway, also disgusted. But Basnet and volunteers like Neupane carry on. Armed with surgical gloves and multiple surgical masks, they carry the bodies to a waiting truck that has been hired for their transportation. They do so very gently with much care so as not to dislodge the limbs (this apparently happened once).

“I didn’t think I could stomach it too,” continues Neupane, “but then you see Binaya swiftly working away, sometimes even without a mask. You realize this is important work. Somebody has to do it.”

When asked Basnet confirms that the state of the decaying dead bodies has never really bothered him. He seems more worried about how sad they appear in the morgue. As far as he is concerned, none of the departed souls could ever find peace there and he reveals, “Five years ago, that could have been my father as well.”

Many have clearly asked Basnet about his motives for choosing this particular area for social service. He has his answer ready and he isn’t afraid to divulge personal details. As somebody who had troubles with alcohol addiction, for several years, he was estranged from his family including his wife and daughter. Then his father went missing one day. This was obviously a real shock to his system.

“I remember seeing him at lunch on the day he disappeared,” recalls Basnet, “It took us three days to learn about his whereabouts. Turns out, he had been in an accident and we found him in a hospital morgue. He was labeled as one of the unclaimed before we found him.”

This was Basnet’s first visit to the morgue. At the time he saw that his father wasn’t the only unclaimed dead body. He says that even then he had wondered what would happen to the others.
Shortly after the tragic passing of his father, he says he bought in a very sick, homeless man he had seen near his home to Patan hospital. Though initially the treatment appeared to be working, the homeless man eventually died and Basnet found himself back in the morgue which was way more crowded than before.

Now this time, he says, he asked an official at the hospital about what happens to the likes of the homeless man, the unclaimed dead bodies. The answer he got at the time was, “They wait here.”
This was when Basnet decided to take matters into his own hand. He performed the last rites of the homeless man as well as inquired about the other unclaimed bodies. After several official procedures, he was allowed to perform the funeral of 13 others who had been stuck in the morgue.
Tritha Sar, director of Patan hospital explains, “The Metropolitan office, the police station as well as the hospital are involved in cases of deposing of the abandoned bodies. There are many official letters, documentation, and protocols that are required. Hospitals are only responsible for their storage. The police try and locate their relatives but in cases where we can’t find anyone, the metropolitan office has to take care of the funeral services.”

The procedure is a long one, informs Sar, and while the metropolitan office does eventually deal with it, they claim shortage in the office’s budget as well as manpower hinders their effectiveness. Sar adds that sometimes the hospital is indeed stuck with more dead and unclaimed bodies than they can accommodate in their morgue.

This is where Basnet has been of great help for the last couple of years. While before he had to initiate the inquiry and approach the hospital first, these days the hospital authorities call him for his assistance every three to four months. They are working on making this some sort of an official arrangement.

“People and communities don’t want to deal with these dead bodies. There is the fact that many find them to be disgusting as well as disturbing but it is also very easy to forget about them,” says Basnet. But the struggle of his own personal life and experience has given him the determination to continue with it.

Basnet has been working for radio for the last 19 years. While he spends a couple of days every week hosting shows talking about addiction and taking calls from listeners with personal problems on Radio Paryabaran and Annapurna, the rest of his time is spent working on this issue. He shares that he gets calls from the police as well as public for help almost every day. Basnet has even branched out to helping the needy with medical treatments because he insists the question we should all ask here is: Why are there unclaimed bodies in the first place?

He explains, “There are accidents and suicides and there are also those whose families, after paying the medical bills, can’t afford funerals and thus prefer to leave the bodies at the hospitals. But majority of the abandoned dead are already homeless. They die because they can’t afford treatments.”

His dedication with the cause has motivated friends like Neupane to join forces. They don’t only help him physically but have also assisted him by forming an organization. They call it Action for Social Change (AFSC). On its Facebook page, six of his friends who are volunteers and official members of AFSC have shared their contact numbers so that the public can easily get in touch with them in time of need.

Lal Bahadur Maharjan, an AFSC member who frequently contributes financially to the cause, says they are eager to make this operation more official. “A funeral service takes at least Rs10,000. We have been sponsoring all of it on our own so far but if we want to help more people we need more support,” he says

The Health Ministry as well as the metropolitan offices are said to have allocated budgets for the purpose of disposing unclaimed dead bodies. However, AFSC haven’t had much assistance from either of them. They claim that the officials continue to verbally express their support and state possibilities of collaborations in the future but to no fruition.

In the past, Basnet has even had to haggle with the metropolitan office authorities to bring in a truck to transport the dead bodies. Apparently, even in instances where he has been asked to bring in bills of the funeral services for reimbursement, they have had to sit down and meet many officials to get compensated. Basnet hopes these procedures will be simplified in the future but he doesn’t want to get stuck in the bureaucratic protocols.

“When Gagan Thapa was the health minister we were promised a meeting on several occasions but that didn’t happen until he was about to leave the post,” shares Basnet, “Now I don’t even bother with it. I don’t even know who is in the office at the moment.”

He explains that at least people at the Pashupati Aryaghat allow him to carry out the funerals even when he doesn’t have enough money. Since they have come to know him in the four years that he has appointed himself as the guardian of the abandoned dead, they believe when he says he will pay them later. And Basnet says that will do for now. He simply plans to continue this work without losing focus and momentum.

I woke up with a sense of panic. Being a single parent meant my kids would starve if I got... Read More...

KATHMANDU, July 17: A newborn baby girl was found in the toilet of Civil Hospital, Minbhawan in Kathmandu. ... Read More...