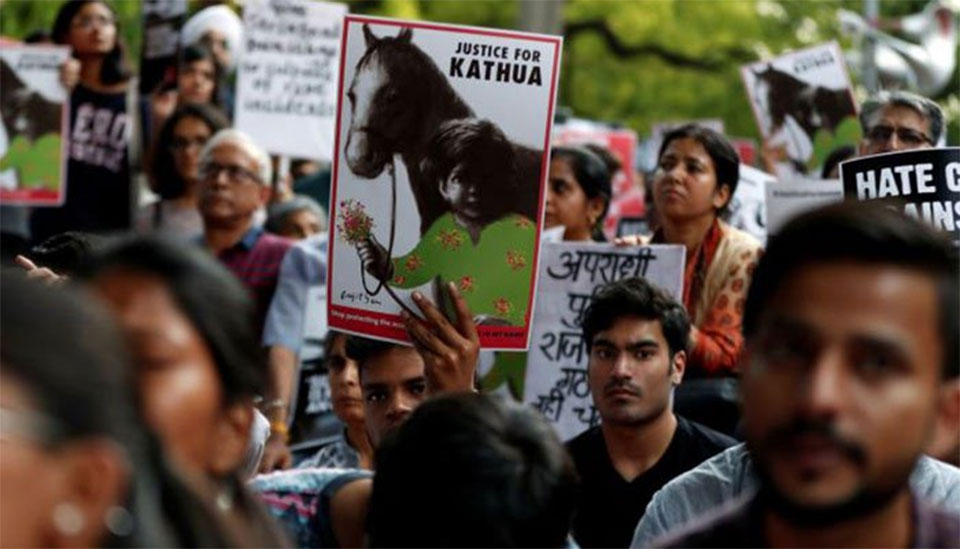 People attend a protest against the rape of an eight-year-old girl, in Kathua, near Jammu and a teenager in Unnao, Uttar Pradesh, in New Delhi, India April 15, 2018. Photo: Reuters

NEW DELHI, April 17: Eight men accused of raping and murdering an eight-year-old Kashmiri girl pleaded not guilty Monday to the horrific crime that has sparked revulsion and brought thousands to India´s streets in protest.

Four police and a Hindu temple custodian are among those accused of gang raping and killing a Muslim girl from a poor tribe in Indian occupied Kashmir where the highly-charged case has stoked long-simmering religious tensions.

The accused men appeared in court in the city of Kathua on Monday for the first time since being arrested in February for the girl's murder.

Ankur Sharma, a lawyer for the accused, said the men had pleaded not guilty were willing to take a lie-detector test. The court adjourned the case for procedural reasons, he added.

"The court has directed that chargesheet copies should be provided to all the accused. The next date of hearing is April 28," Sharma told reporters.

The girl was kidnapped, drugged and raped over five days at the Hindu temple in January before being strangled and bludgeoned with a rock.

The case ignited moral outrage and mass demonstrations across India after details of her gruesome death were made public by police last week.

The temple's custodian, retired public servant Sanji Ram, is accused of conspiring with four police officers, a friend, his son and a juvenile nephew to kill the girl and destroy crucial evidence.

Scenes of lawyers trying to stop police from entering court to file charges against the accused -- all Hindus -- evoked disgust and a warning from India's highest court against any attempts to obstruct justice.

The case has heightened fears of communal tensions in Indian occupied Kashmir.

The accused allegedly plotted the crime to drive the nomadic Muslim community from a part of Indian occupied Kashmir.

Muslim activists have condemned what they see as a crime against their community and some Hindu groups have argued that the accused had been unfairly charged.

On Monday, a lawyer representing the victim's family filed a petition in the Supreme Court, requesting the trial be relocated from Indian occupied Kashmir.

The lawyer, Deepika Singh Rajawat, said she had been receiving death threats for "daring to pursue the case".

Last week the Supreme Court ruled that the media must not reveal the girl's identity in their reporting of the case.

Two state ministers from Prime Minister Narendra Modi's Bharatiya Janata Party have resigned after attending a rally in defence of the accused.

The ruling party has also been accused of trying to shield one of its state lawmakers in Uttar Pradesh after a 17-year-old girl accused the powerful politician of raping her last year.

Kuldeep Singh Sengar was only arrested last week, despite the girl's family trying to file charges against him for nearly a year.

The two cases have stirred memories of the mass demonstrations that followed the gang rape and murder of a student in New Delhi in 2012.