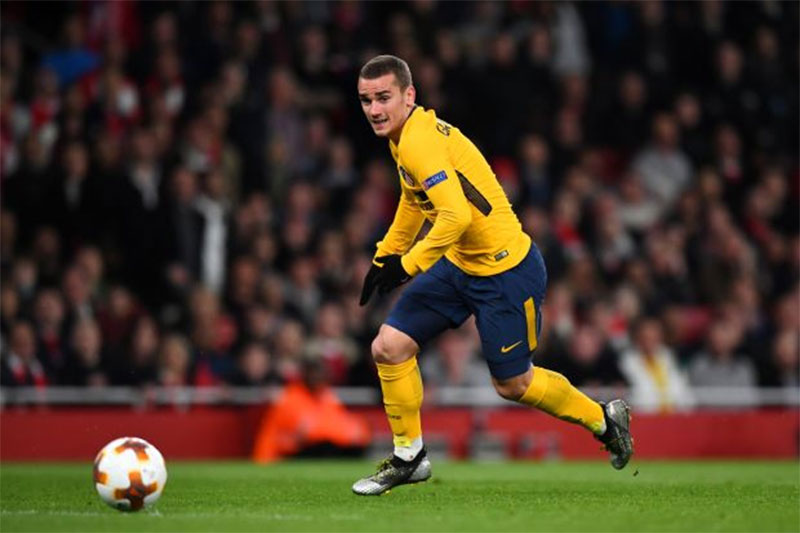 LONDON, April 27: A late equaliser from French striker Antoine Griezmann gave 10-man Atletico Madrid a precious away-goal advantage over Arsenal as the first leg of their Europa League semi-final at the Emirates ended 1-1 on Thursday.

Arsenal were given a huge boost after 10 minutes when Atletico defender Sime Vrsaljko was sent off for stamping on Alexandre Lacazette’s foot, and Atletico coach Diego Simeone was sent to the stands for his furious reaction to the decision.

The Premier League side dominated possession but missed a number of clear chances, with Atletico goalkeeper Jan Oblak making several fine saves before Lacazette broke the deadlock in the 61st minute.

The French forward headed Jack Wilshere’s cross down into the corner of the net to give manager Arsene Wenger hope of winning a trophy in his last season at the club and taking his last chance to get the team back into the Champions League.

Atletico seized back the initiative in the 82nd minute, however, when Griezmann sped past Arsenal defender Laurent Koscielny, collected his rebounded shot off keeper David Ospina and calmly lifted the ball into the roof of the net.

“We come out tonight with a bitter taste,” Wenger told reporters after the penultimate home game of his 22-year reign at Arsenal.

“You have to stay 1-0 up and after that everything is open,” the Frenchman added. “We created the anticlimax by giving away the goal.”

Wilshere also rued the missed chances for Arsenal, who are playing in their first European semi-final in nine years. Atletico have reached the Champions League final twice in the last four years and won the Europa League in 2010 and 2012.

“It’s definitely not the result we wanted, but the performance was good so we have to take confidence from that and take that to the away leg. If we create chances then we’ve got to put them away,” Wilshere said.

The teams head to Madrid for the second leg next week when Atletico, second in Spain’s La Liga, should be able to recall talismanic striker Diego Costa who scored three times against Arsenal in six games while he was at Chelsea.

Simeone praised the courage of his players.

“They are basically heroes,” the Argentine said. “They stood firm for eighty-something minutes.

“The team responded to the red card with some fantastic defensive work and I think that will go down in the history of Atletico Madrid.”