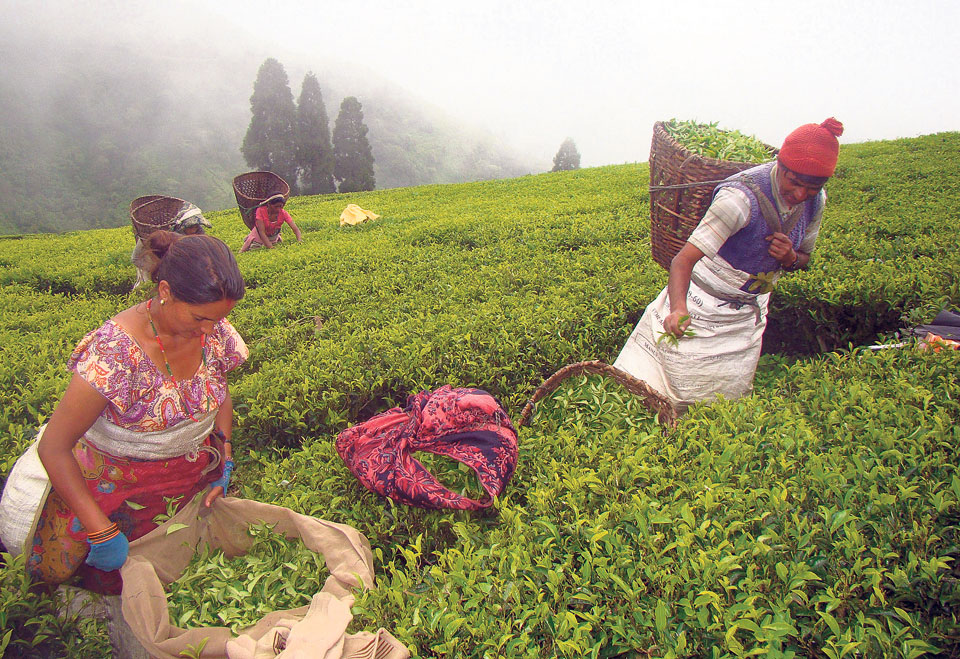 ILAM, June 23: Production of green tea leaves has declined significantly in eastern hilly districts including Panchthar, Jhapa and Ilam – the capital of tea production in Nepal.

Late monsoon, fog and heavy rainfall were the major factors that affect tea production this year, according to farmers. Although the production was satisfactory on the first flush, it fell by more than half in the second flush, say farmers.

Kamal Mainali, a promoter of Himalayan Shangri-La Tea Producers, said that his plant is not running up to the capacity due to lack of green leaves. “We don’t know the exact reason. But production has declined by more than half this year,” Mainali said, adding: “Unpredictable climate has affected tea production.”

Sanam Rai, a tea farmer from Suryodaya Municipality, said production this year has fallen by more than half compared to last year. “We don’t know why the production is decreasing drastically,” Rai said, adding that farmers like him will have to face huge loss this year.

According to Central Tea Cooperative Federation (CTCF), production of green leaves has fallen all over the country. Govinda Dahal, president of CTCF, said that tea production by his plant, Greenhill Cooperative Tea Processing Industry, has also dropped significantly.

Around 30,000 commercial tea farmers of 100 cooperatives from Ilam, Panchthar, Dhankuta, Terathum and Jhapa districts are under the umbrella of CTCF.

“Unfavorable climate has affected tea production all over the country this year,” he said, adding that farmers in Ilam have suffered the most.

Ilam Tea Producers Pvt Ltd of Suryodaya Municipality used to process 18,000 kilograms green leaves per day in the past years. This year, it is processing only 7,000 – 9,000 kilograms per day.

The situation is the same in Ilam Tea Processing Industry located of Shree Antu. Last year, the industry had processed daily 11,000 kilograms of green leaves at this time. This year, it is process only 6,000 kilograms every day.

Farmers say that heavy rainfall during winter and fog in rainy season has affected green leaves production this year.

KATHMANDU, July 21: The government has reduced brokerage commission for trading of share and securities in the stock market. ... Read More...

Almost half the world will be online by end of 2016: Report

By the end of 2016, almost half of the world’s population will be using the internet as mobile networks grow... Read More...