Govt yet to decide prize money to medal-winning players 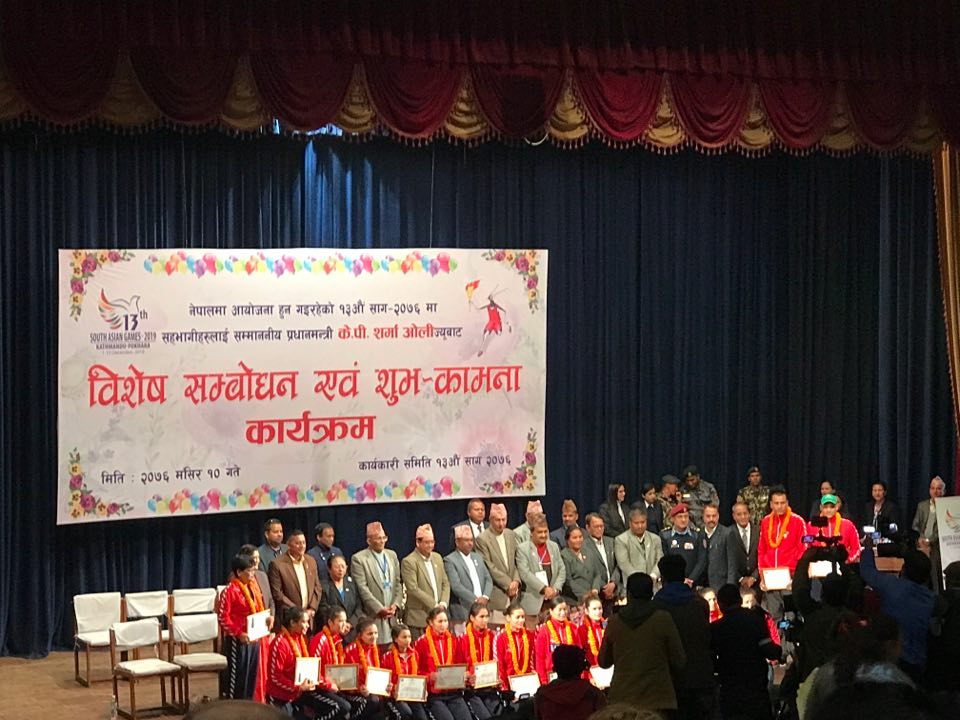 KATHMANDU, Nov 26: The government has yet to decide on the prize money to be given to the medal-winners in the upcoming 13th South Asian Games to be held in Kathmandu, Pokhara and Janakpur from December 1 to 10.

Prime Minister KP Sharma Oli was scheduled to address the Special Addressing and Wishing Program to the players representing Nepal for the 13th SAG, however, he could not make it today as he was admitted to hospital following his health complication.

Finance Minister addressed the function in the absence of the prime minister. Addressing the program, Minister Khatiwada said that the government is planning to introduce sports-oriented policies in line with the new federal structure. He further said that games and sports play an important role in strengthening national unity.

On the occasion, Minister Khatiwada vowed to construct a well-equipped volleyball covered hall in the country. He instructed the concerned authorities to arrange the land for the same. “SAG is the Olympics of south Asia which is sure to contribute for economic prosperity through sports tourism,” said he.

He said that the medal-winners will be given an attractive cash prize and award once the Cabinet makes the decision.

Prime Minister Oli will announce the prize to be given to the achievers in the SAG, according to Khatiwada.

Also speaking at the program, Minister for Youths and Sports Jagat Bishwakarma said that the preparation for the mega event is almost over. According to him, Nepal has become successful in organizing such mega events despite having required infrastructures.

On the occasion, Nepal’s women volleyball team was rewarded for their success in the Asian Volleyball Confederation (AVC) Asian Senior Women Central Zone Volleyball Championship. Nepal national women volleyball team has claimed the maiden international title on November 14 defeating the Maldives in the finals. Earlier, the government had declared to confer 300 thousand each after their feat.

KATHMANDU, Aug 4: A sub-committee has been formed under the parliamentary committee of Education and Health to monitor the upcoming... Read More...

KATHMANDU, Jan 21: The 13th South Asian Games is likely to reschedule by six months as the Organising Secretariat has... Read More...

KMC to implement 'One Ward, One Model School' program
15 hours ago