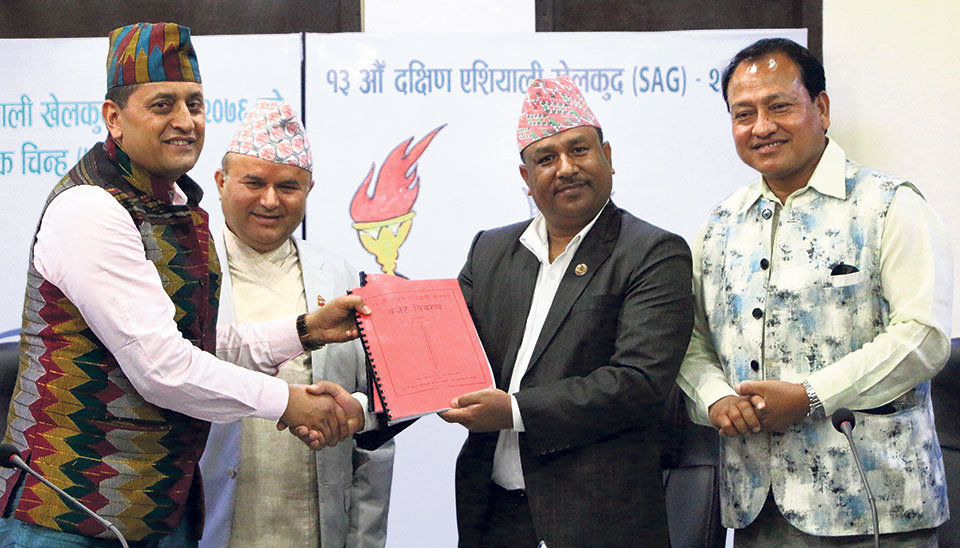 KATHMANDU, June 17: Budget formulation taskforce has demanded an ambitious budget to organize the 13th South Asian Games (SAG), which is scheduled to be held in December this year.

At an event organized at the Ministry of Youth and Sports in Singha Durbar on Sunday, the taskforce demanded Rs 5.265 billion under 16 different topics for the SAG.

However, the National Sports Council (NSC) had earlier said that around Rs 3 billion would be enough to organize the games.

The taskforce led by NSC Vice-President Pitambar Timsina handed over the budget estimate to the Minister for Youth and Sports Jagat Bahadur Bishwakarma on Sunday.

Now, the Sports Ministry will make final estimate of the size of the budget and request the Ministry of Finance to release the budget for the tournament, which is scheduled to be held from December 1 to 10.

Only after the Ministry of Finance approves the request of the Sports Ministry for the organization of the 13th SAG, the working procedures of the 16 committees for the mega sporting event will get full shape.

Taskforce coordinator Timsina said they finalized the budget estimate for the SAG after holding several talks with experts. He accepted that the estimated budget was ambitious, and claimed that its size grew after they included technical trainings and coaching sessions for the preparations. He also added that a comfortable size of budget would help the preparations of the tournament to be smooth and effective.

Minister Bishwakarma appealed to all stakeholders to assist them in organizing the tournament successfully as the SAG was a matter of pride for the country. He further added that this budget was only an estimate and was subject to approval from the Ministry of Finance. He explained that prompt approval and release of budget was important to start the preparations of the
SAG.

The committee, which had held talks about the budget on May 9 for smooth functioning and preparations of the 13th SAG, had formed the taskforce under the leadership of NSC Vice-President Timsina.

KATHMANDU, May 10: A total of 625 athletes will be participating in the 13th South Asian Games (SAG) from Nepal. Read More...