Rescuers from the Nepal Army digging the snow in search of missing South Korean trekkers and their Nepali guides along the Annapurna circuit at ward 11 of Annapurna Rural Municipality in Kaski district on Wednesday. Four South Korean trekkers and three Nepali guides are missing in the area after an avalanche on Friday. Rescuers on Wednesday evening said they have detected the possible location where the missing trekkers might have been buried. Photo Courtesy: Nepal Army

KATHMANDU, Jan 23: The government has suspended search and rescue operation for four South Korean trekkers and three Nepali guides who have gone missing following an avalanche in Annapurna region since Monday.

In a press release, Ministry of Culture, Tourism, Civil Aviation on Thursday said that the ongoing search and rescue operation for the missing trekkers has now been halted due to bad weather condition, the safety concerns of rescuing team and incessant snowslides in the avalanche-hit Deurali area of Annapurna rural municipality in Kaski. 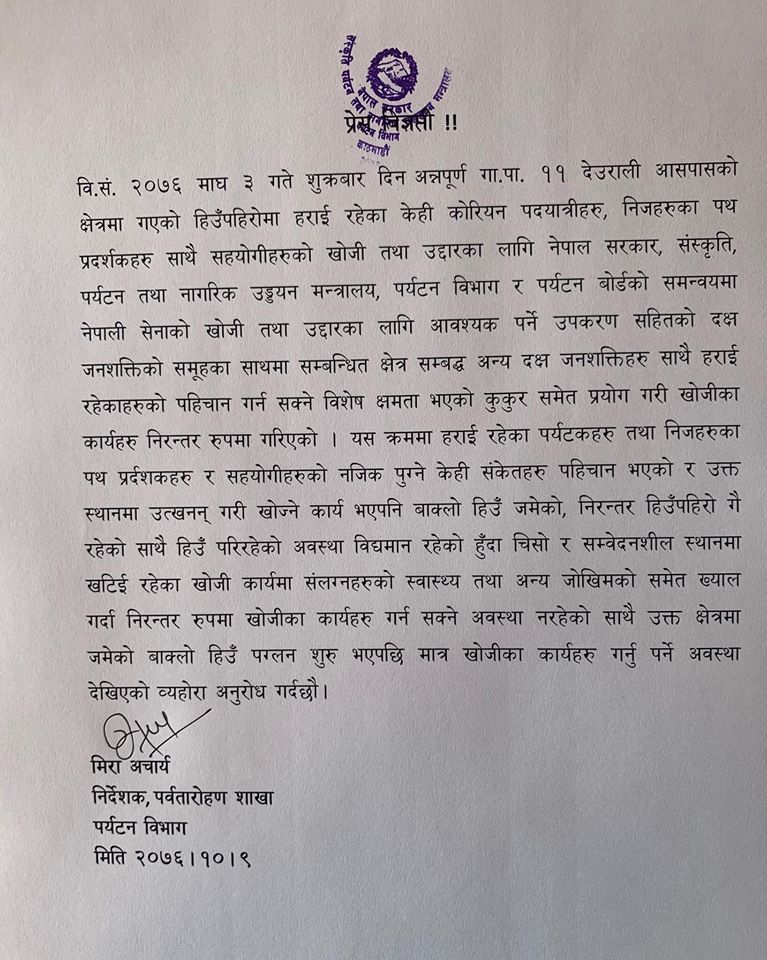 A team of Nepali Army and famed rescuers were deployed with hi-tech equipments and helicopters on search operation since Monday.

With the rescue team remaining clueless about missing people, the government decided to suspend the ongoing operation today, authorities said.

A nine-member team led by Colonel Amit Gurung had traced the bodies of the missing in a deep gorge covered by hardened snow, and the team had made last-ditch effort today.

A massive avalanche hit the Deurali area of Annapurna rural municipality-11 in Kaski district on Friday, leaving four South Korean nationals and three Nepalis missing. Following the avalanche, at least 130 trekkers and Nepali guides were evacuated from the area.

The government and tourism entrepreneurs tried to carry out a search operation. But due to the bad weather, rescue choppers failed to land in the avalanche area. An army helicopter finally had landed there on Tuesday after several attempts.

On Tuesday, the government had sent a helicopter equipped with a high-tech device to the avalanche-hit area and it traced the possible location of trekkers who are missing following the avalanche last week.

Apart from army personnel, Sherpas, Korean rescuers and family members of the missing Nepali guides were also in the area for the search.

KATHMANDU, Jan 23: Though the Nepal Army has started searching for the trekkers missing in the avalanche-hit area of Annapurna... Read More...

Kathmandu, Jan 22: The government on Tuesday morning sent a helicopter equipped with a high-tech device to the Annapurna Base... Read More...

KATHMANDU, Jan 21: A well-equipped team sent by the government to rescue the missing trekkers near the Annapurna Base Camp... Read More...