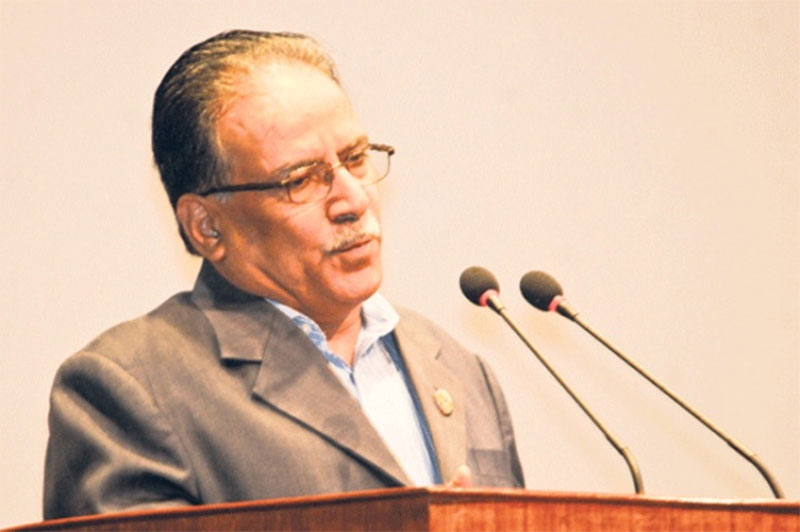 KATHMANDU, July 11:  The CPN (Maoist Center) that has been calling for a national unity government, has entrusted Chairman Pushpa Kamal Dahal to garner national consensus to this effect on Monday.

A meeting held in Lazimpat today has assigned party Chairman Daha to build consensus among the political parties to form a national unity government saying that the ruling CPN-UML did not act in line with the nine-point-pact and gentleman agreement reached on May 5,  leader Mani Thapa told Republica Online.

The meeting has also accused the ruling UML of running the government unilaterally and imposing totalitarianism in the name of nationalism.

According to Thapa, the meeting decided to make a last ditch effort to pile pressure on the government to  implement the nine-point-pact and gentleman agreement. In case the effort failed, the CPN (Maoist Center) would seek an option to the incumbent government, added Thapa.

The meeting has concluded that the ruling UML-led government has been a stumbling block to execute the remaining task of the peace process.

Meanwhile, the Maoist leaders have accused the legal practitioners loyal to CPN-UML of trying to trap them by reviving the insurgency cases.

The meeting has also lashed out at the government saying that the UML-brought budget is more of an election-oriented rather than development-orientated.  It has also accused the government of inducting an inefficient official as the Chief of the National Reconstruction Authority (NRA) and misusing fund by doling it out to the NGOs loyal to the UML.

Likewise, Maoist Center leader Nayan Kaji Shrestha said a national unity government is necessary even to implement the nine-point-pact. The meeting has assigned our Chairman Dahal to hold talks with UML Chairman KP Sharma Oli to this effect, said Shrestha.

On Sunday, the leaders in a meeting had agreed to give continuity to the present ruling alliance ironing out the differences existing among the parties.

Criticizing the Maoist bid to seek a national unity government, UML Secretary Pradip Gyawali said, “The CPN (Maoist Center) is not honest toward the nine-point-pact as it started seeking an alternate government immediately after the pact.”

He added that a group within the Maoist Center is power-hungry and wants to form a new government by toppling the incumbent government.

KATHMANDU, Aug 9: The CPN (Maoist Center) has given the responsibility of selecting ministers to represent the party in the... Read More...