Govt pulls back Kanchanpur CDO in view of  ongoing protest 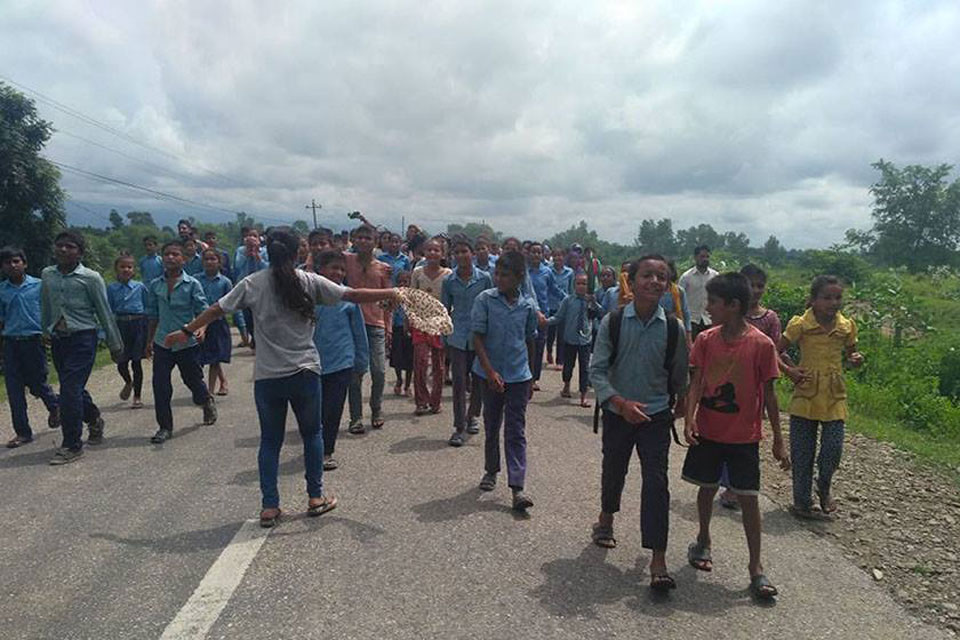 KATHMANDU, Aug 23: The Ministry of Home Affairs has pulled back Chief District Officer of Kanchanpur district Kumar Bahadur Khadka after eight people including two police officials were injured in a clash with police in the course of protest against Nirmala rape and murder case on Thursday.

A meeting of the Home Ministry held today took a decision to this effect following the clashes between the security personnel and the demonstrators in Kanchanpur district.

The government has appointed Taranath Adhikari, official at the Home Ministry, to the post as CDO of Kanchanpur district after former district head Khadka was pulled back.

At least eight people including two police officials were injured after police opened fire on protesters while they were staging demonstration demanding arrest of the culprit involved in the rape and murder case of Nirmala Panta on Thursday.

Those injured are Arjun Bhandari, 17, of Bhimdatta Municipality-18. According to police, Bhandari has received a bullet in his left leg. He has been  taken to Seti Zonal hospital after preliminary treatment at Mahakali Zonal hospital.

Kanchapur locals have been demonstrating for the last three days demanding arrest of the culprit involved in the raping and killing of Nirmala Panta, a 13-year-old girl of Bhimdatta municipality-2, Kanchanpur.

Kanchanpur Police arrested 41-year-old Dilip Singh Bista, a local of Bhimdatta Municipality-19, in connection with the Nirmala rape case after 24 days of the incident.

Nonetheless, locals do not believe Bista’s involvement in the case as he is mentally retarded and have accused the police administration of arresting him to simply dispel the agitation of the protesters.

Market places in Mahendranagar, Suda, Lalpur, Daiji, Champhapur, Sisaiya, Bhansi, schools and factories and transportation have remained closed due to the strike.

Demonstrators have been burning tyres in the major thoroughfares of the town while students from various schools too have been taking part in the demonstrations.

Security personnel have been mobilized in large numbers in protesting areas to avert the untoward incidents, according to the District Police Office, Kanchanpur.

A team led by SSP Chand has been formed and mandated to look into the murder case of Panta.

A 13-year-old Nirmala Panta had been ruthlessly raped and killed while she was returning home from her friend's house at Bhimdatta municipality-2, Kanchanpur on July 26.

Nirmala's body was found dumped in a sugarcane field the following day.

DADELDHURA, Aug 22: Locals on Wednesday took to the streets demanding stringent action against the murderer of Nirmala Panta at... Read More...

CDOs could not be subordinated to Provincial Govt: Minister Basnet

SURKHET, Dec 26: Minister for Forest and Environment Shakti Basnet has stated that the Chief District Officers (CDO) could not... Read More...

Updated: 8 hurt as police open fire on protesters in Kanchanpur
3 years ago