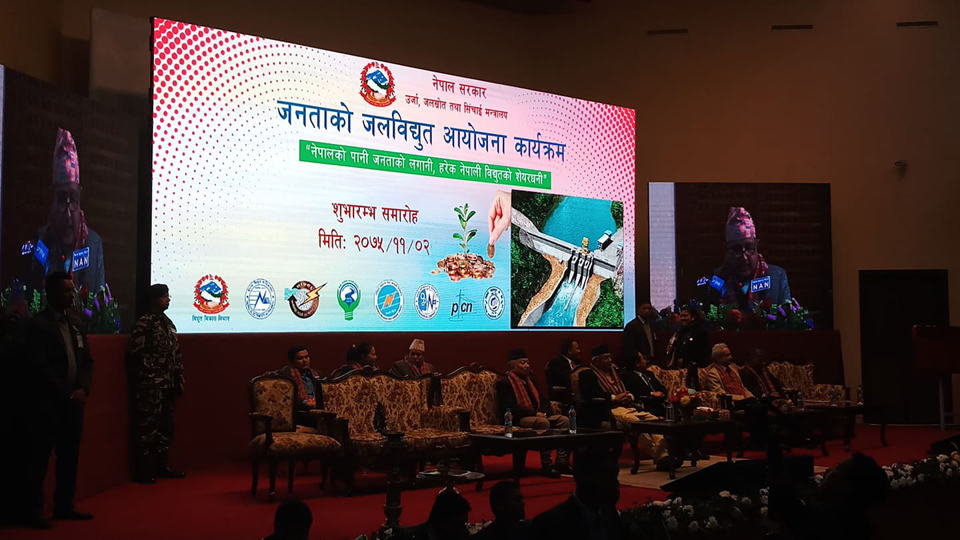 KATHMANDU, Feb 14: The government has launched a program to mobilize funds of general public for hydropower development.

Prime Minister KP Sharma Oli inaugurated the program amid a function at City Hall in Kathmandu on Thursday, coinciding with the first anniversary of the formation of the government.

The program has been launched at a time when the government has failed to expedite hydropower projects like Upper Tamakoshi, Kulekhani III and Budhigandaki, among others, being implemented by its entities.

Earlier, organizing a press conference on Wednesday, Minister for Energy, Water Resources and Irrigation, Barshaman Pun, had informed that the government had made all necessary arrangements, including formulation of laws and preparation of program document, to start the program. “This is an attempt to mobilize scattered resources of the general people in hydropower projects for people’s socio-economic transformation,” he added.

Different government entities, including Nepal Electricity Authority and Hydroelectricity Investment Development Company Ltd, will implement the project. They will encourage people to invest in such projects, according to the ministry.

The government has unveiled plan to build 19 projects, including Tamakoshi-5 (96 MW), Upper Arun (725 MW), Trishuli 3B (37 MW)) and Bheri Babai (48 MW), by mobilizing resources from general people. The energy ministry had floated the program in its white paper for the electricity sector issue earlier.

“This program makes a big shift in hydropower investment sector of Nepal. Now, we are becoming capable enough to invest even in big hydropower projects. Earlier, we had to look at foreign investors for the same,” Pun said in the press meet.

Financial need to implement all 19 projects will be in tune of Rs 600 billion, according to the ministry. However, the ministry has not categorically specified how people will be able to invest in those projects.