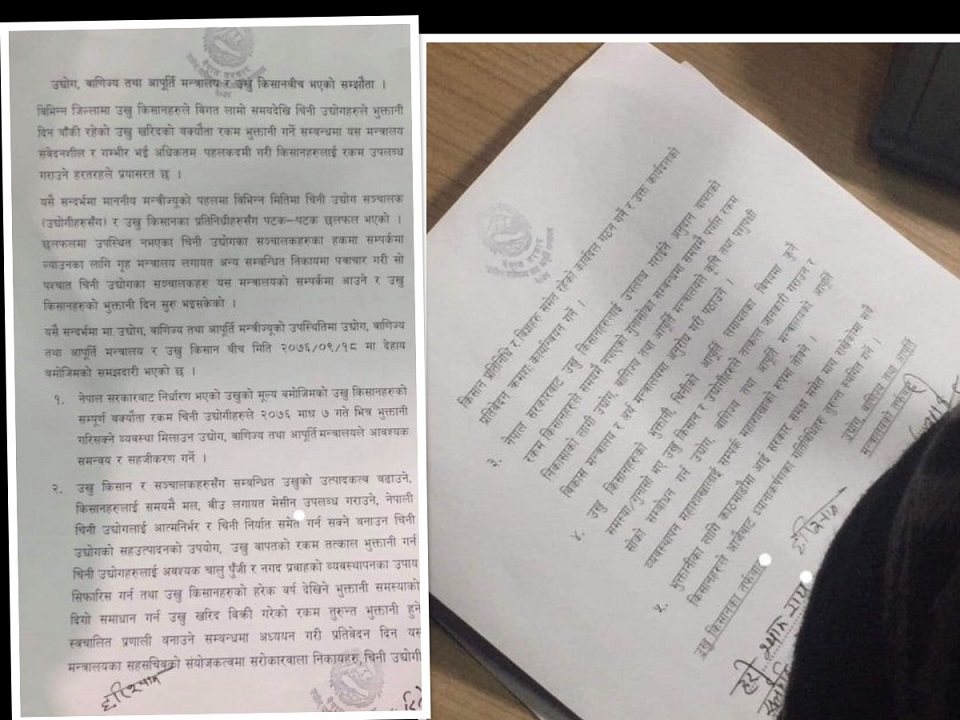 KATHMANDU, Jan 4: The agitating sugarcane farmers have called off their protest following a five-point agreement with the government Friday.

In the agreement, the Ministry of Industry, Commerce and Supplies (MoICS) has pledged to the agitating farmers that it would make the sugar mills clear all dues to the farmers by January 21.

The agreement signed by Hari Shyam Raya on behalf of the agitating farmers, and Dinesh Bhattarai, joint secretary of the MoICS also states that the government will form a task force led by a joint secretary of the ministry to recommend ways to resolve recurring problems of sugarcane farmers and write to the Ministry of Agriculture and Livestock Development and the Ministry of Finance to provide adequate subsidy money on time.

Instead, the last point of the agreement states: “Farmers will immediately halt all activities that they have been carrying out to draw the attention of the government by coming to Kathmandu.”

Sugarcane farmers said the mills are yet to clear outstanding payments for the past five years totaling Rs 1.33 billion. According to them, it is mainly six sugar mills that have been refusing to clear the dues.

Meanwhile, the owner of Annapurna Sugar Mills, Rakesh Agrawal, has informed the MoICS that a total of Rs 5 million due has been paid to the sugarcane farmers on Thursday and Friday, and the remaining dues will be cleared gradually, according to Bhattarai.

The agitation launched by the farmers a week ago was gaining broader public support with a number of rights organizations and activists showing solidarity with the sit-in protest at Maitighar Mandala in the capital.

The agitating farmers continued their sit-in protest on Friday braving rain and cold. The police even tried to disperse the protesters and douse the fire that they had lit to stave off the cold.

BUTWAL, Dec 5: Anita Chaudhary of Pratappur Rural Municipality in Nawalparasi has been planting sugarcane on one bigha of land... Read More...