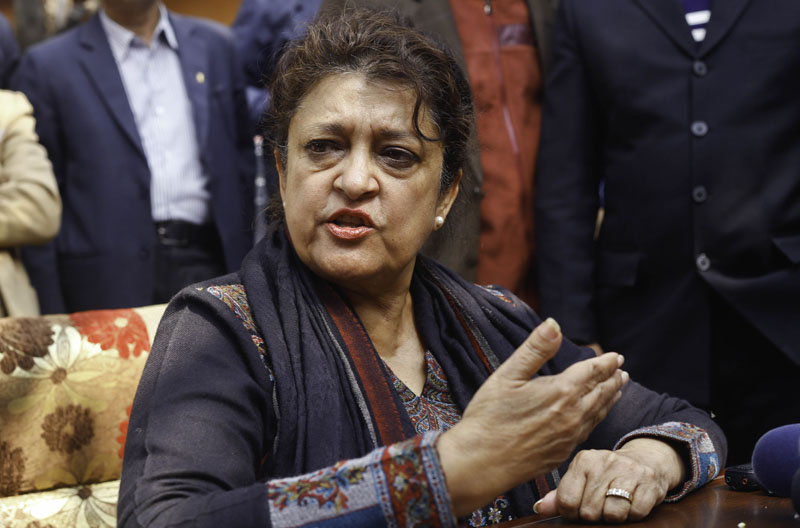 KATHMANDU, Nov 14: Violating Parliamentary Finance Committee's strict directive against providing more than Rs 1.5 million for medical treatment of VVIPs and VIPs, the government has decided bear up to Rs 5 million in medical expenses of former Deputy Prime Minister and central leader of Nepali Congress (NC) Sujata Koirala, who is suffering from breast cancer.

A cabinet meeting held at Singha Durbar on Sunday has decided to bear up to Rs 5 million in medical expenses for Koirala, admitted a minister, who did not want to be named fearing widespread criticism from the public.

People from various quarters had sharply criticized Koirala after it was reported that she sought Rs 10 million from the government for her treatment. Following the cabinet decision, social media have been flooded with criticism over the decision.

Although the cabinet decided to bear the medical expenses of Koirala, ministers have declined to officially comment on the decision. When Minister for Information and Communication Surendra Kumar Karki was asked about the decision during the press briefing after the cabinet meeting, he said he was unaware of the decision. “The issue was not discussed at the meeting,” he told reporters.

However, several ministers confirmed that the cabinet has decided to bear medical expenses up to Rs 5 million of Koirala.

After the government provided money to VIPs and VVIPs in the name of covering their medical expenses taking benefit of the loopholes in the “Working Procedures Related to Citizens Relief, Compensation and Financial Support, 2071”, the parliamentary panel had strictly directed the government to amend the procedure.

On September 15, a meeting of the panel had asked the government to amend the procedures to remove the loopholes and not pay more than Rs 1.5 million for the treatment of VIPs or VVIPs.

Following the panel's instruction, the Ministry of Health had even forwarded the amended draft of the procedure to the cabinet for endorsement. The draft was expected to be endorsed by the cabinet at Sunday's meeting. But the cabinet meeting did not endorse the procedure as endorsing it would have barred the government from making the decision in Koirala's favor.

After Health Minister Gagan Thapa strongly objected against covering medical expenses beyond Rs 1.5 million, the maximum ceiling, as stated in the procedure, Deputy Prime Minister and Home Minister Bimalendra Nidhi took the proposal to the cabinet for endorsement.

Thapa was not present during Sunday's cabinet meeting.

Meanwhile, the cabinet has decided to allocate 111,685 US dollars to reinstate the office of the United Nations Regional Centre for Peace and Disarmament in Asia and the Pacific, which was displaced after the devastating earthquakes last year.

KATHMANDU, Jan 20: Putting aside the earlier proposal to provide compensation to the landowners whose lands were acquired by the government... Read More...

KATHMANDU, Aug 29: It has come to light that the government had decided to provide Rs six million for the... Read More...

With clean-feed coming into force, foreign TV channels are ad-free; some 150 channels’ broadcast suspended
1 minute ago

Don't give up on COVID-19 plasma, experts say, after study finds no benefit
19 hours ago

Explainer: What happens if the U.S. election is contested?
20 hours ago

21 deaths from COVID-19 in Sudurpaschim Province
2 hours ago