Govt cracks down on protestors at Maitighar 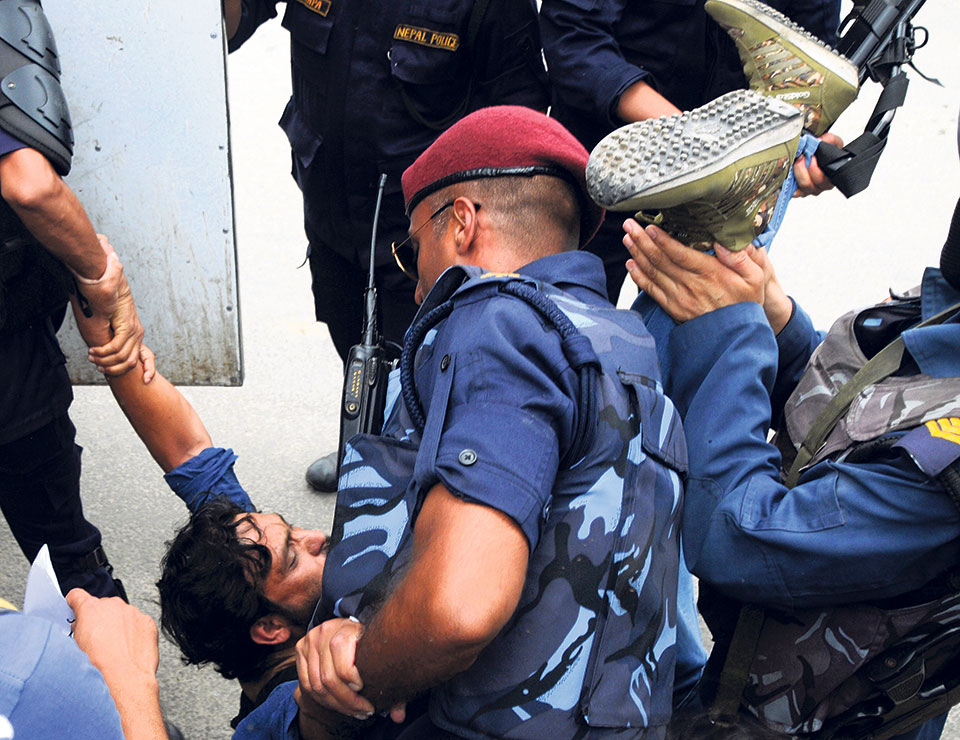 Police arrest cadres of Bibeksheel Sajha Party from Maitighar Mandala in Kathmandu on Saturday for staging protest in the prohibited zone. Keshab Thoker/Republica

On Saturday afternoon, dozens of individuals including the activists of Bibeksheel Sajha Party reached Maitighar Mandala to stage a protest against the government’s recent decision to declare Maitighar Mandala as a ‘no protest zone’ and also express solidarity with Dr Govinda KC, who started his fast-unto-death from the same day in Jumla putting forth several demands.

As the demonstrators started their ‘peaceful demonstration’, police asked them to vacate the area. After they continued with their demonstration, police intervened and arrested nine members of Bibeksheel Sajha Party including its coordinator Ujjawal Thapa from the venue. Among others arrested were the party’s central committee member Sashi Bikram Karki and Surendra Bhandari, according to Milan Pandey, a central committee member of the party.

The arrested were detained at Metropolitan Police Circle Singha Durbar for several hours only to be released later.

As per the instruction from the Ministry of Home Affairs, the District Administrative Office, Kathmandu imposed a ban on organizing demonstrations or gatherings at Maitighar Mandala from April 29. Similarly, the government also maintained that public functions, demonstrations or any kind of protests will be allowed in no places other than the designated seven places namely Tundikhel Khula Manch, Tinkune ground near Koteshwar, Bhuikhel Chaur at Bhagawanpaau, sports ground at Pepsicola, Sano Gaucharan football ground, the open space in front of Social Welfare Council, Lainchaur and Sifal Chaur of Gaushala. The district authority had warned of action if anyone violates the ban.

The decision was met with widespread criticism from various quarters, with many terming it as an assault on democracy and the general public’s right to demonstrate peacefully. The authorities had refrained from any action even if some groups organized public gathering or demonstrations at Maitighar Mandala until now.

Bibeksheel Sajha Party has criticized the government for arresting its party carders for organizing “peaceful protests.”

“By designating certain places for protest and imposing a ban at Maitighar, the government is trying to give a message that it won’t tolerate any protests against it. It is a sign of anarchy and an attack on democracy, people’s right to protests,” Milan Pandey of the party said.

He said that the arrest won’t deter his party from staging protests against the government’s ill-intended decisions or activities in the future.

KATHMANDU, Sept 8: Traders have shut down their businesses in Durbar Marg for an ‘indefinite period’ to protest the government’s raid... Read More...

One killed, three injured in wild boar attack
48 minutes ago