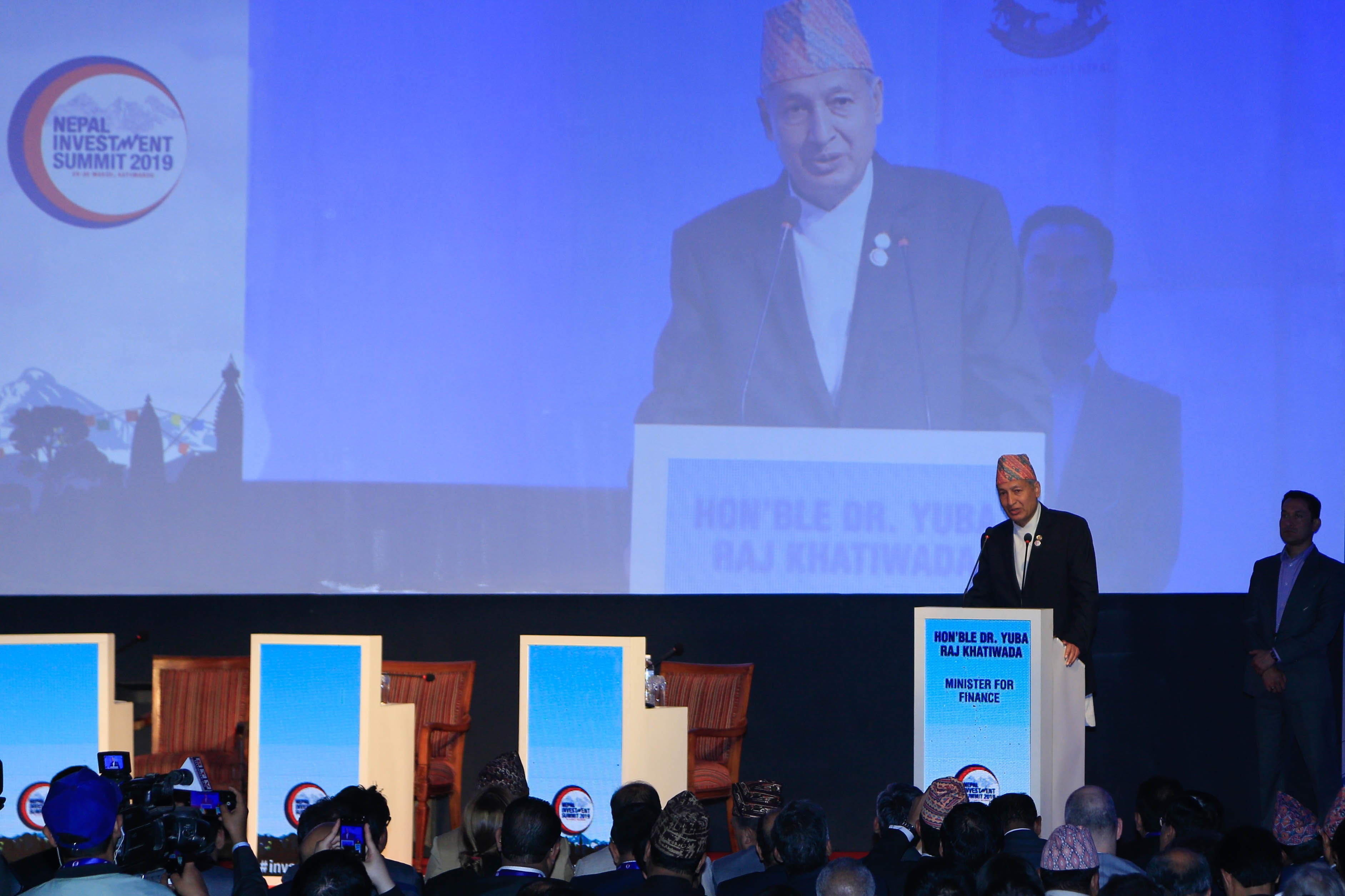 FM terms the summit a beginning of the journey

'Destination to expand business and best rate of return on investment'

KATHMANDU, March 31: With the successful organization of the two-day investment summit, the government has said that the real journey to work with foreign investors has now started.

Delivering his concluding remarks of the summit, Minister for Finance Yuba Raj Khatiwada said that the government's collaboration with investors will continue in the days to come. He also expressed hope that the investors' participation at the summit will culminate into increased investment in Nepal in near future, adding that the journey has now began.

Minister Khatiwada also said: "We have begun our journey toward prosperity hand-in-hand with the private sector. While we recognize the private sector as the engine for growth, this summit is an indication of our common bond to proceed together towards that end."

Minister Khatiwada, as the coordinator of the summit, also assured that Nepal had the best sectors for investment, the best people to collaborate with, the best destination to expand investor's business, and the best rate of returns on FDI.

The Finance Minister promised healthy and competitive environment, and a level-playing field for investors. In addition to few reforms and policies taken recently, the government has also vowed of continued reforms including beginning of the one stop services to investors to end hassle free services to investors at the earliest and also policy stability for the investors among others.

Speaking at the wrap-up session of the summit's outcome, CEO of Investment Board Nepal (IBN) Maha Prasad Adhikari highlighted in-depth discussions on polices and investment opportunities in Nepal and sharing of national and international experience related to investment in Nepal and prospects of financing infrastructure projects in Nepal.

Speaking at the concluding session, Binod Chaudhary, chairman of Chaudhary Group and the only billionaire of Nepal listed by Forbes, lauded the summit a success. He added that the real journey for the country has now begun.

Speaking as the chief guest, co-chair of the ruling Nepal Communist Party Pushpa Kamal Dahal said that it was time for the country to work for economic prosperity after the conclusion of peace process. Dahal also stated that the role of the private sector was indispensable for the country's overall economic development.

Prime Minister KP Oli had inaugurated the mega event as the head of a two-third majority government, which is touted as a stable and strong government that the country has seen after long. In his inaugural speech, PM Oli had vowed for the protection of investment and guarantee of profits.

A total of 15 memorandums of understanding have been signed during the summit that was participated by 735 foreign delegates from over 300 foreign companies coming from 40 countries. The government also showcased 77 projects including 27 of the private sector during the summit. IBN also vowed to continue communication and collaboration with the investors in future. The government has high hopes of bringing more foreign investment in its priority sectors, which had slightly fallen during the first year of the government.

A similar event was held in 2017 but the commitments worth US $13 billion made then have not been fulfilled.