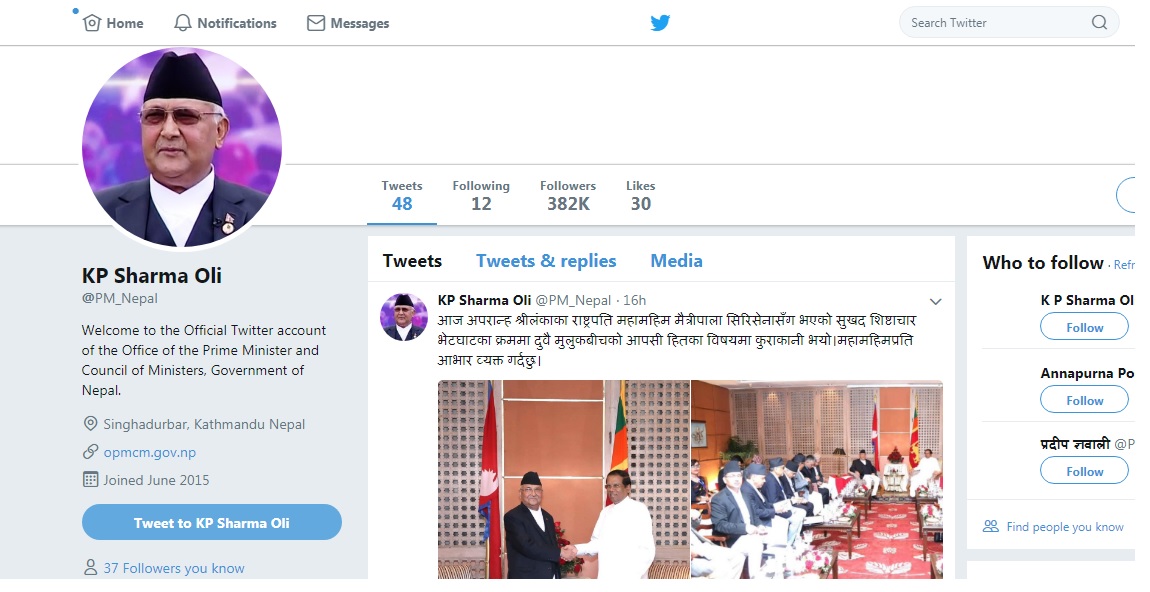 KATHMANDU, Sept 2: Following the government's decision to use the social networking sites to make dialogue with people effective and address their grievance promptly, the government agencies have expedited the use of the social media.

All the 21 ministries including the Office of the Prime Minister and Council of Ministers are using this new technology in the field of information and communications. All the ministries have created their official facebook and twitter accounts, and responding to people's concern directly. The concerned ministers, state minister and their secretariat too have been using the social media to disseminate official information and holding interaction with the users.

'Hello Sarkar' by the OPMCM is a very popular twitter handle which has been linking all the government agencies, as it responds to the public grievances and concerns. A total of 110 government agencies have been officially using twitter, according to Coordinator of Hello Sarkar Pradyumna Upadhyaya. More than two thousand government agencies are required to make use of the social networking sites to reach out to the people.

Many local level governments have also been active in the social media to further deepen their contact, communications and relations with the people. Naraha rural municipality of Siraha is one example when it recently announced the beginning of the 'poor household ID card distribution' through it twitter account.

Prime Minister KP Sharma Oli has been very active of late in twitter. He has been sharing the government's decision and related information immediately through his official twitter handle. He has also been issuing directives to the concerned authorities to address the people's grievances. As of late, Prime Minister Oli has been tweeting in five different languages.

The newly formed local governments too are found very active in making maximum use of the latest technology. With a very short span of their formation, the 753 local governments have already instituted their respective websites and also open facebook and twitter accounts. Some local level governments have gone a step ahead to also develop mobile applications.

NC seeks amendment to use of ‘my government’ by prez

KATHMANDU, May 5: The main opposition party Nepali Congress (NC) has demanded the government to replace the words ‘my government’... Read More...