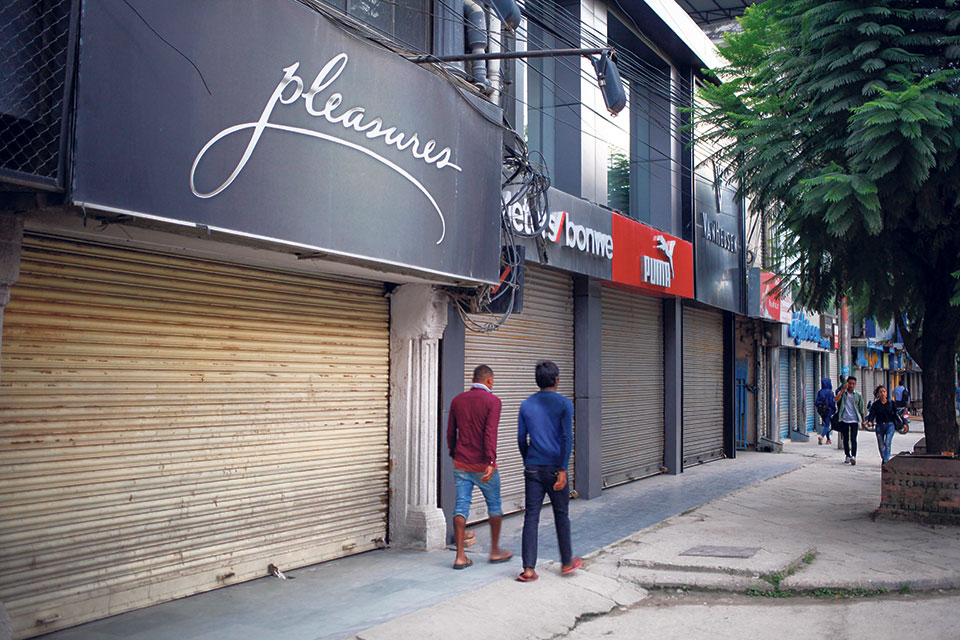 KATHMANDU, Feb 24: Reluctance of government agencies to pursue the case of tax evasion against nine outlets of 'branded' goods in Durbar Marg, Kathmandu, has been putting off the case from being closed.

Negligence of the government bodies on the issue has let the accused tax evaders run their businesses without restraint. Business analysts have said that this has set a bad example, and could encourage tax evaders.

Department of Revenue Investigation (DRI), which is the body responsible to investigate into the Durbar Marg tax evasion case, had said in December last year that to further the investigation, it needed evidence collected by the Department of Supply Management and Protection of Consumers' Interest (DoSMPCI) during the raids.

However, DRI has been slow in following up the case. Officials said on Thursday that the department approached the Metropolitan Police Range (MPR) for evidence.

"It has not been more than a week since we mailed the Metropolitan Police Range demanding the evidences and initial documents of the case," said Shekhar Poudel, information officer at DRI.

DoSMPCI, the initial investigator of the case, had transferred the evidences it collected during the raid to the MPR.

DRI's delay over demanding the documents and other evidences has prolonged the case, and has also indicated the department's poor grasp of the seriousness of the case.

Serious disagreement among the government bodies to coordinate over the case has also come to the surface.

Even though it has already been more than five months since the government authorities conducted the raid, investigators are yet to reach a conclusion.

The DoSMPCI had conducted series of raids on the outlets of branded goods in September, 2017. The department had forwarded the case to the Department of Revenue Investigation (DRI) on October 9 for further investigation.

A team led by the then Minister for Supplies, Shiva Kumar Mandal, had conducted the raids and sealed two shops in New Road and nine in Durbar Marg in early September on charge of fraud, overcharging customers, and evading taxes.

Four stores of branded goods -- Nike, Puma, Bentley, and Store One -- in Durbar Marg had failed to furnish proof of 'brand authorization' of the products that they were selling when demanded by the authorities.

KATHMANDU, July 9: A research conducted by the University of Manchester in May has found that community forestry has contributed immensely... Read More...

KATHMANDU, March 21: Police have arrested the prime suspect of the gang-rape of a girl that took place some two... Read More...

How Hukam derailed Nepal’s vaccine procurement: a story of power, greed and commission
3 hours ago

Private hospitals in Kathmandu charging up to Rs 50,000 per bed a day for COVID-19 treatment
21 hours ago

Hukam increased price of vaccine by 50%, just 12 days after SII communication
1 hour ago

O Brahmaputra and Bagmati, how can you flow?
19 hours ago

Hotels providing quarantine services can charge no more than Rs 3,000 per person a day
20 hours ago

Hukam increased price of vaccine by 50%, just 12 days after SII communication
1 hour ago

How Hukam derailed Nepal’s vaccine procurement: a story of power, greed and commission
3 hours ago

O Brahmaputra and Bagmati, how can you flow?
19 hours ago