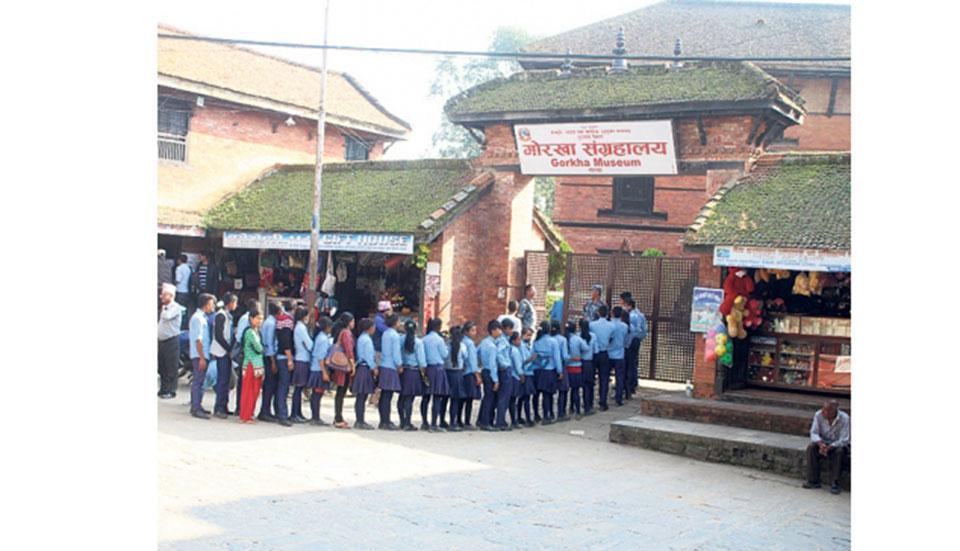 GORKHA, Nov 7: Gorkha has now transformed into a hub for educational tourism. With students from all over the district thronging the historical site, the Gorkha Museum currently welcomes a total of 600 to 800 students on a daily basis.

Many come to Gorkha to see the Gorkha Durbar and learn about Prithvi Narayan Shah's unification campaign and the Shah Dynasty. At Gorkha Museum, students get to witness first-hand what they learned in history books. Junu Rai, a student from Illam who came to Gorkha on an educational tour, said that it's easier to recall facts which she read in school after seeing them in photographs in the museum.

Museum chief Nabaraj Adhikari said that 10 percent of the total visitors to the museum are students. “The number of visitors reaches its peak from mid-September to mid-January”, Adhikari said. Students usually visit the Gorkha Museum, Gorkha Palace, Gorakhkali and Gorakhnath temples as part of their tour. However, the tour is short; sight-seeing the religious place takes only two hours.

Tourism entrepreneurs complain that they haven't been able to take maximum advantage of the tourists because of their short stay. There are no alternative destinations for the tourists to visit.

Moreover, with the ever-growing inflow of travelers into the district, vehicle parking has become a problem. In the absence of adequate parking space, tourists have been compelled to park their vehicles along the streets. Additionally, as there are only a few hotels in Gorkha, many are forced to travel to Aabukhairani for food.

Hotel owner Nidhi Prasad Timilsina said that if there were to be additional destinations in Gorkha so that the tourists could roam around for an entire day, the local tourism industry would be at greater profits. He suggests construction of a view tower and establishment of picnic spots to fulfill this agenda.

NUWAKOT, Jan 2: A unification torch rally is to be organized along the ancient route from Gorkha to Kathmandu via Nuwakot... Read More...