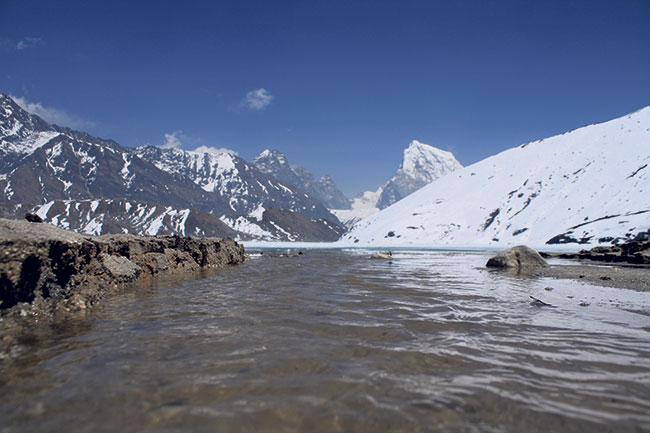 KATHMANDU, March 29: A recent study conducted by environmentalists and geologists has come up with an alarming finding that the rapid melting of glaciers with both horizontal and vertical retreats observed in recent years poses threats of cause drying up of several rivers or increase significantly the risks of Glacial Lake Outburst Flood (GLOF) across Hindu Kush Himalayan region.

An extensive research carried out by experts from Nepal Academy of Science and Technology (NAST), Tribhuvan University, International Center for Integrated Mountain Development (ICIMOD) and Godwana Institute of Geology and Environment, Japan, in Langtang Valley in Rasuwa district in 2017 revealed that glaciers in the region are retreating about 40 meters per year with total vertical retreat in the snout position of 100 meters, indicating that entire Hindu Kush Himalayan region is experiencing similar situation as a result of intense climate change.

The research study published in a reputed science journal from Canada has used all available long-term hydrological and meteorological data, satellite image analysis of glaciers from 1979 to 2009 and observation of local people and their experience on climate change issue to come up with the finding. The study revealed that Lirung glacier and the Kimjung glacier have retreated over 900 meters and 400 meters, respectively, over 30 years from 1979.

While Lirung glacier coverage area had shrunk by 62%, the total loss of glacial coverage area of the entire Langtang Valley watershed stood 24%. "The rapid retreat of glaciers in the region indicates that glaciers all across the Hindu Kush Himalayan region are experiencing similar situation. This is a matter of worry in view of its potential threats to overall environment and the livelihoods of marginal communities residing downstream the affected area," said one of the authors of the study, Prof Tara Nidhi Bhattarai at Department of Geology, Tribhuvan University.

Prof Bhattarai said that the rapid retreat of glaciers as has been observed increases the volume of water in the glacier lakes, increasing significantly the threats of GLOF that may threaten marginalized communities residing downstream the affected areas. "The finding of our study also shows that the volume of water in the snow-fed rivers are likely to go down significantly or dry up completely in the near future if the current trend of glacial retreat in the Himalayan region goes unabated. This will not only pose threats to our environment but also our survival," he said.

Although there has not been proper research on the increase of the volume of water in the snow-fed rivers as a result of global warming, the government has identified six glacial lakes in the high Himalayas as being at serious risk of outburst. According to Department of Hydrology and Meteorology, Tsho Rolpa of Dolakha, West Chambling and Lumdi glacier of Solukhumbu district, Thulagi of Manang district and Lower Barun of Sankhuwasabha district are at high risk of outburst as a consequence of intense retreat of glaciers in the region.

Officials said the water of Imja glacial lake has been drained out with the help of Nepal Army, reducing significantly the risk of its outburst.

Besides Nepal, two other South Asian countries -- Pakistan and Bhutan -- with Hindu Kush Himalayan range are experiencing similar risks as a result of climate change.

According to a recent study conducted by Focus Pakistan, an environmental NGO, thirty-six glacial lakes in various valleys of Gilgit-Baltistan have been declared dangerous, with seven of them likely to pose serious threats to people.

The study said the surge of the Khurdopin glacier in Shimshal Valley, Hunza and the formation of a lake has emerged as a major cause of concern for geologists and local residents. Gilgit-Baltisian has been facing several environmental threats since the launch of the China-Pakistan Economic Corridor (CPEC), a multi-billion infrastructures and development-related project, according to the study.

According to a study conducted by ICIMOD, there are 25 glacial lakes identified as potentially dangerous in Bhutan with Thorthormi Lake considered to be the most dangerous one. Studies have shown that these lakes have also shown rapid glacial retreat in recent years as a result of climate change.

LALITPUR, Feb 3: The environmentalists of the countries of Hindu Kush Himalayan region have underlined the urgency for carving out... Read More...

KATHMANDU, Oct 22: Around 13 metric tonnes of waste were collected from the major rivers including Bagmati River and their... Read More...