Girl disowned by in-laws for being Dalit, husband out of contact since months 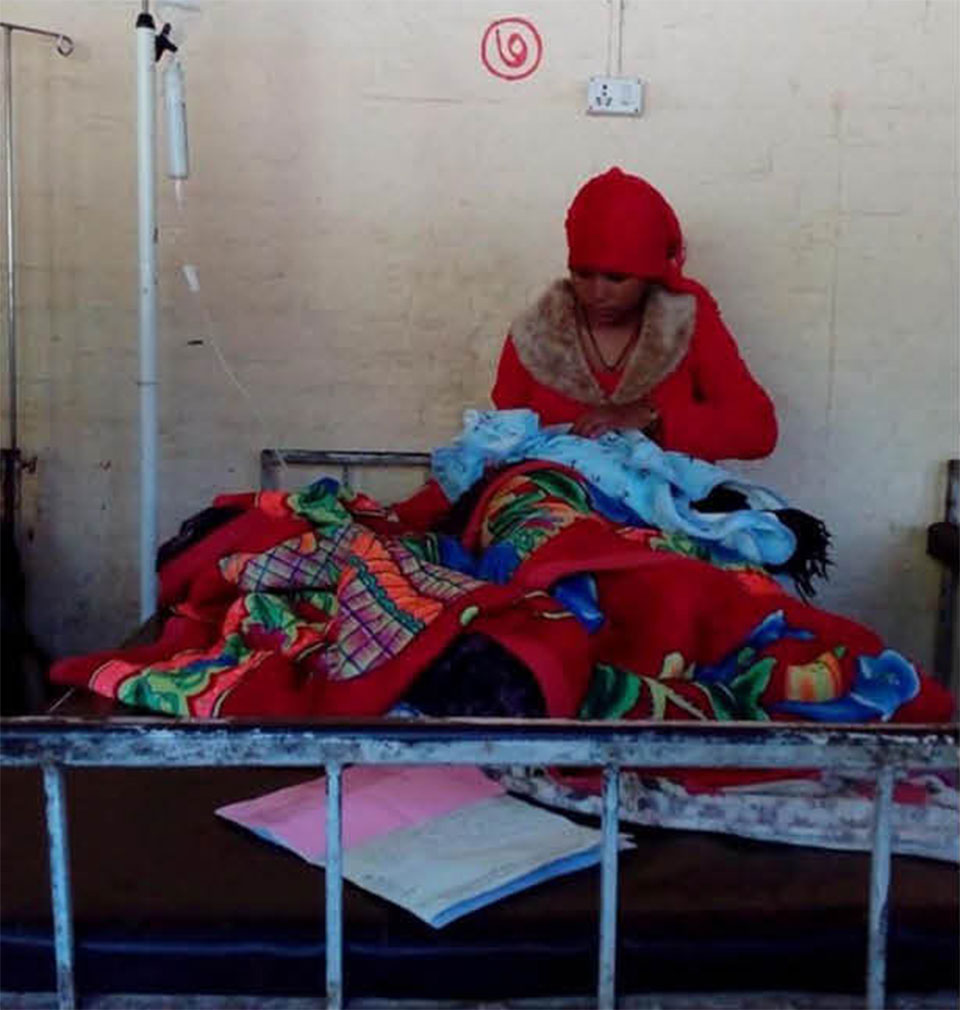 Sangita along with her newborn son in a hospital.

RAJBIRAJ, Dec 16: It had been seven days since Sangita Sada, 20, of Bodebarsain Municipality-2 was admitted to Ram Kumar Uma Prasad Memorial Hospital in Lahan after labor pain. She delivered a baby after a c-section surgery. Currently, the condition of her newborn is critical. Even after a week, her son is refusing breast-feeding.

Doctors have been continuously urging Sangita's family members to take both the nursing mother and the son to a well-equipped hospital for treatment. However, Sangita laments that her family cannot afford such treatment. Sangita's father Bhola Sada hardly earns two-square a meal by toiling all day as a laborer.

Sangita's husband Shivadatta Chaudhary, 22, is has gone out of contact since the last eight months. Sangita, who was having an affair with Sgivadatta since some time, had eloped with him on December 16 last year.

They could not even get the blessings from their parents during their marriage as they were against inter-caste marriage. Sangita's father Bhola laments that his daughter and grandson are having a miserable time in the absence of her husband. After spending three months together in different places, Shivadatta left her at her parents' home promising to come back soon.

Sadly, he has not returned since then.

"He had promised to be with me forever but left me alone during hard times," said Sangita. Her in-laws have been preventing her from entering the house as she belongs to a lower caste.

"My in-laws refuse to own me saying I belong to the Dalit community. My parents blame me for my misery and my husband is not here to take care of me and my son," said Sangita with teary eyes.

She suspects that her in-laws have hidden her husband and are planning to marry him off to the girl of their caste. She has repeatedly knocked the doors of various organizations and human rights activists seeking justice. Currently, an organization named Janchetana Dalit Sangam is working to solve her problem, informed Ganesh Ram, director of the organization.

According to Ram, parents of both the bride and the groom were called to the Area Police Office (APO), Bodebarsain to find a solution. But still, they could not reach to an agreement. He stated that he too suspects that the family members are forbidding Shivadatta from meeting and accepting Sangita as his wife. Following the complaint lodged by the victim, the APO has intensified search for Shivadatta.

Sangita along with her newborn son in a hospital.

Three children killed due to drowning

LAHAN, July 29: Three children died due to drowning in ponds in separate incidents of Siraha district on Sunday. ... Read More...

India to resume export of Covishield vaccines from next month, neighboring countries to get first priority
6 hours ago