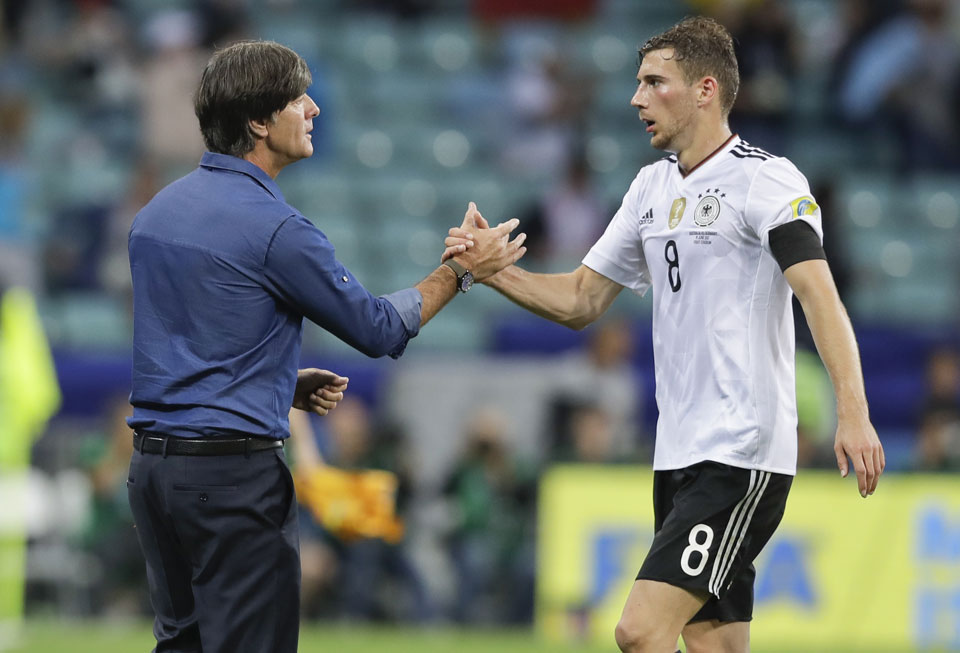 SOCHI, June 20: The learning curve facing an inexperienced and experimental German side became clearer to coach Joachim Loew after they were given a fright by Australia at the Confederations Cup on Monday.

It wasn't just goalkeeper Bernd Leno's two blunders but the way Germany eased off in the second half that bothered Loew. Still, Germany held on to open its Group B campaign with a 3-2 victory in Sochi.

"Who would expect it to be perfect?" Loew said through a translator. "This is a team that never played together so we have done a lot of work over ten days."

For Loew this eight-team World Cup warm-up competition is merely a stepping stone on the path to defending the title won in Brazil in 2014.

"We were losing our thread, our attacks were not as consistent and we weren't single-minded," Loew said. "We need to work on maintaining our stability ... but this is a new team and things have worked very well."

Only two members of Germany's 2014 World Cup-winning squad started the game in Sochi and, while the team was dynamic going forward, it was vulnerable at the back.

Lars Stindl marked his tournament debut with a goal after five minutes that was canceled out by Tommy Rogic when the Australia forward fired the ball under Leno.

Julian Draxler, an unused substitute in the 2014 World Cup final win over Argentina, restored Germany's lead from the penalty spot before halftime.

Although Leon Goretzka extended the German lead three minutes into the second half, another blunder by Leno ensured it was a nervy conclusion to the game in the Black Sea resort. A shot from Rogic through a crowded penalty area was spilled by the Bayer Leverkusen goalkeeper and Tomi Juric stabbed the rebound into the net.

The Australian threat persisted but Germany clung on to collect three points in the Fisht Stadium, where around 20,000 seats were empty.

"We invested a lot in the first half and ran a lot," Germany defender Joshua Kimmich said. "So in the second half, Australia had a bit more possession but I didn't think they had a lot of opportunities and chances."

Australia is taking the trip to Russia far more seriously, bringing a full-strength squad unlike Germany. Contrary to assertions from coach Ange Postecoglou before the game, the Australian side was marginally older than its opponent.

Germany's rawness wasn't obvious at all early in the game when a goal was created after only five minutes. Stindl exploited vast gaps in the center of the pitch to advance unchecked to meet a cutback from 21-year-old winger Julian Brandt.

At 28, Stindl is the second oldest player in the squad. The oldest tried to join him by also scoring his first tournament goal, but Sandro Wagner's diving header was off target.

The gulf in quality was clear, and yet the callow Germans discovered the perils of not killing off a game.

Australia was posing no threat when Draxler gave the ball away around the halfway line, leading to the equalizer against the run of play. Rodic's shot came off defender Shkodran Mustafi and he followed up with a shot that went under Leno.

Parity, though, was only in place for around two minutes. Goretzka was brought down by Massimo Luongo's sliding challenge in the penalty area and Draxler made amends for his early sloppiness by restoring Australia's lead from the spot.

It was extended further three minutes into the second half. Kimmich threaded the ball through to Goretzka to beat Ryan at his near post.

While Kimmich showed much promise, Leno demonstrated that he's far from being a contender to replace 31-year-old Manuel Neuer in the German goal when it really matters for the world champions.

"He could have held on to that ball but he is a good goalkeeper no doubt about it," Loew said. "Maybe that was a mistake."

KATHMANDU, Nov 16: A police squad deployed from Metropolitan Police Range, Jawalakhel on Monday arrested two pickpockets while they were in... Read More...