Feelings of citizens should be taken into consideration while delineating local bodies: Speaker Gharti 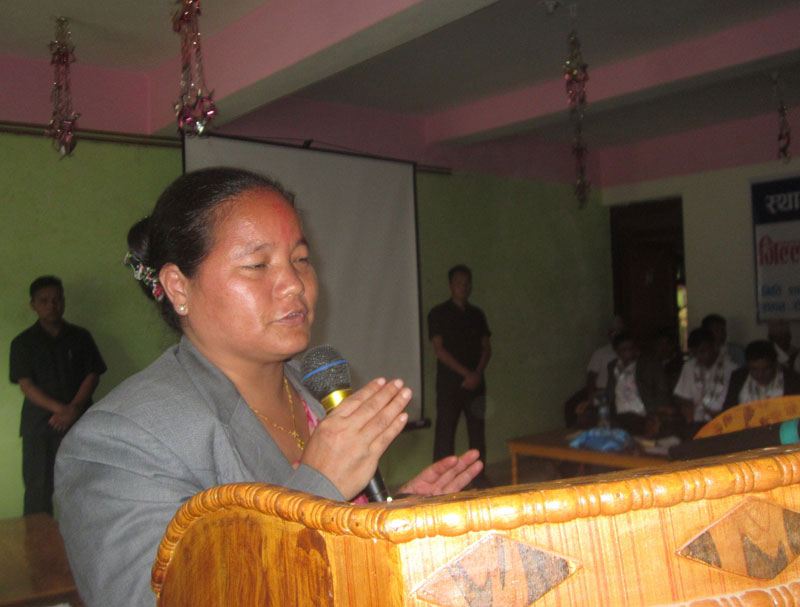 ROLPA, Aug 10: Speaker Onsari Gharti has said that the opinions and suggestions of the Nepali citizens should be taken into consideration while restructuring the Village Development Committees and municipalities.

Onsari stressed that linguistic and cultural aspects are other crucial criteria that should be taken into consideration while demarcating the village and municipal committees.

Meanwhile, she also urged the villagers to make suggestions on the delineation of the local bodies.

She stated that the technical team on local electoral bodies in Rolpa must come up with such an idea that should be a guideline for the entire country.

“The sate looked down upon us in the past. It never made us realize the presence of the state. That’s why we had to wage a decade-long insurgency,” said Onsari, reflecting on the past. “Now the time has come to build new Rolpa.”

Chief Whip of CPN-UML Gokul Prasad Gharti Magar stressed that restructuring should be done based on the existing areas of village and municipal committees and added that the geography and number of people should also be taken into consideration while restructuring the local bodies.

Countering his argument, Onsari said that it is unnecessary to squabble over the delineation of local bodies and suggested that it should be done in line with the provisions laid down in the Constitution.

Similarly, former Assistant Minister for Tourism and Civil Aviation Bhim Kumari Budhamagar suggested that the municipality should be delineated on the basis of the existing 11 VDCs of the district.

There are altogether 49 VDCs in the district. Of them, 28 VDCs have already submitted their suggestions on the delineation of the local bodies.

According to the Constitution, the village committee is entitled to 22 rights including keeping municipal police, animal husbandry, details of unemployment, managing cooperatives, minerals, operating FM radio, 10 plus 2.

There will be many as 70 employees in a village committee led by an under-secretary, committee told Republica Online.

Naya Shakti for elections after restructuring of local bodies

KATHMANDU, July 1:Coordinator of the newly-formed party Naya Shakti Nepal, Baburam Bhattarai, has said that the local elections should be... Read More...