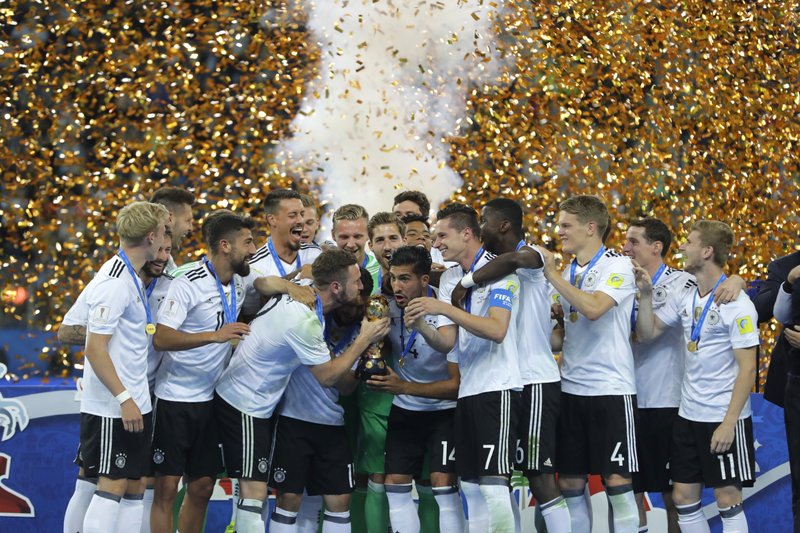 The only goal in St. Petersburg came in the 20th minute from the 28-year-old Lars Stindl, who tapped into an empty net after a defensive blunder. While the midfielder was the oldest player in a starting lineup with an average age under 25, he only made his international debut less than a month ago.

“This was a magic match for us, for our young players who don’t have this international experience,” Loew said. “The way we were so single minded in this victory, it was very impressive”

Stindl’s third goal of the World Cup warm-up tournament came completely against the run of play in a first-half dominated by Chile. But the more experienced south American champions, whose lineup had an average age over 30, could find no way past a side that is effective on the counterattack.

Chile’s frustrations were clear in the second half when Chile midfielder Arturo Vidal squared up to Bayern Munich teammate Joshua Kimmich, who was also shoved by Gary Medel.

“Our team today had to fight back a lot,” Loew said, “because the Chileans are very robust players, especially in one on ones.”

Gonzalo Jara elbowed Germany forward Timo Werner in the face but escaped with a yellow card despite the incident being reviewed by the referee on a pitch-side monitor.

It was the latest moment of confusion during trials of the video replay system by FIFA, which is determined to retain the technology at the World Cup next year in Russia despite major teething problems.

Russia’s capabilities as a host for the World Cup next year became far clearer during the two weeks it hosted eight teams in four cities, as the country overcome concerns about fan behavior to provide a welcoming environment. The eighth — and probably last-ever — Confederations Cup has also proved a useful testing ground for Germany, with Loew able to test the capabilities of the talent at his disposal.

Victory in St. Petersburg came two days after Germany beat Spain in the Under-21 European Championship final, signaling a bright future for a country which will return to Russia in a year to defend the World Cup won in Brazil in 2014.

Only three members of that 2014 squad even made the trip to Russia. The squad didn’t rely on one star to carry it to glory, with goals shared throughout the team. Stindl, Werner and Leon Goretzka netted three apiece across five matches.

“Jokingly, we could say that now we have to think about which of the players we left at home we can still add to this team next year,” Loew said. “Seriously though, we have created alternatives, by giving young players experience.”

Unlike in the group-stage draw with Chile, Germany avoided conceding an early goal — only just.

The pivotal moment that swung the final in Germany’s favor came after 20 minutes. Arturo Vidal’s long-range strike was parried by Germany goalkeeper Marc-Andre Ter Stegen and Alexis Sanchez followed up with a wayward shot.

Then Germany launched a counterattack from inside its own penalty area that ended with the only goal, despite Marcelo Diaz’s attempts. The Chile midfielder turned and tried to clear the ball on the edge of his penalty area but didn’t spot Werner lurking. Goalkeeper Claudio Bravo was drawn off his line and Werner squared to Stindl, who had the simplest of tap-ins.

“The goal changed everything,” Chile coach Juan Antonio Pizzi said. “It changed the way the players felt, it also made our opponent stronger of course. They felt better immediately.”

And had opportunities to extend the lead, with both Goretzka and captain Julian Draxler striking wide, while Chile didn’t eradicate its mistakes.

Gonzalo Jara’s clearance across the pitch went straight to Draxler, who set Goretzka up for a shot that Bravo saved.

When the halftime whistle blew, Germany immediately headed down the tunnel but the Chileans gathered in a huddle on the pitch for an impromptu team talk.

It had little effect, with Germany preventing the Chileans from gaining the possession they enjoyed in the first half. However much Sanchez tried to produce the equalizer, the striker was foiled as Germany held on to win the Confederations Cup for the first time.

It might never be defended, with the eighth edition likely to be the last. The competition — featuring the regional champions, World Cup holders and next World Cup hosts — failed to spark much interest outside competing countries. Qatar, the 2022 World Cup hosts, also cannot stage the Confederations Cup in 2021 because it would have to be played in November or December and disrupt a second European club season.

Three former champions lost at home at the start of the final round of qualifying for the 2019 African Cup... Read More...