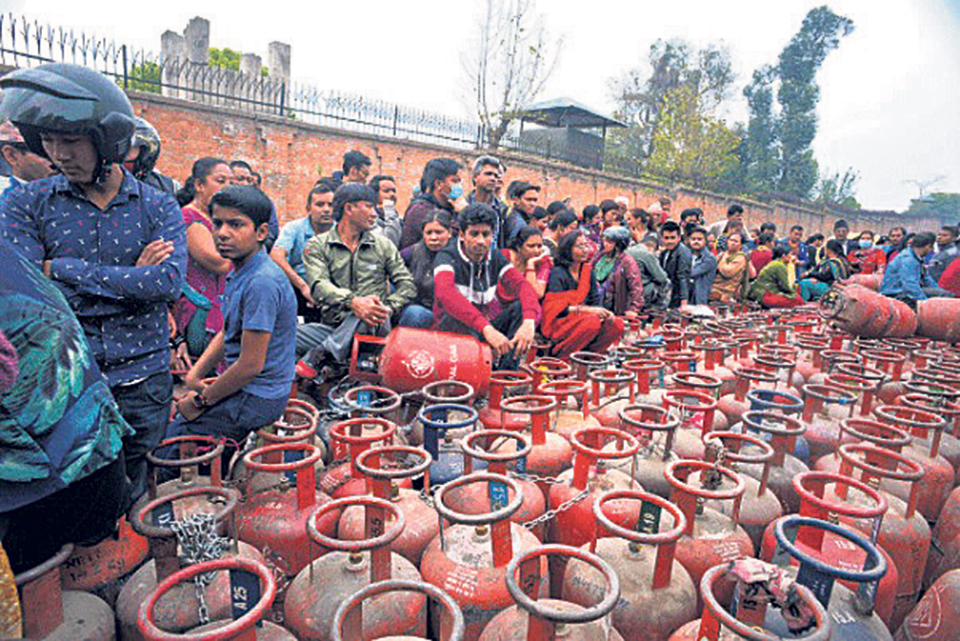 KATHMANDU, March 27: Nepal Oil Corporation (NOC), in a bid to ease the supply of cooking gas, has directed the gas bottling companies to sell half-filled cylinders to the customers.

In the aftermath of the Indian government announcing a lockdown of the country for 21 days, the state-owned monopoly has been facing a whopping demand for the liquefied petroleum gas day by day. Although the decision of the Indian government is reported not to affect the supply of fuel to the landlocked countries, consumers are hoarding the cooking fuel that has put immense pressure on the authorities to maintain the supply.

Normally, the government takes such measures to control the supply of essentials as a rationing measure to regulate the market during such crises.

Currently, consumers are reeling under an acute shortage of cooking-gas with the lockdown announced by Nepal and India citing the risks created by COVID-19. Nepal government had taken a similar decision of distributing half-filled gas cylinders during the shortage of the cooking fuel during the four and a half months long unofficial trade embargo imposed by India on Nepal in 2015.

According to the NOC, Nepal imported cooking gas enough to fill up 425,000 cylinders in the past three days. The average demand for the gas stands at 100,000 cylinders per day. “However, in the absence of controlling measures, many consumers are found putting their empty cylinders on queue immediately after purchasing a cylinder of gas,” said a high-level official of the NOC on condition of anonymity.

With a surge in demand, the black market of cooking fuel has also started to surface of late. Seeking to reap undue benefits from the difficult situation, many gas companies are even found selling new cylinders. “The NOC has enforced the system keeping in view that it will produce strategic impacts on the domestic market,” said the source.

According to the official, it will help control the selling of new cylinders as it will raise the overhead costs of the gas companies - something that is also expected to check black marketeering of the cooking fuel. “In addition, it will increase accessibility to more consumers and ease the supply. Likewise, it may also induce the consumers to switch to using electricity through a controlled use of the cooking gas,” the source said.

According to the officials of the NOC, the corporation has asked all the bottlers to clear their stocks of fully-filled up cylinders by Friday. “The half-filled cylinders will come online from Saturday,” said an official of the NOC.

According to NOC's records, there are a total of 12 million LPG cylinders in circulation in the market. Of these, 1.5 million cylinders are being used by households while the remaining are used by the commercial sector.

Induction stove an alternative for people during lockdown