Digging through garbage to track down Bagmati polluters 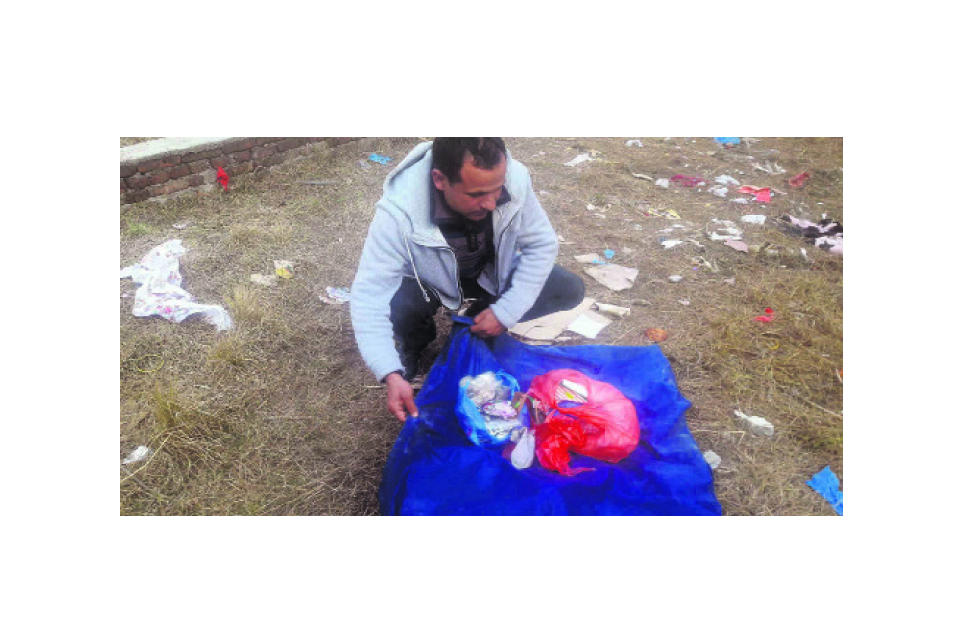 KATHMANDU, Feb 11: Have you been secretly dumping your domestic waste in the Bagmati River, thinking no one is watching? Beware! You might end up getting caught anyway.

A group of Bagmati corridor cleanup activists has been rummaging through the sacks and bags of solid waste dumped at the riverside stretch of about 3.5 kilometers, searching for possible clues about the river polluters. And in three years, they have already caught about 70 persons.

The group which consists of five activists from the Bagmati Beautification Concern Platform (BBCP) has been consistently investigating into the waste thrown in the river. Coordinator of BBCP Uttam Pudasaini and activists Binit Raj Aryal, Ram Hari Shrestha, Pema Chhiring Sherpa, and Kaji Shrestha are in the group. They have been keeping watch of the cleanliness of the 3.5 kilometers of the river stretch from Gokarneshwar to Jammudada for years now searching for potential clues in the garbage-filled bags.

“There are always clues left behind in those garbage filled bags,” one of the activist, Binit Raj Aryal told Republica, “We track down the polluters through those clues.” Aryal, who is also the secretary of the Makalbari Area Improvement Committee, said that the area has seen a huge leap in waste management due to the investigation campaign.

“It could be recharge cards, school bills, medical bills, Identity cards of school children and so on,” he said, “Once, we get these clues; we track down the polluters and take necessary action.”

When found guilty of dumping waste at the riverside for the first time the culprits are just warned and made aware of the significance of the river. But when they start repeating the mistake they are fined Rs 1,000 each. The amount collected as fines goes to the treasury of the area improvement committee.

The activists contact the polluter through the bills that they find or reach out to the telecom company to gain the details of the person who recharged their mobile phone using the recharge card.

Aryal added that the telecom companies tend to be very happy to be of any help in such an investigation. “The people from Ncell and Nepal Telecom are very friendly and comply with us when we request them for the information of the recharge card,” he said.

A few months back, the group tracked down a polluter using a recharge card. “One morning we found a big sack of rotting meat in the river,” Aryal said, “When we got the information from the telecom company we realized that it was the proprietor of a local meat shop that had dumped the waste.”

The team baited the shopkeeper to the spot where the garbage was found by offering to buy a large shipment of meat and showed him the waste. Aryal said that he confessed, at once, to the misdeed.

According to Aryal in a majority of cases, the polluters tend to be of the Sundarijal area whose waste flow to Makalbari area. In addition to these people, the activists have found that many of the people who live in rented rooms and tend to forget to dispose of their waste to garbage trucks, pollute the river.

Aryal claimed that the people are now becoming aware about the cleanliness of the river and have opted not to throw garbage into the river anymore. “We haven't had to conduct any garbage investigation in the last three months,” he said, “We are happy that the locals have stopped throwing their waste in the river.”

KATHMANDU, April 1: Two minors have downed to death in the course of swimming in a pond on the bank... Read More...

NAST identifies 10 sites as most affected places by Sisdole Landfill

KATHMANDU, Jan 29: Nepal Academy of Science and Technology (NAST) has submitted its report on the environmental impact assessment at... Read More...