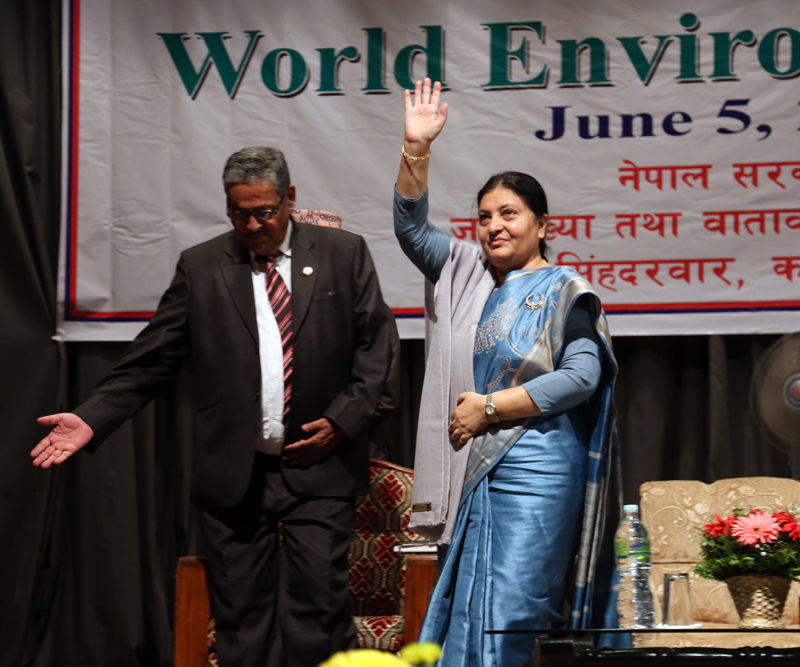 KATHMANDU, June 5: President Bidya Devi Bhandari has called on one and all to dedicate themselves to the conservation of the environment, the most essential factor of the sustainability of life of Earth by heart, word and deed.

Addressing a ceremony organised by the Ministry of Population and Environment here today in the commemoration of World Environment Day that is celebrated on June 5 every year, the President appealed to all to guarantee a beautiful future for the future generation through the means of conservation and promotion of valuable and distinct flora and fauna and forest areas.

"We all should unite to work for the creation of a healthy, clean and lively environment by addressing the impact of climate change."

The celebration of the Environment Day was not just a matter of formality, rather it must be taken as a great opportunity for beautifying the nature and keeping it alive and then making promises towards meeting the goals of integrated and socio-economic development, the President added.

"The celebration of the Day itself carried a great meaning in the context of Nepal, the country rich in natural and biological diversities, when the environment degradation caused by climate change has been the global phenomenon," the Head-of-the-State said.

The Nepal Constitution has ensured the rights of a every citizen to live in a healthy and clean environment, the President said, insisting on the need of collective efforts among the government, private sector, non-government sector, development partners and masses to create a ground for enjoying such right.

She praised the local communities for their significant contribution to environment protection by conserving water, forest and land, stressing on the integral connection between nature and humans.

The Head-of-the-State Bhandari said, "The success of the community forestry is famous and exemplary to the whole world. Nepal is rich in natural resources which are the sustainable basis for the economic and social development for the rural communities."
She noted that the national parks and wildlife reserves, protected areas, the watershed conservation project and the President Chure Conservation Programme have contributed to maintaining the global environmental balance.

The President underscored prioritizing the protection and preservation of forests and natural heritages that help sustain rural tourism and in the infrastructure development, their systematic management and prudent use at the community level.
The World Environment Day is marked across the globe on June 5 amidst various programmes. The United Nations Organisation's General Assembly in 1972 declared June 5 as the World Environment Day.

The World Environment Day theme this year is – Connecting People to Nature.
At the programme, Minister for Population and Environment, Jayadev Joshi said that the environment protection movement has gained pace in the country along with the economic and social development with the establishment of the federal democratic republic.

Acting President of the Environment Protection Committee of the Legislature-Parliament, Man Bahadur Bishwakarma said the local levels should play an effective role to preserve and promote the environment in course of implementing the constitution.

Similarly, secretary at the Ministry Dr Bishwanath Oli shared that the area covered by forest was extended by five per cent in comparison to the past.

It is shared that this year's 'Environment Preservation Award-2074 BS' has been provided to Women Children and Environment Reforms Centre Makawanapur (under institutional category) and environment campaigner Lal Bahadur of Kailali (under individual category). Both the awards carry a purse of 150 thousands rupees.

Similarly, 'Environment Preservation Women Award-2074 BS' has been provided to Indira Parajuli of Kaski. The award carries a purse of Rs 50,000.

Likewise, the Environment-friendly Industry Award-2074 BS has been awarded to Unilever Nepal, Environment Journalism Award has been provided to Laxmi Prasad Upadhyay and Climate Change Management Award to Abhishekh Shrestha.

On the occasion President Bhandari had provided the national flags to the youths preparing to set out on a motorbike tour to South Asian countries aimed at creating awareness for the environmental preservation. RSS

KATHMANDU, Aug 31: Inspired to do something for protecting environment and fighting against HIV/AIDS, Dr. Amrit and Ajit Baral, two... Read More...