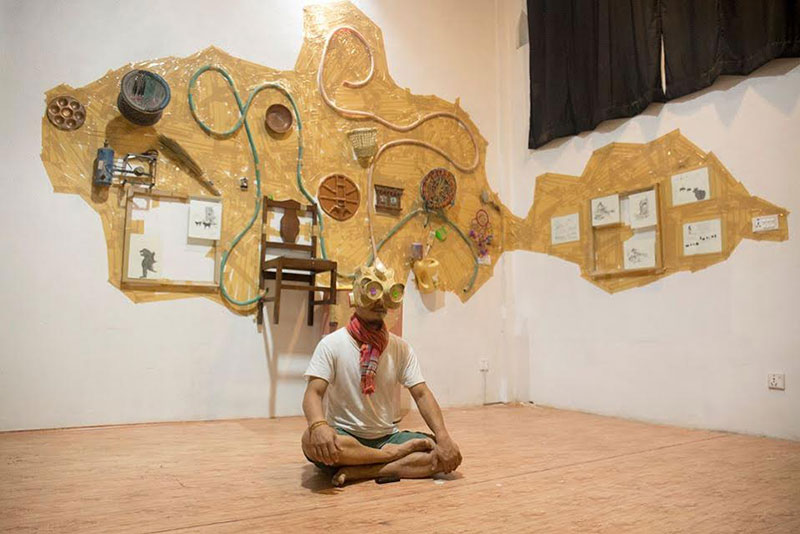 And they displayed their works at Artudio, Chhauni Hospital Road in the capital, from August 12 to 13 amid celebratory traditional music. At the studio, ‘powered’ feebly by earthen lamps and tiny bulbs to give visitors a feel of Gairimudi, a collection of objects like a chair, a broom held tightly by a broken torchlight (a fine example of the modern supporting the traditional), a finely-woven mat, rubber pipes linked with a drum, among others, were a center of attraction.

When it comes to the perennial shortage of power, Kathmandu, the capital of this so-called water resources rich country, fares no better than Gairimudi. Recent reports with NASA satellite images show that the Earth in general never looks dark, thanks to uninterrupted power supply in many parts of the world. But Nepal is a different case, despite the fact that we had visionaries, including a former prime minister, who even aspired to export hydropower to energy-stressed parts of the world via satellites. The leader in question is no more, but his dream lives on, giving us hope that one day we will be able to illuminate power-stressed humanity in the neighborhood and beyond via our own satellites before lighting our very own lives!

Back to the collection now. The broken torchlight-fitted broom, the chair, the mat, the rubber pipes and other objects had stories of their own, as Gaurav Poudel, who was involved in managing the exhibition, revealed during a casual talk on the evening of August 12th. According to Poudel, these were some of the objects that survived the disaster. Artists from Kathmandu pieced together these objects to give them a meaning.

Like any place in any part of the world, Gairimudi has many identities and not all of them are positive. For example, it is a water-stressed village—the Tamakoshi River, on whose banks the construction of a 456-MW Upper Tamakoshi Hydropower Project is underway, is quite far from the village—and villagers have to trek long and hard to fetch water. The pipes straddling the artwork are, according to Poudel, paths that villagers negotiate to reach the source of water represented by the drum.

Visiting the exhibition and observing those artworks of up-and-coming artists was a delightful experience. Handwritten brochures and Poudel’s insight helped me understand the artworks and Gairimudi better.

But the modern artists’ assertion in one brochure—that Gairimudi is far from the artscape—is a plain, simple and simply unfounded statement. If that were the case, what have craftsmen like Chhabi Bahadur Shrestha been making out of bamboos all these years? What of mats made of locally available materials? Are they not artworks? And what of fine music local musicians make using traditional instruments? Does it not fill your heart with joy? What is art if this piece of music cannot qualify as art?

As the Dolakha Album shows, Gairimudi is trying to rise from the ashes of destruction resulting from last year’s quakes. The troubled, predominantly Tamang village is also home to other castes and ethnicities as faces carved out of Supala (curved sheets of sorts that cover bamboos) show. But then which part of the world is safe these days? Nice? London? New York? New Delhi? Mumbai? Paris? London? Brussels?

Don’t get misled here, for it’s not terror that threatens this idyllic village. Occasional jolts can happen anywhere and that is no reason to keep you off Gairimudi.

So when are you visiting Gairimudi?