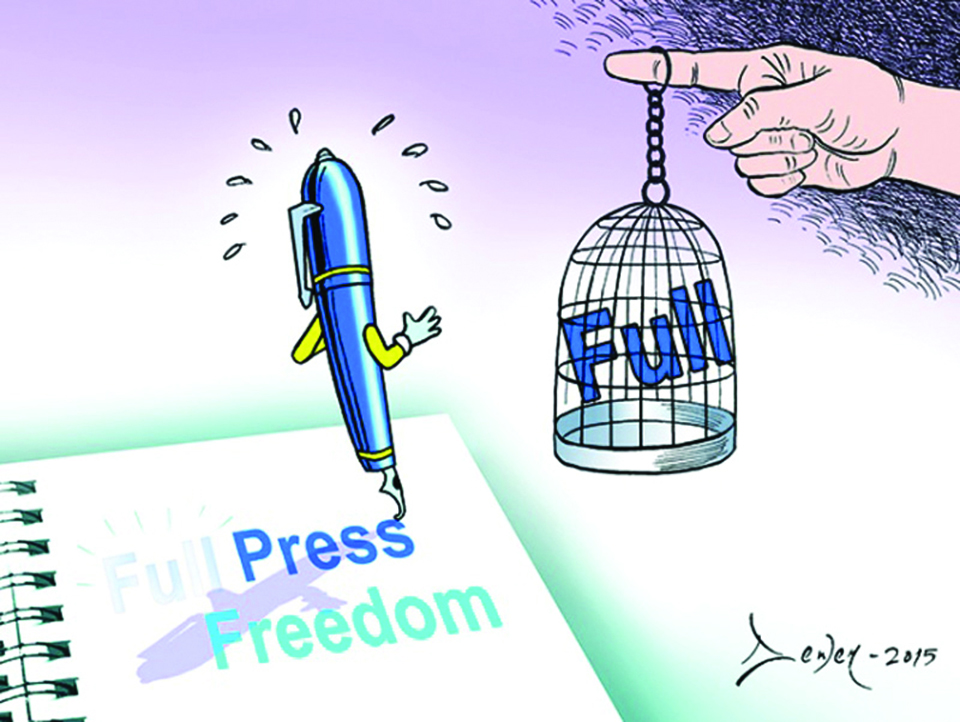 Instead of reviewing its own faulty policies and mending their ways, the government ministers are becoming more and more intolerant to media and public criticism

Prime Minister KP Sharma Oli often refers to his 14 years of imprisonment during the Panchayat regime “for the sake of democracy,” but his working strategies and actions of his government barely reflect democratic characters. Despite the fact that he leads the two-thirds majority government, he fears public criticism and cannot tolerate it if anything is written against him.

Disgracefully, he dictated his cadres in September to counterattack his opponents ‘like a swarm of hornets.’ Individuals who want to express critical opinions of the government self-censor themselves due to the fear of government actions and reprisal from the “hornets.” On completion of nine months of his rule, this article assesses some approaches of his government which seem directed to suppress media criticism and controlling media space.

Practice of releasing cabinet decisions to the public through various media outlets had started in 1990 after the restoration of multiparty democracy. The tradition was more systematized after the People’s Movement in 2006. Ever since, the government decisions have been made public immediately after cabinet meetings. This is a widely practiced democratic norm in order to ensure transparency of government activities and to safeguard people’s right to know.

The current government discontinued this democratic tradition on November 11, and began to withhold government decisions at least for a week.  The Communication Minister and government spokesperson Gokul Baskota and Prime Minister’s press advisor Kundan Aryal have insisted that the government intends to adopt effective measures to deliver government decisions every Thursday, and provide opportunities to journalists for interaction with government officials about those decisions. Minister Baskota, however, is already infamous among media stakeholders for hiding key cabinet decisions, and fabricating the truths.

The government faces overpowering criticism over its policies and activities that include unfair construction biddings, biased political nominations, and misuse of budget. The government’s tactic of keeping the public in the dark for a week about cabinet decisions is against the spirit of the constitution that ensures “full press freedom” in its preamble and Right to Information Act. Media persons have rightly opposed this move as a strategy of the government to avoid public criticism as well as avert potential legal challenges in the Supreme Court.

The Civil and Criminal Codes came into effect on August 17, drawing an outpouring criticism against some provisions that could limit press freedom and people’s freedom of expression. According to the new law, anyone (including journalists) cannot record or listen to the personal conversation without their consent (Section 293), disclose private information without approval (Section 294), take pictures even in the public without their permission (Section 295), send or receive unauthorized information on any electronic medium (Section 298), and publish satires or cartoons that disrespect individuals (Section 306). If one violates these provisions and publishes any information that is deemed to be “confidential” under the new code, they may face up to three years of imprisonment or fined up to Rs 20,000.

National and international stakeholders including Federation of Nepali Journalists, the Reporters Sans Frontiers (RSF) and Committee to Protect Journalists (CPJ) have argued that these provisions are against the spirit of the country’s constitution. They are of the view that implementing the new law in its current form restricts journalists’ access to information and weakens democracy itself. The RSF contends that these provisions are “unacceptable censorship tools” that seriously undermine press freedom and freedom of expression.

Yes, privacy is important in the age of Internet. The new criminal code, however, discourages whistleblowing and sting operations that are important tools for journalists to expose corruptions and wrongdoings of persons in power. These restrictions are against the constitutional guarantees smack of authoritarian tendencies.

Oli government’s anti-media move does not stop here. The government agencies started formulating social media use policy to control government criticism on various digital platforms. The General Manager of the Nepal Airlines, for example, circulated a memorandum on September 9 to its employees that strictly prohibits writing negative comments, sharing critical photos or news stories, or liking any posts that are against the interests of the Airlines. Similarly, the Ministry of Education, Science and Technology endorsed a social media directive on October 31 that bars its employees across the country from criticizing government activities and political parties.

However, if any one defends or endorses government decisions with positive comments in social media platforms, they are welcomed.

Electronic Transaction Act-2008 has been further enforced to discourage people from sharing negative posts, pictures and unpleasant news stories on social media. Nepal police, for instance, arrested journalist Raju Basnet on cybercrime charges on September 10 for sharing a news story, published in Dristi weekly. Though the journalist was released on bail after four days in police custody, the case is still under judicial investigation. Using the same Act, police arrested Homnath Sigdel, a Ward Secretary of Kavre district, on August 21 for sharing a distorted image of the Prime Minister two weeks earlier.

The truth is this government is manufacturing unrealistic agendas—the ones that cannot be implemented—to prolong its stay in power. Media and general public have been criticizing the government for the same reason.  Instead of reviewing its own faulty policies and mending their ways, the government ministers are becoming more and more intolerant to media and public criticism.

The government needs to work to address public expectations. Unless it drastically improves its working strategies media fraternity will continue to write critically of the government. Given its anti-media stance, however, there is not much hope for press freedom and freedom of expression in Nepal.

The author, a research scholar, is affiliated to University of Ottawa, Canada

With the mass intelligentsia ready to pounce upon his critics, Oli is confident that he can cut the media and... Read More...