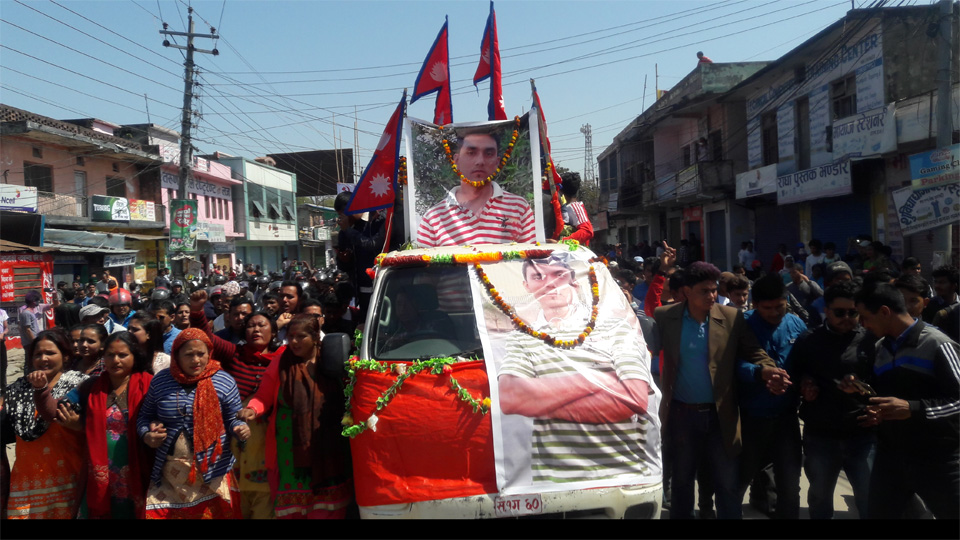 DHANGADHI, March 12: The funeral procession for Govinda Gautam, who died in the firing of the Indian  Seema Suraksha  Ball (SSB), has begun from Dhangadhi.

Thousands of Nepalis including district level leaders of Kanchanpur and Kailali are participating in the procession.

According to the family sources, Gautam’s mortal remains will be creminated with state honor with 11 gun salutes in the Doda River.

Gautam, 30, of Punarbas Municipality was killed when the SSB opened fire Thursday morning following a dispute over a culvert construction amid ongoing tensions at the border near Anandabazar.

The Cabinet meeting on Friday declared Gautam a martyr and decided to provide Rs 1 million to his family.

Following the decision, the Home Ministry had issued a circular saying that the final rites for Gautam will be performed with state honor.

TANAHUN, Nov  24:  To put an end to the patriarchal thinking, women of Tanahun have taken the dead body to... Read More...

ILAM, June 19: Thousands of locals in Darjeeling on Sunday took out huge processions to observe “Black Day” to protest against... Read More...

SAPTARI, March 11: The funeral procession of the five persons who died as the result of the Saptari incident on... Read More...