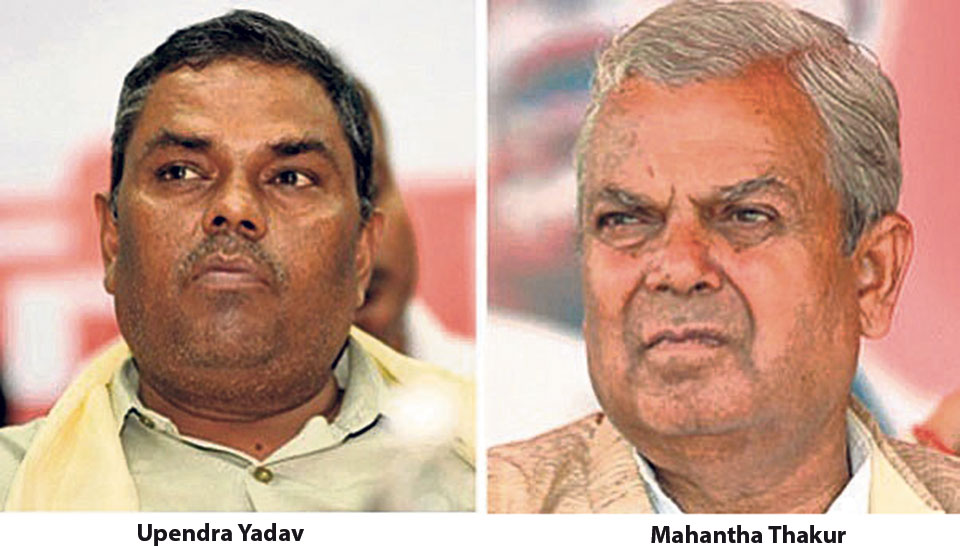 JANAKPURDHAM, Sept 19: Leaders of Federal Socialist Forum Nepal (FSFN) are sharply divided as the country prepares to celebrate the Constitution Day on Wednesday.

Party chairman Upendra Yadav is silent on the issue.

On Sunday, the working committee of the Province 2 chapter of the party published an official statement claiming that the current constitution was forced into the Madhesi people and the day it was implemented should not be celebrated as a day of achievement but as a black day. However, the Province 2 government comprising of FSPN has informed that such decision of the working committee will not be implemented by the provincial government.

However, the central office of the party has published another statement which contradicts with the decision of the provincial chapter. In a statement addressed by chief of FSFN's central office Prakash Adhikari published on Monday, it has been stated that the party has not taken any decision to mark the day as a black day. The statement directed the party members and cadres to not involve in the black day demonstration since the government has already agreed to amend the constitution.

On Sunday, releasing a statement, FSPN vice-chair Renu Yadav directed the people's representatives from the party in Province 2 not to take part in any program scheduled for Constitution Day celebration.

The working committee of the provincial chapter of the party has decided that the party members and cadres will wear black armbands around their hands, put up black flags in public places and observe a blackout for 15 minutes from 7 pm on the Constitution Day.

FSPN vice-chair and Chief Minister of Province 2 Lalbabu Raut said that he has not been informed about any protest to be organized by the party on the Constitution Day.

“I don't know what decision has the working committee of the party's province chapter taken,” he said, adding, “I will implement the directive sent by the central office.”

FSPN co-chair Rajendra Shrestha said that even thought the party is against the constitution, the party will not observe a black day on the Constitution Day.

“We protested while the constitution was being implemented, we protested even after that,” he told Republica, “Today, FSPN is in upper and lower houses. It would be better if we could make our voices heard through these platforms.”

While FSFN has been divided over the celebration of the Constitution Day, another tarai-based party Rastriya Janta Party Nepal (RJPN) has announced to stage protests all over the southern districts on September 19. The members of the party presidium, ministers of the provincial government and state ministers have been asked to address the protests in various districts.

KATHMANDU, Sept 17: The Federal Socialist Forum Nepal (FSFN) has made it clear it has not taken any decision to... Read More...

KATHMANDU, May 3: The Federal Socialist Forum, Nepal has demanded that the constitution be amended before moving ahead with the... Read More...