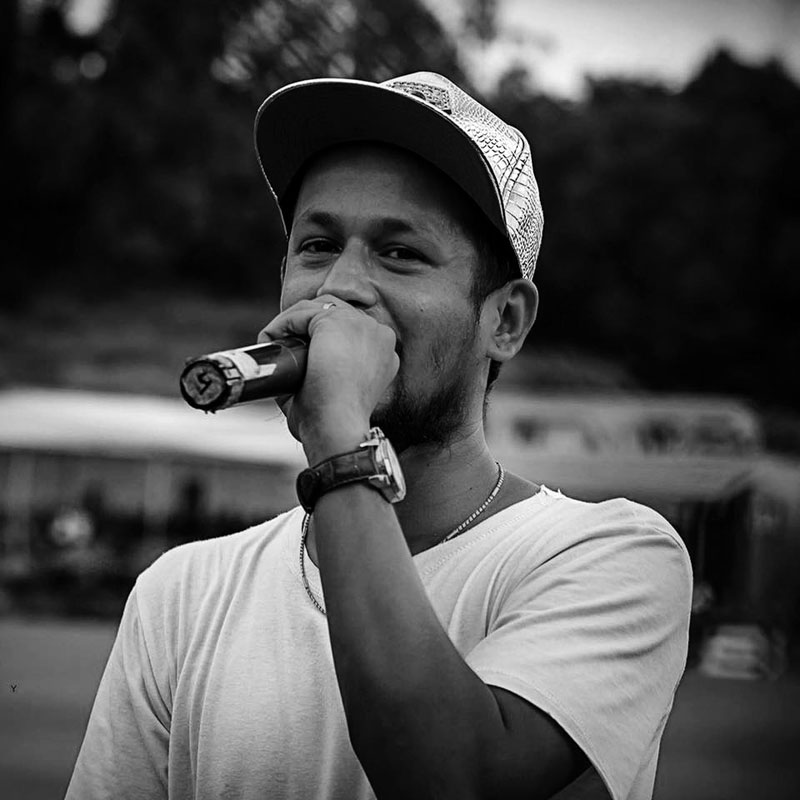 2017 began with the most horrifying news, as one of the most beloved rappers of the music industry, Anil Adhikari aka Yama Buddha was found dead at his apartment in London on Saturday. Born in 1987 in Morang, he started off his career at the age of 12. His career took a U-turn when his song ‘Saathi’ gained an incredible response from music lovers. He had released one music album on YouTube before that song. He was set to release his album ‘Khatra’ on January 15. He had also initiated an underground rap battle during 2013 in collaboration with his friend Kolin Bikram Thapa. He created a platform through RawBarz for many young rappers, inspired the hip-hop music scene in Nepal itself and redefined the meaning of rap.
Nepali personalities fondly recall Yama and their friendship with him:

To me, there are only two Buddhas, Lord Buddha and Anil himself. I used to believe that Gods are always eternal but I guess unfortunately ‘Yama’ won the battle this time. There can only be one Yama Buddha and I don’t feel anyone like him will ever be born. I was very close to him, he was a great friend. We had judged a reality show called Pattern Breakers together and since then we have always been in touch. From going for coffee together, to making songs and performing at events, we have shared a lot together. This news is really tragic and it is a devastating time for all of us. He always carried good vibes and never seemed like he was ever going through depression. He was always positive and influenced his environment along with him. I still cannot believe the news. It is a huge loss to the industry. Throughout his journey, he has inspired a generation of Nepali rappers. His songs included the bitter truths of our society and all the stories that young people could relate to. I’d like to tell to the youths that if you’re in any kind of frustration, you should at least share it with your close friends or family and try to find a way.

I knew him for a short period of time when I was just starting out in RawBarz. As a fellow rapper, he was my mentor. He was passionate about what he did; we could see it by the way he used to explain his plans and ideas. I didn’t get to know him at a personal level, but he definitely didn’t look like someone who was having any issues but then, that was three years back. He literally opened the gate for all the young and aspiring rappers out there, taught and inspired them and gave them a platform. I believe it wouldn’t be wrong to call him a legend.

I met him during 2013 when he invited me to Kathmandu for a rap battle. We have also done concerts together in many places around Nepal. He has a huge contribution in the field of NepHop.  During my last visit to UK, we had a phone call but due to our tight schedules I couldn’t manage time to meet him. Sometimes we used to talk about how to create impacts and bring a positive change in the rap genre. There was a time when raps were about either girls or money but Yama Buddha connected it with our society. His song ‘Saathi’ is an example of this. We never got a chance to do a duet song; we always talked about it. I guess this wish will forever remain come true now that he has left for the ages. Little things used to hurt him or make him happy as well. I will always remember him as a hardworking, friendly, emotional and a disciplined person. It is very difficult to believe that he is no more with us. He was a great artist and an amazing friend to me, who will forever be missed.

Anyone so young with so much passion for his work is not just a loss to the music industry but to our country as a whole. I met Yama Buddha on few occasions but did not have the privilege to know him closely. We only used to have casual conversations but it is heart-breaking to know the demise of a talented person who seemed full of life. He was a person who loved to spread happiness. His contribution to music and especially Nepali hip-hop will be invaluable as he was a step ahead in the industry. I would like to tell his uncountable followers and fans that have been grieving to stay strong and aspire greatness, just like your idol did. Yama will always be alive in our hearts through his music!

We only got to know of this tragic news this morning as we are in the middle of our Japan tour. I want to convey my deepest condolences to the bereaved family. Sadly, I never had the opportunity to meet him. But I’ve always heard nice things about Anil from some of the people of event management companies who had the good fortune to work with him. I think he had a big contribution to the Nepali music industry, especially in the hip-hop and rap genre. Every artist who manages to break barriers in any kind of artistic space will surely be remembered as a special person, and he will surely be counted among one of them.

It’s been around 4-5 years that I have known Yama Dai and I was very close to him. We’ve spent great times together. RawBarz was a great platform to all the young rappers, including myself. We had also met during his last visit to Sydney. To me, he was truly a genius and is saddening to know about his sudden demise. His music is indeed heart-touching and the lyrics are always inclined towards the realities of our society which makes it feel livelier and something that we all can relate to. This could have happened with anyone and even though it is hard to believe but maybe he was going through some hardships. He will forever be one of the greatest contributors to the Nepali hip-hop scene.