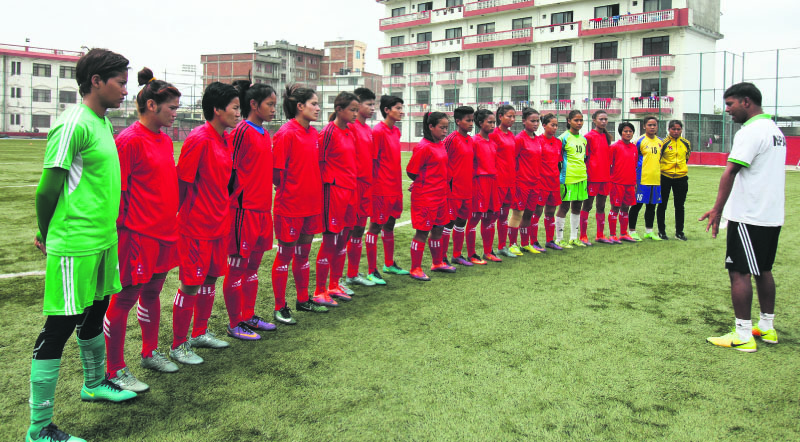 KATHMANDU, May 19: The friendly matches against Malaysia scheduled for May 22 and 24 are expected to be a solid beginning for the Nepali women's football team's preparation for the upcoming SAFF Women's Championship to be held in Nepal next year.

“Our primary target is to win the next edition of the SAFF championship and for that we have to keep our players in shape. For that, international matches besides regular training can be quite helpful,” said Kumar Thapa, head coach of Nepali women's national football team. “Therefore, friendly matches against Malaysia are going to be solid beginning for our long-term preparations.”

All Nepal Football Association (ANFA) had decided to continue Thapa as the head coach of the national women's team in order to start preparations for the championship such as regular training. As soon as getting re-appointed as the national team coach Thapa resumed the training.

“We have a young squad which needs enough international exposure if we want to make them able to taste international success. So, such friendly matches against non-South Asian sides can be a big exposure for our players,” added Thapa.

He has called up 20 players making just one change in the squad which played SAFF held from December 26, 2016 to January 4, 2017 in India. The only new face in the squad is Sajana Rana, a forward from the Armed Police Force (APF), who replaced Dipa Adhikari of Tribhuvan Army Club.

Players will be trained for 15 days before flying to Malaysia on Friday. Thapa said that the performance of the players has decreased in compared to the time of SAFF. “So, there is a need for hard work while training to improve their performance. We have traditional ways of training in departmental teams and the training is focused on physical rather than technical aspects. So the players need to be trained to be more technical,” said Thapa, “I had to work hard during the training to improve the players' performance as the players' on-the-ball quality had regressed. But now they are back to their best.”

Thapa says he conducted the training in the same way as during the preparations for SAFF Women's Championship-2016. “I try to train my players in the modern way. My training sessions are basically focused on the technical skills of players. They are trained with ball and aren't just told to get trained physically,” Thapa further explained.

He said that his team will play in the same system as in SAFF held in India. “We will opt for a similar system, that is, the 4-2-3-1 playing formation, try to play short and direct passes and push the wingers forward to help the strikers,” said Thapa.

“The understanding between these players is quite good as they have played SAFF together in the past. We have good defenders and midfielders. Our only concern at present is scoring goals,” added Thapa, “The system we are going to use requires goals from wingers and midfielders playing behind the strikers. This is where we need to improve.”

However Thapa has a plan B in case his primary plan doesn't work. “If our primary plan of playing 4-2-3-1 doesn't work, we will change it and play in 4-4-2-1 with two central forwards to pull the goals,” he said.

The Nepali team leaving for Malaysia on Friday will play both the matches against the host team at Stadium Likas of Kota Kinabalu. Malaysia which is organizing the South East Asian Games (SEA) 2017 in its capital Kuala Lumpur from 19 to 30 August, is taking the matches against Nepal as a preparation for its women's team. Earlier in a friendly held in Kathmandu at the end of last year, Nepal had defeated Malaysia 1-0 with Sabitra Bhandari scoring the only goal of the match.

"We are against only discriminatory provisions": leader Shukla