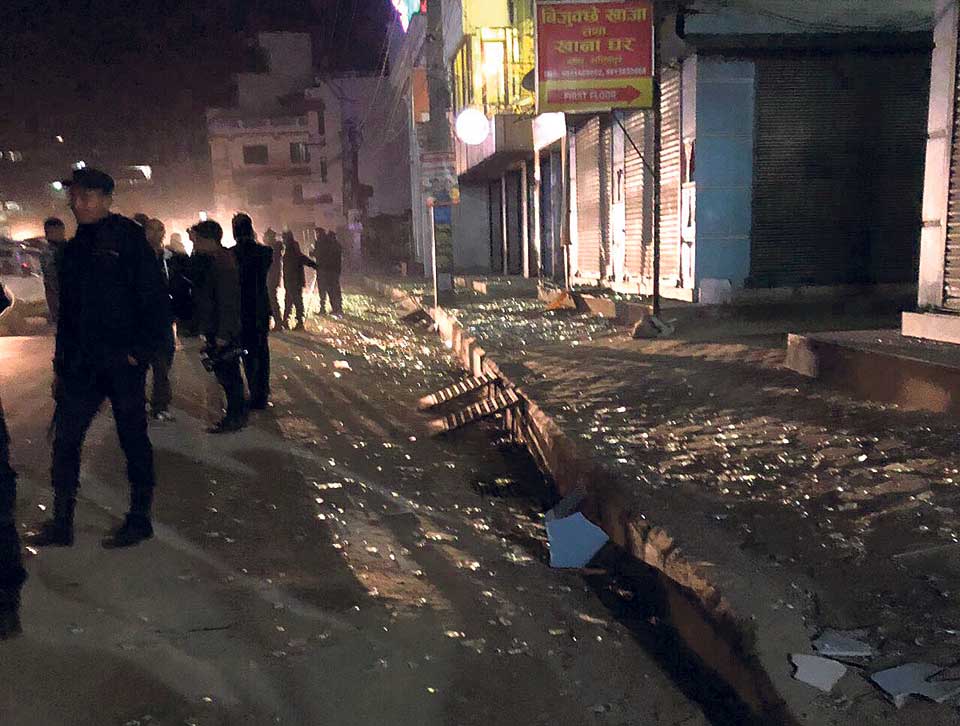 The scene outside Ncell head office at Nakkhu after explosion on Friday evening. Photo: Republica

KATHMANDU, Feb 24: On February 14, the day which marked one year of governance by the Nepal Communist Party, Prime Minister KP Sharma Oli in his address to the nation had claimed that peace and improved security were the major achievements of his government. In fact, 'peace and security' together with 'stability and prosperity' were few words that resonated throughout the prime minister's nearly an hour-long televised address to the nation.

“Peace and security arrangements have been further strengthened through effective implementation of security mechanisms. Organized hooliganism has been crushed,” Oli proclaimed.

But Friday's bomb explosions across the nation including one outside Ncell's corporate office in Lalitpur, just a few meters away from a police beat, has not only proved Oli wrong but also laid bare serious lapses, raising questions on the efficiency of the state's security and intelligence apparatus in tackling domestic terrorism.

The Lalitpur bomb explosion, which killed one and left two injured, is the deadliest act of terrorism to mar the capital since the parliamentary and provincial elections of 2017. The bomb that went off on Friday evening at Nakhkhu in Lalitpur was one of the several improvised explosive devices (IEDs) planted around NCell offices or transmission towers across the country.

No one has claimed the responsibility for the attacks. Nepal Police spokesperson Uttam Raj Subedi said that police have so far arrested sixteen suspects including six from the capital for their alleged involvement in the blasts.

“It's a case in progress. I hope that we would be able to tell a few things about those responsible for the blasts by tomorrow,” Subedi told Republica.

Since Chand formed his own party after splitting away from Mohan Baidya-led CPN Maoist in 2014, police have received multiple complaints against the party in connection to violence and extortion.

“They (Chand-led party) are also under scanner, as we have found some links. But it's too early to tell anything as we are also looking into the case through other angles,” said Subedi.

However, Chand-led party has not issued any statement.

Friday's attacks have brought back memories of the decade-long war when such explosions used to occur at usual frequency. Leaders from across the political spectrum were quick to condemn the blast. Condemning the bomb attack, Bibeksheel Nepali Party urged the government to address the demands of the opposing forces through peaceful dialogue.

Home Minister Ram Bahadur Thapa on Saturday had visited Nepal Mediciti Hospital to inquire about the condition of the injured. Thapa vowed to book those responsible for the attacks and promised support for the blast victims.

Despite Thapa's assurance, there are reasons to doubt that those responsible for the blasts would be booked. The government, despite having evidence of Chand's role in a series of blasts during the parliamentary and provincial elections, had failed to hold him accountable. Police said lack of political will, rather than inefficiency of the security agencies, was the reason behind such sporadic violence.

“If it really is Chand's works, there is little we can do. They have managed to walk scot free every time we have arrested them, due to political pressure,” a senior police official said on condition of anonymity.

KATHMANDU, May 26: Police have confirmed that the improvised explosive device (IED) has been used for the explosions in Anamnagar... Read More...

KATHMANDU, June 7: At a time when construction contractors are mounting pressure on the government against making any changes to the... Read More...

Rainfall likely to continue for three more days
29 minutes ago