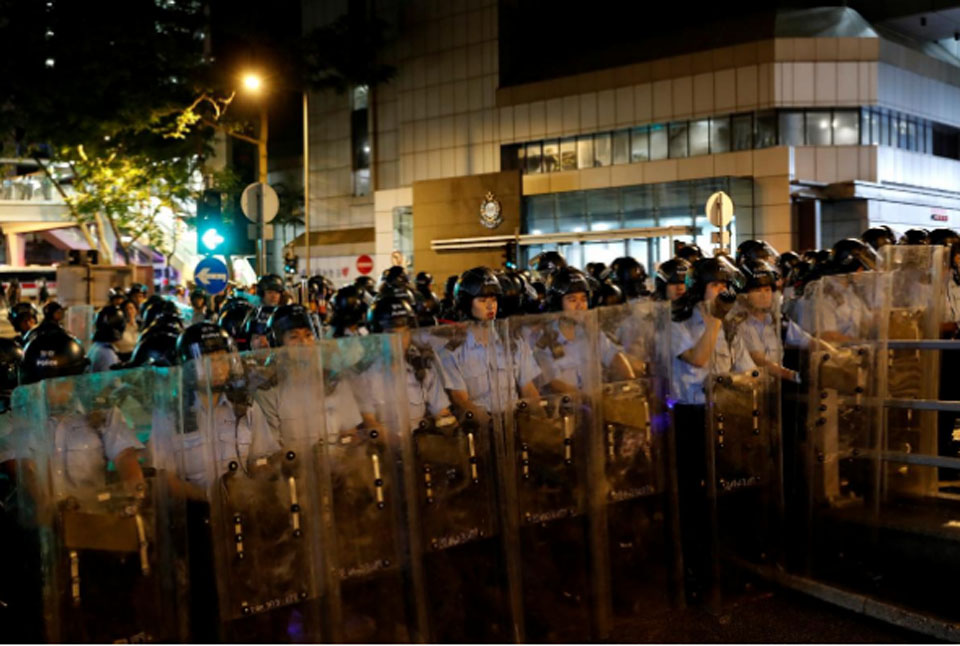 Riot police clear the area outside police headquarters, after a rally ahead of G-20 summit, urging the international community to back their demands for the government to withdraw the expedition bill in Honk Kong China, June 27, 2019. REUTERS/ Tyrone Siu

HONG KONG, June 27: Hundreds of demonstrators rallied on Thursday outside the office of Hong Kong’s justice secretary after another night of protests over a suspended extradition bill that has plunged the Chinese-ruled city into a political crisis.

Millions have thronged the streets in the past three weeks to demand the bill, which would allow criminal suspects to be sent to the mainland for trial in courts controlled by the Chinese Communist Party, be scrapped.

Early on Thursday, riot police wielding batons and shields chased dozens of protesters who had besieged police headquarters through the streets of Wan Chai, a popular nightspot.

The government said while it respected the public’s right to peaceful assembly it was unacceptable for protesters to block roads and surround police headquarters.

The demonstrators have seized on this week’s G20 summit of world leaders in Japan to appeal for Hong Kong’s plight to be put on the agenda, a move certain to rile Beijing, which has vowed not to tolerate such discussion.

“We know that the G20 is coming. We want to grasp this opportunity to voice for ourselves,” said Jack Cool Tsang, 30, a theater technician who took a day off work to protest.

The protesters are also demanding the government release those arrested and investigate what they describe as excessive use of force by police officers.

Images of police firing rubber bullets and tear gas beneath gleaming skyscrapers this month near the heart of the financial center grabbed global headlines and drew condemnation from international rights groups and protest organizers.

Hong Kong leader Carrie Lam, who has kept a low profile over the past few days, suspended the bill a day after the violent protests but stopped short of a full withdrawal and rejected repeated calls to step down.

The demonstrations, which pose the greatest popular challenge to Chinese President Xi Jinping since he took power in 2012, have repeatedly forced the temporary closure of government offices, blocked major roads and caused massive disruptions.

Since Hong Kong returned to Chinese rule in 1997, it has been governed under a “one country, two systems” formula that allows it freedoms not enjoyed in mainland China, including the liberty to protest and an independent judiciary.

But many accuse China of increased meddling over the years, by obstructing democratic reform, interfering with elections, suppressing young activists, as well as being behind the disappearance of five Hong Kong-based booksellers who specialized in works critical of Chinese leaders.

Opponents of the extradition bill fear being placed at the mercy of a justice system rights group say is plagued by torture, forced confessions and arbitrary detentions.

Rally, sit-in and relay hunger strike at BPKIHS in support of Dr KC

Bomb goes off near election rally attended by Oli

DANG, Nov 22: A bomb has gone off near an election rally attended by CPN-UML Chairman KP Sharma Oli in... Read More...

DHANGADI, Oct 8: A rally was taken out today against the ritualistic animal sacrifice in the district at a time... Read More...

Rumors of political change intensify in Nepal after R&AW chief’s visit
49 minutes ago
NC demands govt rescue the students who were attacked in Dehradun, India
18 hours ago
World Bank to provide Nepal over Rs 9 billion for project to boost agro sector, support post-pandemic recovery
23 hours ago