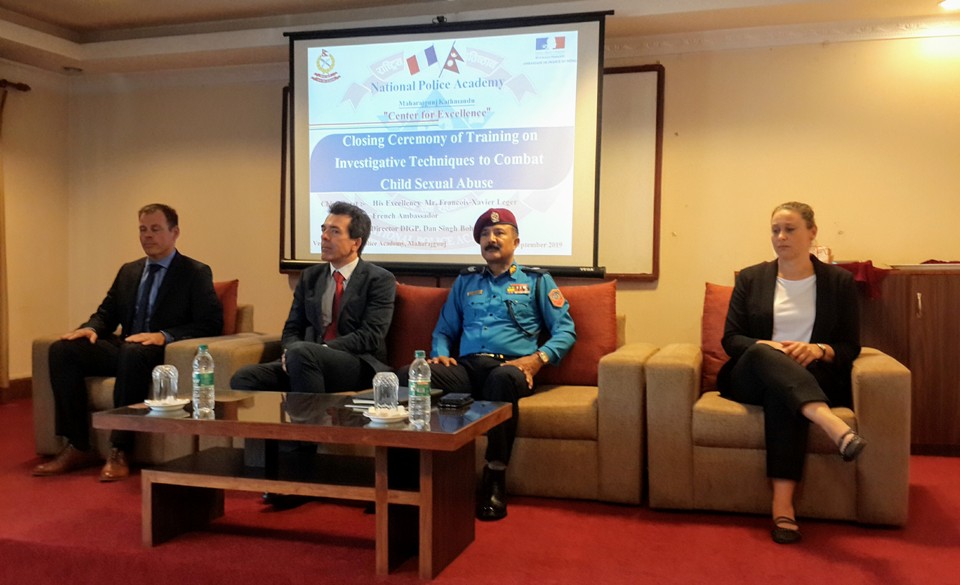 KATHMANDU, Sept 6: French Embassy in Nepal organized a four-day training program for officers of the Nepal Police at the National Police Academy, Maharajgunj in Kathmandu.

The training focused on investigation techniques to combat child sexual exploitation, according to the embassy.

French instructors taught different investigation techniques such as methods of the interview (victim and offender), searches, dedicated forensic researches, and cyber investigation during the training, according to a press release issued by the embassy on Friday. 19 personnel from Nepal Police and 1 officer from Armed Police Force participated in the training program.

The closing ceremony was held on Friday at the National Police Academy in which the certificates of completion were handed over by French Ambassador to Nepal François-Xavier Légér.

On the occasion, French Ambassador Léger said, “This is the third training of its kind organized by the French Embassy along with Nepal Police to combat sexual exploitation of children.  This confirms our commitment to a common goal, protection of our children and our mutual will to strengthen our bilateral police cooperation to achieve that goal.”

Similarly, DIGP Bohara expressed gratitude to the French government for conducting the training. The training had started on Sept 2.

BAJURA, April 26: Only women know how difficult periods become due to the added burden from society. Still, a large number... Read More...

KATHMANDU, Nov 7: In order to make the Tihar festival peaceful and safe, police have launched a campaign to control the... Read More...