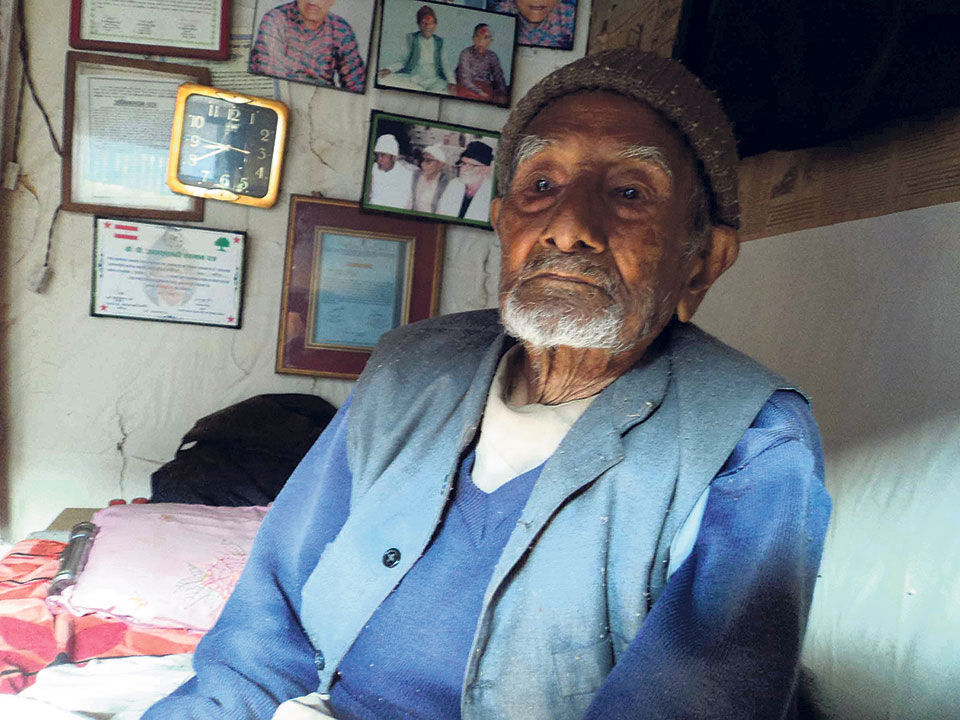 Fighter for Democracy Manisundar Bajimay who died at the age of 105 on Wednesday. Photo: Republica

KHOTANG, Nov 11: Manisundar Bajimaya, who fought all his life to bring democracy and earned himself the recognition of Khotang's freedom fighter died at 105 on Wednesday.

Bajimaya who was born on November 13, 1913, died at his own residence in Diktel Rupakot Majhuwagadhi Municipality-1. He was cremated on Thursday amidst a special program where locals and delegates paid him respect for his immense contribution. Nepali Congress (NC), Khotang, took Bajimaya's body to BP Memorial Building where the party organized a condolence assembly for him.

NC leaders and members Bal Bahadur KC, Narayan Khadka, Subash Kumar Pokhrel, Saraswoti Bajimaya among others expressed their condolences over the telephone. Family members cremated Bajimaya according to the Newari rituals. He had been an active member of NC since 1950.

Bishnu Kumar Rai, former chairperson of NC's district chapter said that the death of a warrior who devoted his life to establishing democracy is a great loss for the party and the country. NC's district chapter has announced to fly the party flag at half-staff and not hold any official program for a week in honor of Bajimaya, who is survived by two sons and three daughters.

In 1950, the Rana rulers were preparing to jail Bajimaya for protesting against them. Acting on a tip-off, Bajimaya went to Darjeeling and stayed hidden for three years. After the Rana oligarchy was thrown, he continued his fight against the Panchayat regime also. He was compelled to live in the jungles of Siraha when the then King Mahendra publicly announced to hang him for campaigning against his regime. He was arrested in 1961 while attacking the then administrative center Aiselukharka. He was jailed for five months.

He was equally active in the movement for the restoration of democracy in 1979 and 1989. He was arrested numerous times during and after the movement. Acknowledging his struggle and dedication, NC honored him thrice - in 1999, 2011 and 2014.

KHOTANG, Oct 14: A couple from Khotang, a rural hilly district in eastern region of Nepal, has ventured into promoting... Read More...

Implications of Assange’s persecution for journalism and democracy

LONDON, June 20: If the U.S.-led campaign to extradite and silence Assange is successful, it will invariably become the blueprint... Read More...

Had there been regular local elections in the past two decades, the self-correcting mechanism of democracy would have thrown out... Read More...