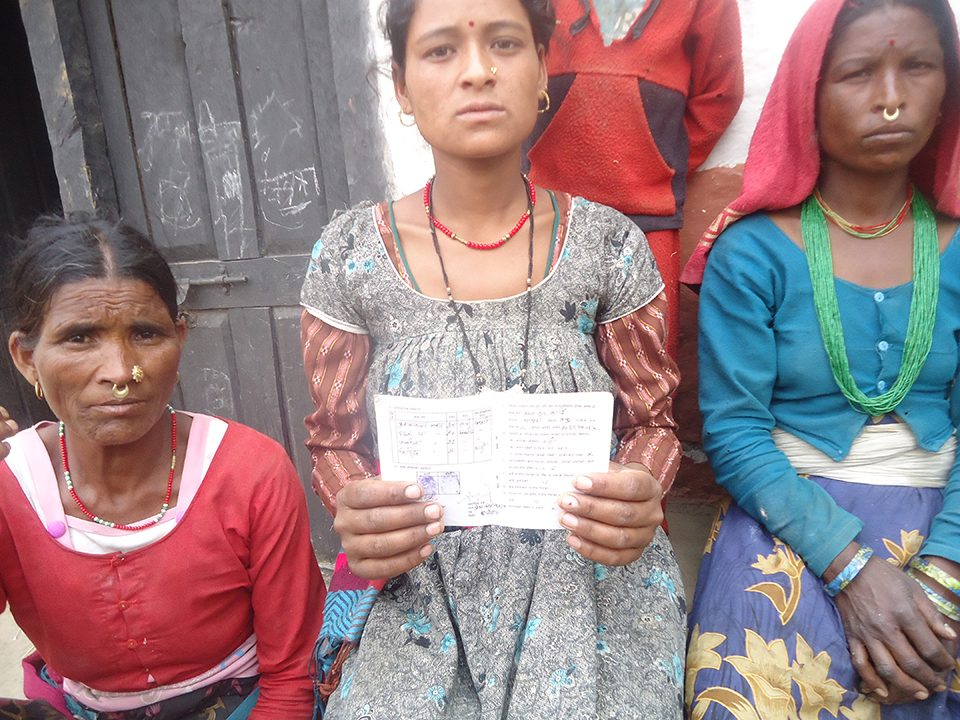 “As we struggle to buy food, seeking treatment is completely out of reach,” said Ghiru Lwar, 62, of Bajura.

BAJURA, March 20: It has already been a decade since Bishnakala Lwar, a local of Budinanda Municpality-1 in Bajura district, has had stomach-related ailment. Her abdomen hurts when she works. It hurts even when she sleeps. And it hurts when she walks. In her family, nobody besides her husband knows about the ailment. Despite the illness, she has been forced to continue her works disregarding the pains.

Lwar tried some domestic cure. However, it has only worsened her condition. The nearest health facility, Kolti Primary Health Center, is half an hour walk away. Although she visited the health post, the health workers there are unable to help her. They have told her that she may have to undergo surgery and suggested to seek treatment outside the district.

Lwar, who used to work as bonded farmer before the abolishment of Haliya system, still struggles to make a living. The family can barely afford two square meals a day. In such situation, leaving the village to seek treatment is far from their reach.

Her husband still works in the farms. Besides agriculture, the family has no other source of income. Even the house they are staying in belongs to others. She cannot even imagine spending money for treatment. Lwar's situation resonates that of many other freed Haliya women in the district.

Bishu BK of Pipaldadi, a mother of five children, suffers from uterus prolapse. Instead of getting proper rest after birth, she had to toil hard to make a living. She also lacked proper diet, leading to her weakened state.

“I had pain in my lower abdomen since giving birth to my first child. At that time, I had no knowledge about the pain. After one-and-a-half years of the pain, I visited a health camp organized in Kolti. Then I came to know it's a uterus prolapse,” said BK.

According to her, doctors at the camp suggested her to visit Nepalgunj for treatment. However, she does not have enough money even to pay for transportation fare, let alone pay for the surgery she requires.

“With no other means, I have no choice but to suffer the pain silently,” she added.
The situation of Ghiru Lwar, 62, is no different. A mother of seven children, it has already been more than a decade since she got uterus prolapse. She had also visited the same health camp and the doctors there had made the same suggestion: visit Nepalgunj for treatment.

“The pain started after I gave birth to the third child. As we struggle to buy food, seeking treatment is completely out of reach,” she said.

Like them, people of the highly underprivileged Haliya community, especially women, suffer from various ailments. The district, one of the most undeveloped in the country, does not have reliable health facilities.

Most of the residents, who are in dire state of poverty, cannot afford cure outside the district. With no savings and the earning barely enough to survive, people like them are forced to suffer the pain silently.

Their situation is so pathetic that many of the families depend on loans to purchase two square meal a day. Consequently, financial constraints have proved to be hindrance to seeking treatment for such serious ailments.

It costs at least Rs 5,000 to Rs 10,000 to seek treatment in Nepalgunj. With additional cost of lodging, foods and other expenses, they would have to spend a minimum of Rs 20,000 in total. Not everyone can afford this, they say.

In the name of Haliya welfare, many big organizations have already spent millions of rupees. NGOs like Care Nepal and Action Aid among others have been splashing huge amount of money for the welfare of Haliyas since the last decade.

Considering the amount of money spent, it may give the impression that former Haliyas are in much better state now. However, the ground reality is totally different. There has been little to no improvements in their livelihood.

According to human rights activists, none of the stakeholders have interest in welfare of the liberated Haliyas. “Their problems have remained the same. They are still forced to struggle for meals,” said activist Gorakh BK.

Of late, there have been multiple programs to uplift the living standards of freed Haliyas. Income generating programs, skills training and rehabilitation programs for Haliyas have made the top list of reports of various NGOs. However, only few have benefited from such programs.

The Haliya system was found in 12 districts of far-western and mid-western regions. Government data shows that there are over 11,000 liberated Haliyas.

Depending on their financial status, the government has provided them certificates with A, B, C and D categories in order to efficiently target them for various rehabilitation programs. With their plights intact, Haliyas are waiting to see what their future holds.

DOTI, March 15:  Scores of women have been suffering from the uterine prolapse in the far-western region. ... Read More...