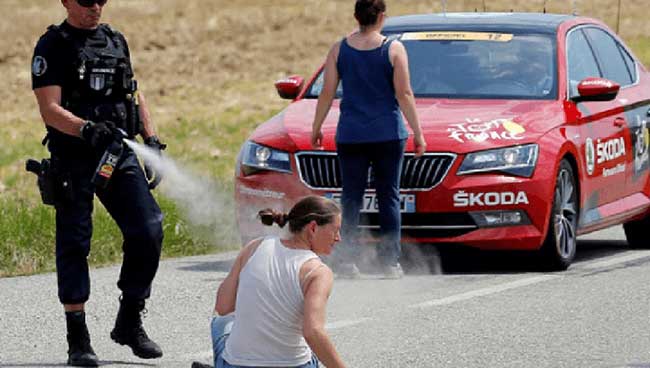 PARIS, July 25: The Tour de France, one of the cycling's three Grand Tours came to a halt during Stage 16 when a group of cyclists in the race were sprayed during a protest by French farmers.

Local farmers brought the Stage 16 of the race to a halt Tuesday after bales of hay were thrown on to the road on the route from Carcassonne to Bagneres-de-Luchon prompting the police to fire tear gas resulting in obstructing the riders' vision.

The gas was used to disperse the protesters but it ended up blowing in the direction of the peloton, which led to the race the 187 km-to-go point, Reuters reported.

An image shows a policeman using a spray on protesters which then blew into the peloton, as riders pulled over to douse their eyes with water. News sources pointed out there was a delay of around 15 minutes.

Some of the people seen rinsing their eyes include the Yellow jersey holder Geraint Thomas and world champion Peter Sagan.

An investigation has been opened to look into the incidents.