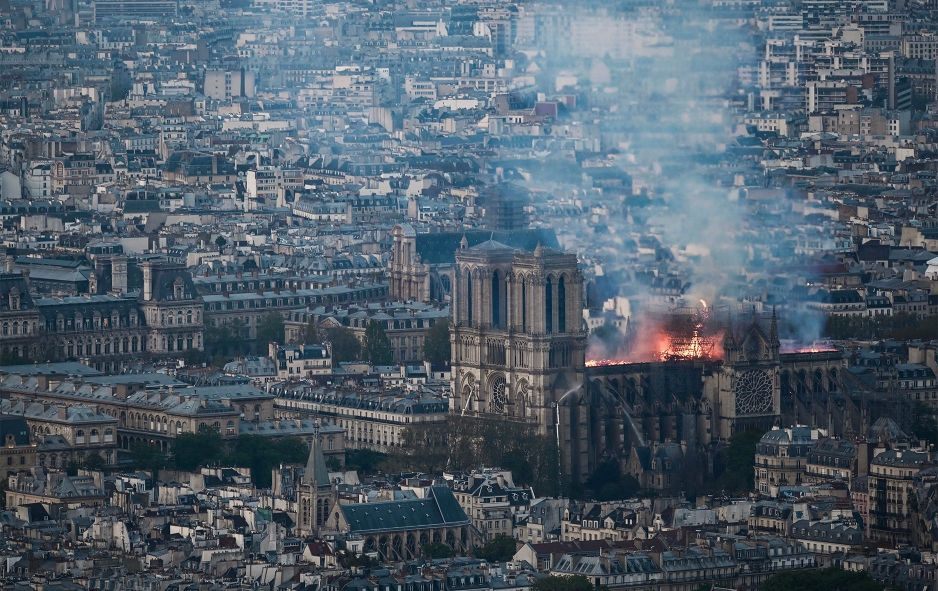 PARIS, April 17: France will invite architects from around the world to submit designs for rebuilding the spire of Notre-Dame cathedral that was destroyed in a devastating blaze, Prime Minister Edouard Philippe said Wednesday.

The goal is "to give Notre-Dame a new spire that is adapted to the techniques and the challenges of our era," Philippe told reporters a day after President Emmanuel Macron vowed to rebuild the cathedral "even more beautifully" within five years.

Thousands of Parisians and tourists watched in horror Monday as flames engulfed a monument that has symbolised Paris for nearly a millennium, toppling the spire and gutting a large part of the roof.

No sooner had firefighters extinguished the flames than pledges of donations towards rebuilding it began to pour in.

Within 24 hours, the pledges had reached more than 800 million euros ($900 million), with French business magnates and corporations jostling to outshine each other with displays of generosity.

But the slew of announcements raised eyebrows in France, with some leftist politicians arguing that the ultra-rich could best help protect the country's cultural heritage by fully paying their taxes -- or helping the "human cathedral" of people in need.

The huge tax breaks available on the donations also caused some unease, prompting Francois-Henri Pinault, the billionaire CEO of the Kering luxury goods empire, to announce he would forfeit his rebate.

"The donation for Notre-Dame of Paris will not be the object of any tax deduction. Indeed, the Pinault family considers that it is out of the question to make French taxpayers shoulder the burden," Pinault said in a statement.

Pinault had led the pledges of donations starting Monday night with a promise of 100 million euros.

POOL/AFP / LUDOVIC MARINRisking their own lives as they toiled through the night, firefighters formed a human chain to rescue a swathe of Notre-Dame's "priceless treasures"

Billionaire Bernard Arnault and his LVMH luxury conglomerate, Total oil company and cosmetics giant L'Oreal also each pledged 100 million euros or more, while US tech giant Apple said it would give an unspecified amount.

French corporations are eligible for a 60-percent tax rebate on cultural donations.

The government said Wednesday that number would remain unchanged, but increased the rebate on individual donations for Notre-Dame of up to 1,000 euros to 75 percent. Bigger private donations would qualify for the standard 66 percent rebate.

On Tuesday evening, Macron set out an ambitious timeline for rebuilding the cathedral, an enduring symbol of Paris that had survived revolutions and wars throughout the ages.

"We will rebuild the cathedral even more beautifully and I want it to be finished within five years," Macron said in an address to the nation, in which he hailed how the fire had shown the capacity of France to mobilise and unite.

In a sign of the monument's resilience, the copper rooster that topped its spire was found Tuesday in the rubble from the partly collapsed roof, "battered but apparently restorable" according to a spokesperson for the culture ministry.

The walls, bell towers and the most famous circular stained-glass windows at France's most visited tourist attraction also remain intact.

But the floor of the nave was left covered in rubble and scorched beams from the fallen roof.

Macron's announcement of a five-year timeframe indicates he wants the reconstruction to be completed by the time Paris hosts the Olympic Games in 2024.

But some experts have warned a full restoration could take longer, with one of the biggest tasks involving replacing the precious oak "forest" of beams that held up the roof.

"I'd say decades," Eric Fischer, head of the foundation in charge of restoring the 1,000-year-old Strasbourg cathedral, told AFP.

Germany, Italy and Russia are among the countries to have offered expertise.

In France, meanwhile, political parties continued to observe an unofficial truce after months of mutual finger-pointing over the violence that has marked the "yellow vest" protest movement.

Macron said the dramatic fire had brought out the best in the country, showing the French to be "a nation of builders".

The bells of French cathedrals will sound at 1650 GMT on Wednesday, exactly 48 hours after the fire started.

Investigators trying to determine the cause of the blaze are questioning workers who were renovating the steeple, an operation suspected of accidentally triggering the blaze.

The police have already spoken to around 30 people from five different construction companies.

Public prosecutor Remy Heitz has said the investigation threatened to be "long and complex".

Junior interior minister Laurent Nunez said Tuesday that although "some weaknesses" had been identified, overall the building was "holding up OK".