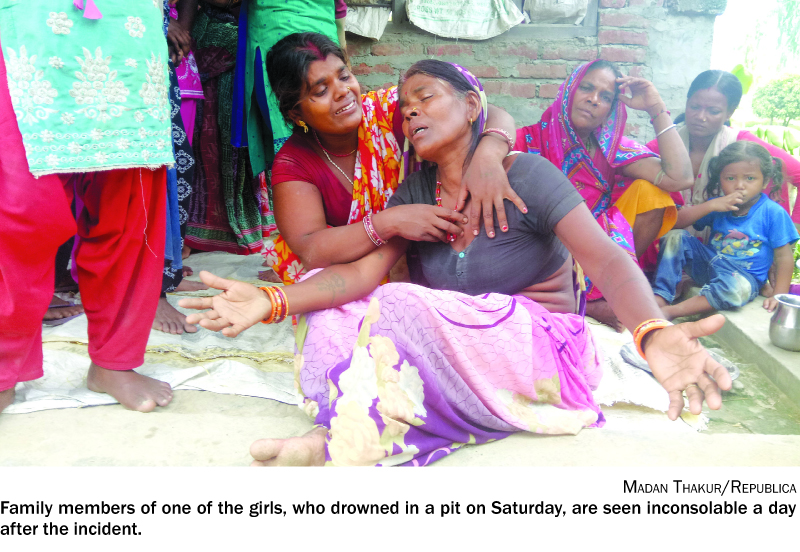 RAUTAHAT, August 6: The four children, who died after drowning in water-filled ditch in Rautahat on Saturday, have been cremated en mass a day later. Locals, school children and parents mourned their death and paid them a final homage before the cremation.

The District Administration Office (DAO), Rautahat, provided some amount for performing the final rites to families of the victims, according to Superintendent of Police (SP) Yagya Binod Pokharel, chief of District Police Office, Rautahat.

Before the cremation, the victims' families had kept the bodies on the road demanding compensation, investigation into the incident, and action against those guilty of leaving the open ditch unburied that led to the unfortunate incident. Locals have demanded serious investigation into the issue and action against those found guilty of negligence.
Prahalad Sah, proprietor of Durga Construction Service, who was given the contract by the Department of Roads (DoR) for the construction, has been taken under custody by police for investigation. There is an ongoing debate whether the contractor or the DoR is to blame.

Locals have raised questions on who should take the responsibility to fill the potholes and ditches left on the roads. According to Ram Krishna Chaudhary, former vice chairman of Garuda VDC, each department should be properly briefed about their responsibilities prior to handing them the contracts.

The blame game among the concerned authorities has ensued in the aftermath of the incident. The DoR has claimed that it is the responsibility of the contractor to fill the potholes and open pits along the roads.

DoR chief Suman Yogesh refuted the blame put on his department and said they will now instruct contractors to fill potholes on roads before handing over any contract.