Cows killed after falling off a cliff at Selfiedanda in Birendranagar Municipality, Surkhet on Friday. Locals said the cows were brought in trucks early in the morning on Friday and then pushed over the cliff. Photo: Nagendra Upadhyaya/Republica

SURKHET, Aug 31: When Krishna Prasad Kharel of Birendranagar–14 was about to open his eatery located at Katkuwa Chowk of Surkhet–Dailekh road section on Friday morning, he noticed many dead and injured cows around. It was just 5 am and he informed the district police office, Surkhet immediately.

People gathered in a while and there was no clue who or what force might have killed those cows. “We noticed nine cows and everyone looked shocked,” said Kharel. “They seemed to have fallen from the cliff above.”

Also according to Yam Lal Giri, chief of Environment and Monitoring Division of Birendranagar Municipality, apparently it looks so. “Selfiedanda is a slopy cliff. Apparently, the cows have been forced down from the vehicles which carried them. The driver reversed gear and the cows were dropped,” he said.

Giri informed that over 150 cows have been injured. And the number of dead cows could grow as some of the cows are severely injured. “At least 30 among the injured cows are critically injured,” he said.

When police reached the spot, it was almost 8 am. The cattle were seen scattered over three and half kilometers starting from Selfiedanda to Devkota Cottage. While only nine cows were noticed dead in the beginning, toward the evening the number reached 16 . 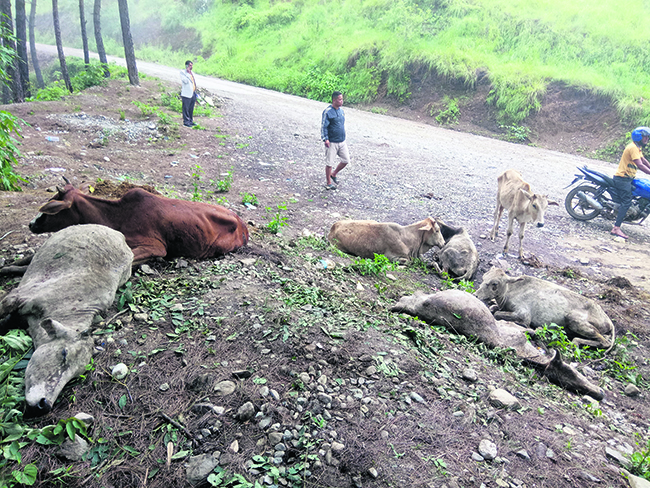 Dead and dying cows near Selfiedanda in Birendranagar Municipality of Surkhet pictured on Friday.

According to the District Police Office Surkhet, 291 cows were brought from Nepalgunj Sub-metropolis toward Surkhet and abandoned in forest areas from Bheri bridge to Devkota Cottage.
“The cows must have been left in those areas between 3.30 to 4 am Friday. Since they did have a letter from the District Administration Office, we did not interrogate them much,” said DSP Rabi Rawal.

According to DSP Rawal, ‘Chitwan Carrier’ had brought the cows in eight trucks from cow sheds located at Phultegra of Nepalgunj sub-metropolis–21. Police have already arrested the drivers of five of the trucks.

“We have arrested five trucks and drivers from Babai area of Surkhet- Nepalgunj border. Investigation is on,” he said.

Meanwhile, DIG Purna Chandra Joshi, police chief of Karnali Province, stated that action would be taken against the guilty. “The matter is under investigation, guilty will be punished,” he said.
Stray cattle menace has left Nepalgunj uneasy since some time. Reportedly, cattle from India which enter from across border have massively added to the problem.

KATHMANDU, Aug 31: The government has formed a four-member committee to investigate the recent mass death of cows in Surkhet. Read More...

JAJARKOT, Feb 7: A group of Raute people from the forests of Surkhet has reached Jajarkot in search of food.... Read More...

Will the budget be a sharp departure from the previous ones?
22 hours ago

Govt presents a budget of Rs 1,474 billion for fiscal year 2020/21 (with full document)
2 hours ago
VIDEO: Post-budget discussion
11 hours ago

Rs 5.02b allocated for displacing improvised cable crossings
14 hours ago